Just tasted a bit on the tip of a butter knife, the first word that came to mind was "savory"

I'm going to try it in the morning on toast w/ butter.

They look like what we call English Muffins. I eat them all the time. 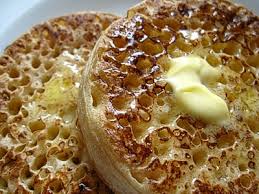 I love it, my family loves it and I would say it's very popular over here. The only person I know who disliked it was a Hungarian guy, who said it reminded him of ration food he had to endure when he was conscripted into the Russian Army.
1 Reply
1
Reply Sat 12 Apr, 2014 05:09 pm
@Lordyaswas,
Stupid youtube.

Nope, no scones for me thanks, I'll pass.

It was at Skeeters Big Biscuits in Gainesville, Fla.

I was appalled that people where eating these doughy lumps.
It looked like something that would kill you if you ate an entire one.

Legacy of Skeeter's lives on years after closing

The biscuits were large and lard-filled, the portions gargantuan and the prices low.

Skeeter's Breakfast House was a starving student's dream, and Dave Ebel, 45, kept dreaming about the Gainesville mainstay long after he graduated from the University of Florida in 1986 and moved away.

"It was just one of those places you'd go after late-night football celebrations, with large crowds and a long wait to be seated," Ebel said. "They had this huge biscuit served on top of hash browns, and eggs any way you liked them. The meals were just huge, and priced very well for college students, and I'd always hoped I'd bring my family back for breakfast."

When Ebel moved back to Gainesville last year for his wife's job, he was heartbroken to learn that Skeeter's had closed, and wrote to Since You Asked to find out what happened.

Those living in Gainesville in the 1990s likely followed the saga that eventually led to Skeeter's demise in 1995.

There's no debate. Marmite is an inferior product!

Vegemite rules!
2 Replies
1
Reply Sun 13 Apr, 2014 11:28 am
@margo,
I know that Marmite is a by product of Guinness. What does Vegemite come from?
My lad loves Marmite, so I'll be interested to know what he makes of Vegemite while he's there. When I tried it, it was sort of OK, but didn't have the same 'smack' as Marmite. I ended up spreading it a lot thicker.
0 Replies