The Prom Dress Controversy: Not Enough Straps, Too Much Cleavage?

Forums: Teens, Proms, School Dress Codes, Prom Dress
Email this Topic • Print this Page
Reply Thu 13 Jun, 2013 04:27 pm
It's prom season again, and female middle school and high school students are once again facing all sorts of dress codes about what they can or cannot choose to wear to the prom.

In one New Jersey middle school, strapless dresses were banned because of possible "wardrobe malfunctions"--beside the distracting effect they might have on boys..

As a compromise, board members said they will allow single-strap gowns and clear spaghetti straps at the June 12 off-campus dinner-dance.

The issue has divided this small Hunterdon County community of 16,000 about 35 miles west of New York City and resulted in the district canceling another dance scheduled April 26 at Readington Middle School after the principal received an emailed threat. Police did not consider the threat credible.

"Kids are fighting among themselves and saying, 'Your mother said this' and 'My mother said that,' " said Angie Gibble, mother of a middle school student who thought the cancellation of Friday's dance at the school, which has an enrollment of about 800, was a passive-aggressive message from administrators to say: "Keep fighting us (and see what happens)."

The board's special meeting Wednesday came a week after more than 50 students and parents packed its previous meeting, mostly to lambaste Principal Sharon Moffat's dress policy, which many parents considered arbitrary and sexist.

One reason the issue became such a hot topic: Some parents said Moffat told them strapless dresses would be too distracting for boys. New York news website Gothamist likened Moffat's reasoning to "slut-shaming," or blaming women for the sexual harassment or assault they experience.

"If we handle the issue of a strapless dress at an eighth-grade dance this poorly, how in the name of God are we making good decisions on a daily basis about the important things?" Gibble said.

Board members Wednesday didn't mention boys. Instead, they cited the reason that Capistrano Valley High School officials in Mission Viejo, Calif., put on their website when they declared the school's winter formal would have a dress code: fear that a strapless gown could fall while students are dancing.

The Southern California school officials suggested sewing on ribbon, clear plastic or spaghetti straps to be in compliance.

Readington Superintendent Barbara Sargent said no such mishap occurred previously, but Moffat, whom Readington hired during the summer, was aware of an incident in her former district.

"It is the board's position that the risk of a wardrobe mishap — either intentional or unintentional — and the possibility of the dissemination of such an occurrence through social media should be mitigated," board member Laura Simon said in a prepared statement. "The distress this may cause any student is not a risk this board is willing to take."

The board was split on whether the principal's rule should stand. A vacancy on the nine-member panel allowed for 4-4 votes on two rounds of voting on dueling policy suggestions. Eventually, the board decided in a 6-2 vote to keep the ban but allow single-strap dresses and clear spaghetti straps.

Two board members changed their vote after the board's youngest member, Vincent Panico, 21, said that when he was in eighth grade a girl he knew in another school district had a gown mishap that was caught on camera, then shared with her peers.

That woman still suffers "physical and emotional scars" from the aftermath of that incident, Panico said.

"A strapless dress ban would have prevented that," he said.

The board also said it would appoint a committee of educators, parents and students to review the policy for the future.

Jim Johnson, a father of two boys in middle school and a daughter in kindergarten, said the media bullied Moffat. Parents and students appeared on Good Morning America and other national news programs; TV cameras came to the board meetings.

Kaitlin May, a 14-year-old eighth-grader who disagreed with the policy, defended her principal as an amazing woman who has handled the controversy "very well and with a lot of grace."

"She should not be having death threats," May said. "Something like that is completely ridiculous. We have so many problems in this country and so many controversies that strapless dresses in little Readington should not cause so much commotion."

And this teen was denied entry to her senior prom allegedly because her dress revealed too much cleavage.
http://abcnews.go.com/blogs/headlines/2013/06/teen-turned-away-from-prom-over-cleavage-wants-apology/ 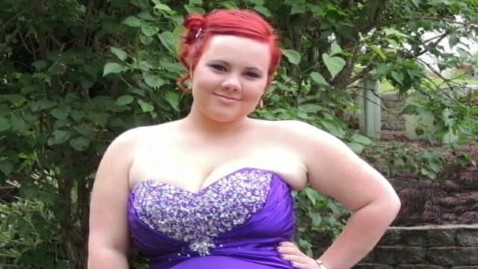 Last year, the Wall Street Journal reported on schools with extreme prom dress codes, such as a high school in Cedartown, Ga that hung posters in the hallways of “acceptable” and “unacceptable" dresses. Another high school outside of Oklahoma City gave a PowerPoint presentation on their 12-page dress code.

But perhaps the most serious high school prom story happened this past March, when high school seniors in California were told they needed to wear “gender appropriate” attire to their prom. School officials told female students that they could not wear tuxedos and that male students would be required to wear them.

"Any student should be able to wear whatever they want no matter if they are boy or girl, because it’s what they feel comfortable in," Amber Stanford, a junior at the school, told NBC 4 News.
http://www.huffingtonpost.com/2013/05/01/prom-dress-code-high-scho_n_3194215.html


So, where do you stand on the strapless/cleavage/short prom dress controversy? Are dress codes of this sort needed? Do they make sense? Are they sexist?

Should prom dressing have to be "gender appropriate"?

In one New Jersey middle school, strapless dresses were banned because of possible "wardrobe malfunctions"--beside the distracting effect they might have on boys..

That is not a malfunction.
0 Replies
5
Reply Thu 13 Jun, 2013 09:04 pm
@firefly,
It's a prom for crying out loud. The dresses are supposed to be stunning, beautiful, something the girls will enjoy wearing, and their date will enjoy seeing them in. The nonsense of boys being distracted is just that: nonsense. They are teenage boys and their hormones will run wild even if the young lady is wearing a potato sack.
Strapless or showing cleavage, or miniskirt, what is the problem? There's far less cloth covering them at the local pool or beach.

What exactly is 'gender appropriate' for prom dressing? If a young lady wants to wear a tux, or a pant suit then let her. If a young man feels wearing a t-shirt and torn jeans is appropriate and his date has no objection, why not allow it? If for some reason he wants to wear a peach color satin gown, then let him have at it. It's not going to physically hurt anybody.

Personally, I am against dress codes at proms. This is meant to be a special and fun event for these youngsters and they should be allowed the freedom to choose their own outfit. The majority will choose something which is fetching and completely decent, as they too want it to be pleasant night to remember.