Justice Begins with Seeds. PROGRESS is being made. As the result of the OSGATA v Monsanto lawsuit, farmers can now sue for gmo cross contamination of their organic crops without the fear of a counter suit for patent infringement. Thank you, Jim Gerritsen, for all you do!

I have no problem with China selling meat in the US but, why unlabeled? This stinks!

0 Replies
1
Mon 4 Nov, 2013 05:54 pm
An innovative, non-lethal approach to pest management has the potential to become a 'game-changer' in providing lasting and effective control in a wide range of insect and animal pests, according to New Zealand scientists developing the technique. Researchers from the University of Otago, the University of Western Australia, the Ministry for Primary Industries, and Landcare Research have published findings about their proposed 'Trojan Female Technique' (TFT) in the prestigious journal Proceedings of the Royal Society B. Read more: http://ow.ly/qpNov 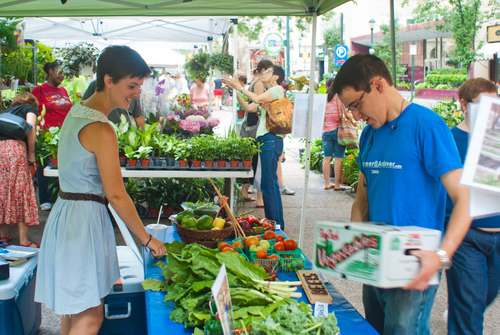 Add your own local farmers market images here if you like 0 Replies
1
Mon 11 Nov, 2013 02:24 pm
@RexRed,
Cuba implemented a Nicholas-like policy under the leadership of Castro after the Cuban Revolution.

Farming related reforms speak to community perception as well as governance localization, and for the modern age of media-tech euphoria, grassroots perspectives offered by such reforms guide society towards mass communication of agrarian IQ. Not surprisingly, related organizations such as Greenpeace and the American Farm Network can be found advertising and communicating on the human networking Internet site Facebook.