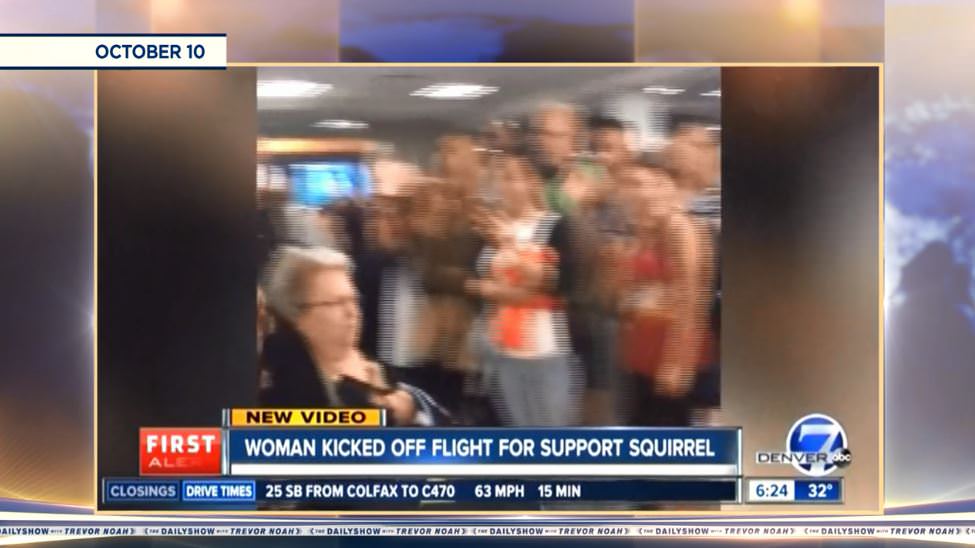 I have about 100 squirrels in my yard - I am sure she could pick up one where ever she is going.

Investigators dig for bomb motive, warn more could be found

Homeland Security Secretary Kirstjen Nielsen, in an interview Thursday night with Fox News Channel, acknowledged that some of packages originated in Florida.

not exactly odd, strange or bizarre that there is a Florida connection. It's just the Florida way
0 Replies
3
Reply Fri 26 Oct, 2018 11:06 am
you'd think someone noticed this van

maybe it's the Florida norm?

Fortunately, judging by her picture, I don’t think she keeps much frozen or fresh produce around.

Although a can of creamed corn would really smart.
1 Reply
1
Reply Tue 7 May, 2019 09:08 am
@chai2,
Crossover episode between Florida Man crazy and NYC crazy.
Florida Man Accused Of Killing Miami Senior With Sword Arrested On The L Train
0 Replies
1
Reply Mon 23 Sep, 2019 04:40 pm
Didn't happen in Florida - but it was by a Floridian

Florida woman bites testicles off camel that sat on her after she broke into its cage at a Louisiana truck stop so she could escape.

A man in Florida has been arrested on suspicion of tampering with electric scooters that were available for hire on the streets of his neighbourhood.

According to Fort Lauderdale police, a surveillance operation was set up over the weekend after more than 140 scooters were vandalised.

Police have not said what the suspect's motive may have been.

When Mr Williams was arrested on Sunday, he was found carrying two pairs of wire cutters and wearing one glove.

He has been charged with criminal mischief as well as resisting arrest and "loitering or prowling".

"In the early morning hours on 28 September 2019... the defendant was observed walking around the neighbourhood, hiding in the shadows, and utilising the dark alleyways to conceal himself from public view," according to the police arrest report.

It said he placed white stickers over the QR codes used by riders to activate the scooters.

During his interrogation "the defendant failed to dispel officers' alarm as to why he was lurking in the shadows and using the alleyways behind closed business, which are not normal avenues of transport for law-abiding citizens", police said.

Police say they notified the scooter companies of the vandalism and that they "proactively removed the scooters in the vicinity from service to avoid rider injury". It is not known whether any riders were injured due to the vandalism.

Of the scores of scooters found vandalised in Fort Lauderdale since April 2019, officers said a majority of those found were "within a two block-radius" of Mr Williams' home.

21-year-old Deandre Somerville overslept for jury service in a Florida courtroom. A judge later punished him with a 10 day jail sentence.

A judge sentenced Somerville to the jail time, plus one year on probation and 150 hours of community service after he failed to serve on a jury Aug. 21. Somerville was released Sunday and has a hearing scheduled Friday.

Somerville, who works at afterschool programs for the city of West Palm Beach Parks and Recreation Department, received his first ever summons for jury duty over the summer. It was also his first time ever going to the courthouse and sitting in a courtroom. He described it as a little intimidating and a little boring. After a long day of sitting and waiting, Somerville said he was picked to serve as a juror on a civil case and was told to return the following day at 9 a.m.

But he missed his alarm and woke up around 11 or 11:30 a.m. It was almost time to head to his afternoon job so he didn’t bother going to the courthouse or calling the bailiff. He just hoped it would all just work out.

“At work, I was looking on my phone thinking, ‘What’s the worst case scenario that could happen?’ I thought maybe I would get a fine or something like that,” Somerville said in a phone interview.

Deandre Somerville served 10 days in jail, is on probation for a year and has to complete 150 hours of community service as well as write a letter of apology.

Somerville lives with his grandparents and helps care for his grandfather who recently had surgery and has trouble walking. Somerville helps him around the house and takes him to therapy and the grocery store while his grandmother is at work.

He was out playing basketball when his worried grandmother called to say there was a police officer at the door with a court summons.

“My grandfather said, ‘Just go in and be honest,’” said Somerville. “I’ve never had a criminal background, never been arrested, never been in handcuffs. The most I’ve ever gotten was a traffic ticket so I was thinking it wouldn’t be that bad.”

Inside the courtroom, he said Judge John Kastrenakes explained that Somerville’s negligence delayed the court by 45 minutes.

“They handcuffed me in the courtroom after that,” said Somerville, who spent the next 10 days in jail. He said his first jail experience wasn’t scary, but he prayed daily and wrote in a notebook.

When reached by phone Thursday, the judge said he’s not allowed to comment on pending court matters.

Somerville said his public defender will try to lessen his probation sentence, which he called “excessive,” at Friday’s hearing.

“Now I have a record. I almost feel like a criminal now. Now, I have to explain this in every interview,” said Somerville, who said he plans to go to school to become a firefighter.

Someone needs to audit the hell out of this judge. Makes me wonder if he treats white jurors who miss their respective days in entirety with even a 1/4 what he sentenced Somerville.
1 Reply
1
Reply Fri 4 Oct, 2019 08:57 am
@tsarstepan,
tsarstepan wrote:

Frack! I pretty much guessed it that the Somerville was black. Of course, Judge John Kastrenakes is white male.

Someone needs to audit the hell out of this judge. Makes me wonder if he treats white jurors who miss their respective days in entirety with even a 1/4 what he sentenced Somerville.


Did you check? It doesn't mention the race - but I thought the exact same thing - I wonder this poor young man is black.

The ironic thing is I am reading this book right now that is about a black nurse being charged with murder during her work as nurse a baby died - it is pretty much speaking to how black people are looked at differently than white in the courts and pretty much most situations.