0 Replies
1
Reply Mon 7 May, 2012 01:52 pm
@izzythepush,
I think of comic books, not much interest (I read a few, some guy named Archie) at twelve the way I thought of movie magazines at eighteen, something we never bought except when we drove to Palm Springs to stay the weekend at our co-worker/friend's screenwriter father's writing bungalow. Sounds luxe, but no, the tiny swimming pool was empty, the temp was 118 F, but the music was good (Beatles era). Cool at the movie theater, super air conditioned, where you could get date shakes (ugh, hated those) and popcorn and cokes.

Ocotillo was a popular plant there. We never had that much of a horror comics tradition over here,
most of our stuff was comic characters like Hungry Horace,
and the action genre was almost completely taken up by WW2 stories.

Some of the comics, as their name implies,
were offered for their humor; little stories rendered in an effort to make u laff.
There were some science fiction adventure "comics" (in name only),
ofen including Space Travel, and there were Superman comics.
My personal library had a special dept. dedicated to those.

"Horror" comics were not much to my taste.
I have never liked Spiderman, nor his generation.

In the 70's American comics were only held by the odd newsagent, and were few and far between, but there did seem to be a lot of them at seaside resorts. I will always associate American horror comics with childhood holidays on the beach.

In America, holidays are not age-based; even April Fools Day is for everyone.
At Christmas time, everyone gets presents, not just kids.

Even though this was past the golden era of comics,
they were quite gruesome nonetheless.

I never went much for the gruesome. To tell u the truth,
I was not aware of their existence.

Izzy, in English comics, r the characters
all running around unarmed, in a state of helplessness ??

David
3 Replies
1
Reply Mon 7 May, 2012 07:03 pm
@OmSigDAVID,
I had a segment of war comics (most of those were of the WWII or Korean vintage wgen I was reading them (they probably came out in the 50s when I was still under 10.
I recall learning the sounds that a submachine gun like a schmeizer or tommy sounded like A schmeizer went BRRRRRRRRRRrrrrrrrAPPP\
While tommy gun (considerably slower) went BUDA BUDA BUDA BUDA BUDA.

These sounds were printed all over the pages where battlkes were being drawn out.
0 Replies
1
Reply Mon 7 May, 2012 07:08 pm
@OmSigDAVID,
Quote:


"Horror" comics were not much to my taste

Horror comics (especially the EC ones) Id read em at night in bed , sometimes Id do the flashlight nder the cover thing and Id scare the **** outta myself when Id move and a cover would make a strange countermovement and I was certain that the monster that commanded my attention in the comic book had, and I was certain, excerpted itself from the pages and came alive and would soon attack me.

"Horror" comics were not much to my taste

Horror comics (especially the EC ones) Id read em at night in bed, sometimes Id do the flashlight nder the cover thing and Id scare the **** outta myself when Id move and a cover would make a strange countermovement and I was certain that the monster that commanded my attention in the comic book had, and I was certain, excerpted itself from the pages and came alive and would soon attack me.

I hope that your firepower was adequate to the occasion.
Were u satisfied with the extant law of self defense therefrom ??
0 Replies
1
Reply Tue 8 May, 2012 01:25 am
@OmSigDAVID,
OmSigDAVID wrote:

Izzy, in English comics, r the characters
all running around unarmed, in a state of helplessness ?? 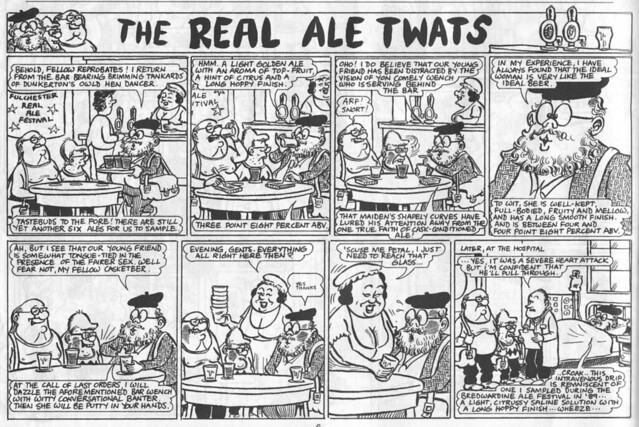 How can anything of 3.8% be considered anything but a soda pop?


Incidently this is a bit ironic coming from an American after all the fuss and bother over lemonade.

The transatlantic row over the alcohol content of Fentimans Victorian lemonade is fizzing away furiously after the state of Maine banned it from sale to those under 21 on the grounds that it is an "imitation liquor".

Trouble began to brew between the Northumberland-based company and the state authorities after a schoolboy in Maine noticed the lemonade contained 0.5% alcohol and showed it to his principal at Houlton high school.

The principal contacted the police, who went to Maine's liquor licensing officials and the state attorney general's office, which ruled that the lemonade could no longer be sold to minors.

The decision has prompted Fentimans – which says the alcohol content is closer to 0.3% and is the result of botanical brewing and a seven-day fermentation process – to post an angry retort on its website.

According to your countrymen, a content of 0.5% is enough to label it hard liquor.

I can't see, that at that strength it would quench your thirst. If you just want to get hammered quickly try absinth, that's got a percentage rate in the high 80s low 90s.
0 Replies
1
Reply Tue 8 May, 2012 05:38 am
@farmerman,
It's a recent thing with us too, but all alcoholic content is measured in percentages now regardless.
1 Reply
1
Reply Tue 8 May, 2012 05:49 am
@izzythepush,
I went to my CFR calculator and got the US regs for "proofing" Its a com;plex distillery test that , in UK was originally made by testing the booze to see whether, if it was poured into gunpowder, the gunpowder would still light if torched. SO the ENglish standard of "Proof" was the comparison to the minimum ABV % that would still torch off the gunpowder. It was found that that value was about 57% which was set as 100% Proof. The ratio of alcohol to "proof" was then the fraction of 57% or 4:7.
In the US , (like all the SOuhern Baptists who wanted Pi to be 3) we set proof as 1:2. (just to **** up you ENglish).

However we only require that "If Proof status of alcoholic beverage is placed upon the labelling or bottle, Said proof should be clearly displayed NEXT to or beneath the Alcohol content by volume"
Thats out of our Codes of Federal Regulations.

I know that, for making moonshine, "proof means to add enough water so that the alcohol "foam bubbles" no l.onger form in the bottle when shaken. That values is more like 75% ABV is equivalent to moonshiner 100 proof , a substantially more powerful drink.
Ive drunk some moonshine once its like drinking what I envision antifreeze would taste like
0 Replies
1
Reply Tue 8 May, 2012 05:51 am
@izzythepush,
OK. I infer that in an effort to suppress their feelings of helplessness,
the absence of Individual dignity, the English have taken refuge in bars
to drown their sorrows in ale? Am I missing anything ??

Beer is very popular in America.
I think that ALL of my relatives have liked it; no exceptions.
I remember drinking it (occasionally) since age 3; I 've never liked it much.
During my childhood in Arizona, ages 8 to 13, I HAD to drink it sometimes
because it was the best available choice for relief from the severe heat,
but I 've never had much taste for beer or ale. I prefer clean water or a soft drink.
I put a lot of nickels into a lot of Coke machines, back then.

If I DO drink, then I usually go with red wine or with brandy.
1 Reply
1
Reply Tue 8 May, 2012 06:00 am
@OmSigDAVID,
That Sam Adams triple Bock is apparently a seasonal beer that is representative of the seasonal tank washout from which a different (Burgudy) yeast was used to really punch up the brew (apparently burgundy yeast ca live in an alcohol content oif up to 18% ABV. SO , even though it appaeras that Sam Adams Triple Bock would be a wine, it is a true Bock Beer ad quite a powerful one as you noted.

Ive never tatsted it as I am abstemious, save for an occasional Hard Cider every month or so.

In US we classify beer with an alcohol content of 0.5% as Non-ALcoholicbeer. Ive tried em and , outside of ST Pauli Girl NA, most of em taste like mostly tasteless fizzy bitter water