Forums: Dyslexia, Community, Dys, a2k Deaths, a2k
Email this Topic • Print this Page
3
Reply Thu 26 May, 2011 10:53 pm
Diane, I know this isn't much of a consolation but he was a wonderful individual: terribly smart, funny, and immensely wise.

IT's unfair that he's gone. If cosmic jesters had their way, he's somewhere haunting a tofu factory or teasing a vegan into trying some veal.

He will be greatly missed. Sending out a few cosmic hugs your way Diane. (((hugs 0 Replies
6
Reply Thu 26 May, 2011 11:21 pm
Several moments ago in an adjoining room, I heard Jane gasp. It was one of those unmistakable bad news sounds. We hugged. We are sad. We'd planned to see Dianne and Bob again at the end of summer.

A couple of weeks ago, Dianne wrote and told us Bob wanted to get in touch with me. We hadn't talked in a long while, my fault, I don't like phones. So I passed on my number here and Dianne called and handed the phone to Bob. We talked for a good while and though he was weak, as he has been for a few years, he was Bob - cynical, positive, dry, warm, bleak, hopeful, challenging, graceful...not to be pinned down in anyway but utterly incapable of not loving others humans who have half a heart and half a brain. I've met and known a lot of people in my lifetime but this guy was extraordinary. We really wanted to spend time with the two of you again, Dianne. When we come down, if you are there and if convenient, we'll spend a few days. I'm so sorry. Our love.
0 Replies
1
Reply Thu 26 May, 2011 11:46 pm
My heartfelt condolences, Diane.
0 Replies
19
Reply Thu 26 May, 2011 11:48 pm
I never really liked Bob anyway. ™

I 've known a lot of people whose human bodies have died
(sometimes, several times), and thay tend to LIKE IT, a lot.

Thay have not regarded returning to human life as a good thing.
Some people have compared it to getting stuffed into a Mayonnaise jar.

Some folks said that returning to human life
was like being put back in jail.

Its not death; its only molting off your meat suit.
Its deciduous, like a butterfly 's cocoon. www.IANDS.org 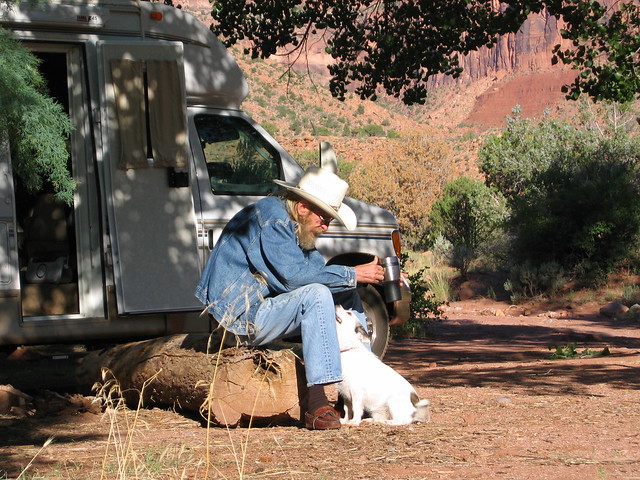 (((((((((((Lady Diane))))))))))) - thinking of you dear Lady x
0 Replies
4
Reply Fri 27 May, 2011 03:39 am
I've just read all these posts, and i hope the affection and regard expressed here by his many friends--so many of whom had met him--will in some measure help you to reconcile yourself to what cannot be changed. May this outporing of love and regret condole you for your loss.
0 Replies
2
Reply Fri 27 May, 2011 05:13 am
@Diane,
Dear Diane - your love for him and his love for you is evident. Tangible. I am looking forward to reading the happy memories.

What a sweet man. There is a spot that will always be his - My thoughts are with you -
0 Replies
2
Reply Fri 27 May, 2011 05:23 am
@Diane,
Sorry for your loss, Diane. May he rest in peace. His memory and youthful mirth lives on in this community as well as many others, I'm sure.

I didn't know Dys well but I often read his many posts with amusement and enjoyment. Bob's words and unique brand of humor and curiosity have been immortalized in this online community. Often his words made me think deeper and laugh louder.

Do Not Go Gentle into that Good Night

Do not go gentle into that good night,
Old age should burn and rave at close of day;
Rage, rage against the dying of the light.

Though wise men at their end know dark is right,
Because their words had forked no lightning they
Do not go gentle into that good night.

Good men, the last wave by, crying how bright
Their frail deeds might have danced in a green bay,
Rage, rage against the dying of the light.

Wild men who caught and sang the sun in flight,
And learn, too late, they grieved it on its way,
Do not go gentle into that good night.

Grave men, near death, who see with blinding sight
Blind eyes could blaze like meteors and be gay,
Rage, rage against the dying of the light.

And you, my father, there on the sad height,
Curse, bless, me now with your fierce tears, I pray.
Do not go gentle into that good night.
Rage, rage against the dying of the light.

0 Replies
3
Reply Fri 27 May, 2011 06:55 am
The first time Jane (Lola) and I met dys and Dianne (and the others like Fbaezer and Roger attending) was here... http://bit.ly/m0f5N1 That was also the first time Dianne and dys had met. Some of that weekend got so bizarre that the four of us never fully recovered and never wanted to.