Forums: News, Osama Bin Laden, Osama, Pakistan, Terrorism
Email this Topic • Print this Page
1
Reply Sun 1 May, 2011 10:18 pm
Strange detail on CNN: apparently the go for attack was given during the royal wedding. Wouldn't it be strange if that useless show of lavish entitlement actually contributed to AQ's gaurs being down?

As the news of bin Laden's death spread, crowds gathered outside the White House in Washington to celebrate.

"The fight against terror goes on, but tonight America has sent an unmistakable message: No matter how long it takes, justice will be done," Bush said in a statement.

According to Al Jazeeera's Rosalind Jordan in Washington, the operation had been in the making for the last 9 or 10 months.

"The fact that it happened inside Pakistan, there have been suggestions that Pakistani intelligence may have been protecting them," she said.

Reporting from Pakistan, Al Jazeera's Kamal Hyder said the development had caught a lot of people by surprise .

"He was considered by many as a hero, but not to the extent that people would come out on the streets. The reaction so far not likely to be strong on the streets, perhaps a protest here or there by the religious parties,." he said.

0 Replies
1
Reply Sun 1 May, 2011 10:28 pm
@failures art,
You got to be kidding me leave an area that one second after we leave would be turn into a base to attack us once more.

Will there be immediate terrorist retaliation

They do not need an excuse to attack us so the next attack will occur whenever they can get it together.
1 Reply
1
Reply Sun 1 May, 2011 10:30 pm
@plainoldme,
Quote:

It will also be interesting to watch the reaction in Congress as the US government admits they've taken unauthorized military action across the border in Pakistan.

Yes I would love to see the GOP crying about killing the sob because we annoy Pakistan who had at least some people in their government who must had been aiding him as he was in the middle of the damn country in a mansion.
0 Replies
1
Reply Sun 1 May, 2011 10:37 pm
I agree with POM, in that I think it's pretty likely thatsomebody is already planning a series of revenge attacks on us because of this. But I also think it was something we had to do regardless.
2 Replies
1
Reply Sun 1 May, 2011 10:39 pm
@MontereyJack,
Quote:

An they would not be planning attacks if we did not kill him?

0 Replies
0
Reply Sun 1 May, 2011 10:44 pm
@MontereyJack,
This was my first (posted) response when I heard the news. (page 1 of this thread)
I'm hoping that the response to the news of Bin Laden's death in the US is, well ... rather more restrained, rather than too celebratory.
That, I fear, could inspire retaliatory responses from his supporters, who could feel the need to demonstrate that the movement continues, despite his death.
For many Islamicists, he is a revered figure.
I'm certain his death will be greeted by intense grief. Let's hope revenge is not part of the response as well.
1 Reply
-1
Reply Sun 1 May, 2011 10:48 pm
@LionTamerX,
LionTamerX wrote:

It was accomplished in Iraq as soon as we removed Saddam; not in Afganistan.

I heard it was not a drone attack. He was shot in the head.

A good place to shoot him; the large bowel 'd be good too.

HALLE-LUJAH!! Three cheers for the US military!! Well done!

Will there be immediate terrorist retaliation

They do not need an excuse to attack us so the next attack will occur whenever they can get it together.

Now that we got him I hope Obama comes clean about how deeply
the Pakistan Military was in on protecting Bin Laden.


Its a touchy diplomatic situation. 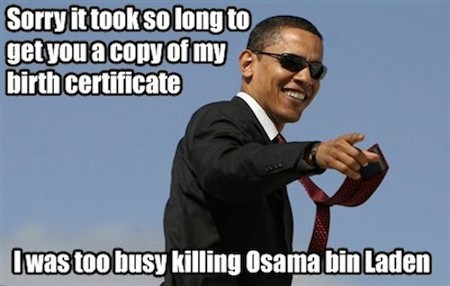