Forums: Politics, U S Politics, American Politics, Us Politics, Trump
Email this Topic • Print this Page
2
Fri 24 Jun, 2016 01:02 pm
When a person like Trump has to have his name pasted on everything, there is something missing in his noggin. Insecurity comes to mind, but I think it's more complex than that. He's the perfect example of a narcissist, and dictionaries should include his name as an example of narcissism.
1 Reply
2
Fri 24 Jun, 2016 02:15 pm
@cicerone imposter,
0 Replies
1
Sat 25 Jun, 2016 05:14 am 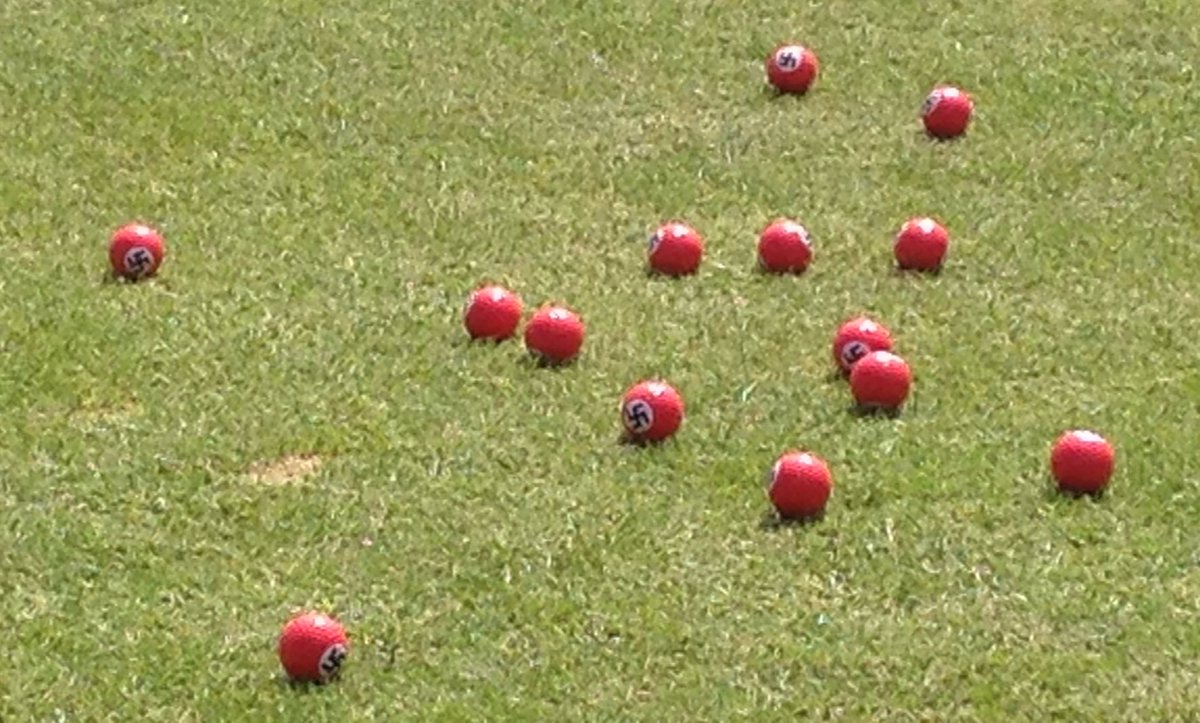 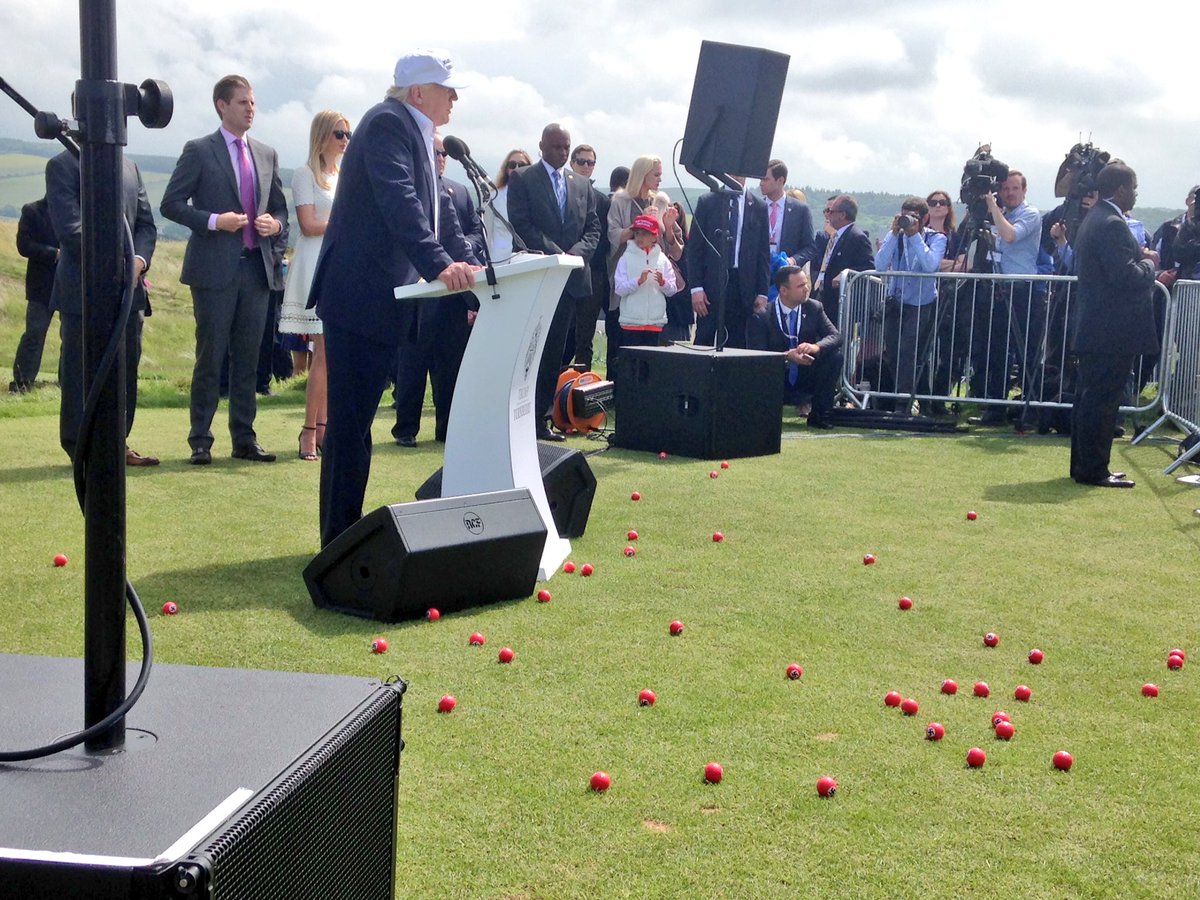 You cannot make this stuff up:

MSNBC’s Wallace Slams Trump’s Response To Brexit: “I'm Gobsmacked” He Discussed His Real Estate Instead Of The Vote

Nicolle Wallace: “This Is The Riddle That Is Donald Trump. Maybe Today He's Not Running For President, He's Selling Suites

CHRIS CUOMO (HOST): Break into Donald Trump's statement right now which is not something we often do but it's very remarkable at this point because of what he hasn't mentioned yet. Donald Trump has been up at the podium for about five minutes, has not mentioned Brexit, is only talking about his golf course and his other business ventures and how it came to be. Let's discuss why he would make this choice and what the implications are.

JOHN AVALON: This is insane. The presumptive Republican nominee has the world watching on a historic day and he is doing a five minute advertorial for his golf course in great detail, talking about the beauty of the suites, how great the pars are on certain holes, not talking about Brexit. This is a summation in some ways of his campaign. He is in the right place at the right time for his message, and he blows it because at the end of the day, it's all about him. He seems to be trying to profit off a presidential run and not taking it seriously. This is trump steaks all over again after winning the primaries. It's completely insane.

ALISYN CAMEROTA (HOST): David, is that how you see it?

DAVID GREGORY: I think John understates the importance of adding suites to the lighthouse. But I totally -- I mean, look, we spent all this time analyzing the potential significance of the parallels with his own campaign. We spent all of this time highlighting parallels of the campaign and way out ahead of where Donald Trump's campaign is. I'm shocked that, even given his statements, that he didn't come out and immediately seize on the importance of this. Maybe he wanted to inject a note of caution by not getting involved. But no, this just seems like political malpractice. I'm as bemused as everyone else looking at this thinking how strange this is 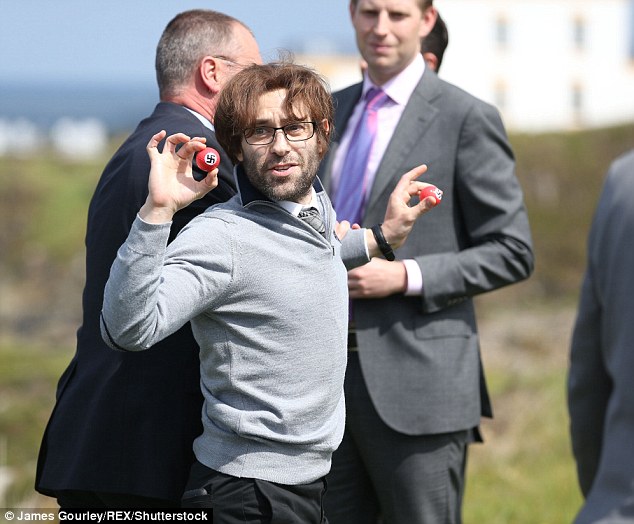 While he was speaking at the ninth hole of his golf course, the billionaire was interrupted by British comedian/prankster Lee Nelson, who held up several swastika-emblazoned golf balls and tried to hand them out to the crowd.

Trump shouted 'Get him out of here!' before security personnel led him away, while Nelson grinned to camera, saying the balls were 'available in the clubhouse as part of a new Trump Turnberry range'.

Nelson, who was wearing a Trump Turnberry sweater, added: 'Sorry Mr Trump. I forgot to hand them out!'


Read more: http://www.dailymail.co.uk/news/article-3657308/Trump-flying-storm-Hundreds-protesters-Donald-Turnberry-reopens.html#ixzz4CVDuL3Hn
Follow us: @MailOnline on Twitter | DailyMail on Facebook
0 Replies
1
Sat 25 Jun, 2016 06:05 am
@Lash,
"@realDonaldTrump You were in that New Jersey section of Scotland, weren't ya, lad?"
Carl... ‏@OliverIsMyBoy 3h3 hours ago

@realDonaldTrump They wanted to remain within the EU you weetabix- haired, ****-clapping, satsuma faced bungle****...

@realDonaldTrump You are a fudge-brained minge-jockey who couldn't understand the instructions on how to open a bag of crisps.

@realDonaldTrump NAW scotland voted to remain. Read news that isn't about yourself for once ya fanny!

@realdonaldtrump Scotland voted to stay. Can you see Russia from your house, too?

@realDonaldTrump You were in that New Jersey section of Scotland, weren't ya, lad? #IgnorantTrump

... One of his most high-profile companies was the first U.S. corporation to be accused of using "pro forma" accounting to exaggerate results and mislead investors.

Trump Hotels & Casino Resorts, a once publicly traded company whose shares dropped more than 90% when the firm sought bankruptcy protection, was charged in 2002 by the Securities and Exchange Commission for reporting financial results in a way that made it appear the company was doing better than Wall Street analysts expected due to "operational improvements," the complaint said. But that was a "false and misleading impression" that initially fooled investors into driving the stock price higher, the SEC said.

The case ushered in a series of changes that govern all publicly traded companies over how they must disclose any adjustments to so-called "pro forma" numbers. Using pro forma figures is a common practice where companies strip out any unusual non-recurring gains or losses, claiming it’s a way to show how the core business is actually doing. Companies that use such results are required to detail all of the adjustments that are made.

The SEC’s action against Trump Hotels centered around an Oct. 25, 1999, news release where the company disclosed its quarterly net income and earnings per share. The release stated that the net income figures left out an $81.4 million one-time charge. However, the SEC said that the release made no mention of the fact that the reported numbers included a one-time gain of $17.2 million resulting from the termination of a restaurant lease with the Trump Taj Mahal Casino Resort in Atlantic City. And by revealing the excluded charge, the SEC said the company intentionally misled investors to believe there were no other adjustments ...

http://www.usatoday.com/story/money/markets/2016/06/24/trumps-company-tricked-investors-heres-how/86058802/
1 Reply
-3
Sat 25 Jun, 2016 07:16 am
@bobsal u1553115,
All companies get away with sugarcoating their bad news each quarter. The bigger they are the more they get away it. Microsoft and Apple's business model relies on annalist to be too frighten to endure their wrath.

Apple spent a gazillion billion on that stupid watch and only sold a few dozen of them-even the Apple worshipers that would stand in line to purchase their toilet leavings didn't buy the stupid thing.

YET APPLE DIDN'T EVEN REPORT A LOSS!!

Microsoft has inflated Xbox sales to the depths of fantasy and never reports a loss on all the rejects that bombed. As their operation systems sales is concerned telling the truth would be corporate blasphemy as we see the Black Box syndrome at it's criminal best.

People let this go because like the entire stock market Apple and Microsoft are overvalued by at least 30%.
2 Replies
5
Sat 25 Jun, 2016 07:35 am
@spooky24,
It seems you don't know the first thing about reading a P&L, spooky.

Apple didn't report a loss the year they released the Apple Watch because the other parts of the business sold lots of other things at a large profit margin. The iphone had a 52% increase in sales the year the watch was introduced.

What Trump did was report the actual earnings which were not good and then put in a disclaimer saying they weren't good because of a one time cost. He failed to report that there was also a one time profit. This made his underlying business look better because investors can subtract the one time cost to get a better sense of how the business is actually doing.
1 Reply
1
Sat 25 Jun, 2016 10:33 am
@spooky24,
Seriously? Trump and Apple in the same echelon? "Spooky"? More "Codswadel".
0 Replies
2
Sat 25 Jun, 2016 02:00 pm
@bobsal u1553115,
Made me laugh. We had a worker from Scotland on my business partner's landscape crew (a separate business from ours). He had a wonderful voice and good humor.
0 Replies
2
Sat 25 Jun, 2016 02:56 pm
@parados,
http://www.ibtimes.com/apple-watch-sales-topped-17b-apple-inc-fy-2015-2162403

While he was speaking at the ninth hole of his golf course, the billionaire was interrupted by British comedian/prankster Lee Nelson, who held up several swastika-emblazoned golf balls and tried to hand them out to the crowd.

Trump shouted 'Get him out of here!' before security personnel led him away, while Nelson grinned to camera, saying the balls were 'available in the clubhouse as part of a new Trump Turnberry range'.

Nelson, who was wearing a Trump Turnberry sweater, added: 'Sorry Mr Trump. I forgot to hand them out!'

he didn't encourage the crowd to beat the crap out of the heckling comedian.

0 Replies
1
Sun 26 Jun, 2016 10:35 am
Robert Reich
25 mins ·
I’m mystified. Even after Trump said he couldn’t get a fair trial from a judge of Mexican descent or from an American-Muslim judge, after he boasted that the Orlando massacre proved him correct on Muslims, even after he blamed Obama for the massacre – he’s trailing Hillary Clinton by just 5 points, according to the latest NBC/WSJ poll, released this morning.
Worse still: When the horserace is expanded to four candidates -- including Libertarian Gary Johnson and the Green Party's Jill Stein – Clinton’s lead drops to just 1 point (she gets support from 39 percent of voters, Trump gets 38 percent, Johnson 10 percent and Stein 6 percent). The polls margin of error is about 3 points, which means if the vote were held today, Donald Trump could be our next president.
Where are Trump's voters coming from? He maintains a significant edge among white voters (49 percent to 37 percent), men (48 percent to 38 percent) and independents (40 percent to 30 percent).
1 Reply
8
Sun 26 Jun, 2016 11:12 am
@edgarblythe,
At the same time the ABC poll has her leading by 12. The Reuters poll has her leading by 10 and the Rasmussen poll has her leading by 5.

When we go to a 4 way race ABC still has her leading by 10, Reuters by 9 and Rasmussen didn't do a 4 way race.

Trump responded in normal Trump mode: "George Will, one of the most overrated political pundits (who lost his way long ago), has left the Republican Party. He's made many bad calls"

When asked about Trump's comment, Will had this comeback:
"He has an advantage on me, because he can say everything he knows about any subject in 140 characters and I can't."
1 Reply