Forums: History, Civil War, Uniforms, Military Uniforms
Email this Topic • Print this Page
Reply Wed 10 Mar, 2010 08:24 pm
We purchased an old farm house built in 1805. An oval portrait has graced the wall of our home since we moved in 15 years ago. I have tried in vain to research this Civil war officer but to no avail. The executor of the estate or any of the remaining family members have been unable to shed any light on this portrait other than to say, it's been in the house as long as they can remember. We are the third family to move into this 200 year old farm house. The prior family took up residence in the 60's. So my belief is that this officer may have had some sort of connection with the original founding family of our home. I have enjoyed many hours researching this portrait. But, have temporarily exhausted my available researchable information. My thoughts on this Civil War Officer continue to side with the confederacy. The light colored uniform, the single 5 pointed stars on the collar, the black planters hat with multiple black ostrich feathers and what appears to be a golden eagle on the front of the hat. Could he have been a Cavalry Officer, a Staff Officer, a Chaplain, or a military cadet? One extra item of interest, I removed the picture from its oval, convex glassed ornately carved antique frame and it appears the picture was hand cut to match the frame. I am unable to ascertain if this portrait was part of a group photo or cut down to fit the oval from an original 16/20 portrait. Any help in identifying this officer would be gratefully appreciated. I would like to create a brass name plate and mount it to the frame if I receive enough info on him.
(Please view attached photo) http://i768.photobucket.com/albums/xx321/VReaction/Close.jpg
Type: Question • Score: 17 • Views: 25,327 • Replies: 148
1
Reply Wed 10 Mar, 2010 08:28 pm
Oh how fun! Setanta should be along any minute now. If he can't figure it out I'll forward it to my brother when he gets back from Iraq.

1 Reply
1
Reply Wed 10 Mar, 2010 10:44 pm
@VReaction,
You don't say where your 1805 farm house is located. Knowing the state and aproximate geographical locale might help in the research.
0 Replies
2
Reply Wed 10 Mar, 2010 10:50 pm
@danon5,
Oh, and in addition, at that time in history the person who was the photographer would and is apparent in this case (as it seems from the photo) hand touch the photo. He, the photographer may have painted the feather effect on the hat and it looks like he really hand painted the uniform - or at least he hand painted over the original. That's obvious. Also, there are no buttons - leading me to think the uniform was painted on the photo by the photographer - that was the normal thing they did in those days.

I know from the old photos I have that the detail is MUCH better than you have shown. Can you show the detail of the hat emblem at closer scale?? And, a clearer shot?? That would be helpful.

First of all, Confederate officers typically had three stars on each side of the collar, not just one (although there was a lot of variation -- officers had their uniforms tailor-made rather than had them issued). And the collar pattern is not typical of Civil War uniforms, north or south: More importantly, this soldier's uniform doesn't show any buttons: it's either a pullover (very unlikely), or else there's a single row of buttons that is hidden. Either way, that would be extremely unusual for an American Civil War uniform of either side. Also, the lack of epaulettes suggests that this isn't a Civil War officer's uniform.

Another thing: you say that the hat has ostrich feathers. I disagree. I think those are rooster or capercaillie tail feathers. Ostrich feathers would be "fluffier." Furthermore, even the flamboyantly attired southern officer wouldn't often sport ostrich feathers (or feathers of any kind) -- JEB Stuart being the most prominent exception to the rule.

What I think you have here is a photo of an Italian Bersagliere. And considering the style of the uniform (single row of hidden buttons, no epaulettes), I am guessing that this is late-nineteenth or early twentieth-century.

1 Reply
1
Reply Wed 10 Mar, 2010 11:30 pm
@VReaction,
In general, the plume suggests a volounteer cavalry regiment which if I squint after poking myself in the eye, I think I can see the two ends of a cord on the front brim.
Does the star on the collar mean a Texas unit ? Most of the collar seems to be the yellow of a cavalry tunic, rather than the blue of infantry or the red of artillery. But the trim on the lapel seems to be a darker colour of red or blue, or even black was worn by some.
The moustache suggests he is a male or an italian/greek woman.
There are no visible chevrons or officer boards to suggest rank.
He doesnt have to be civil war. Grey uniforms were worn by all the states militia. Some northern troops had grey uniforms, and some confederate troops had blue uniforms.
Plumes were also worn by the NY volunteers amongst others....
That badge would be a positive identification if it was clearer.
It is not possible to go by regulations to identify a uniform as during war that fell into disregard and during peace time volunteers were notorious to change if the old uniform was more dandy.
I think he would have rank on for his photo if he had any and his uniform suggests he is not attached to a headqurters. He probably isnt an officer, an he looks too old to be a cadet but he might be training staff at a cadet facility, which might turn out to mean he is in effect wearing the school uniform rather than a military one.

So he might be a texas volunteer cavalryman, rank private, circa before the civil war.
0 Replies
1
Reply Wed 10 Mar, 2010 11:32 pm
Joe, of course, could be right. The similarities with the photograph he has posted are striking.

If it were a uniform of the Civil War era, it would almost certainly be Confederate. The rank insignia--a single star--is that of major in Confederate services. So, for example, the four collar insignia Joe has posted are for Confederate service and are, from left to right and top to bottom, Major, Captain, General officer (no distinction was made between grades of general officer in the insignia) and Colonel.

The hat would not be far-fetched for a militia uniform of the 1850s. The 2nd, 6th and 7th Wisconsin, one Indiana regiment and the 24th Michigan, all regiments of United States Volunteer Infantry, formed the first brigade, first division, first corps of the Army of the Potomac. They were known as the Iron Brigade in their own army, and the Confederates they faced commonly just referred to them as "them black hat fellers." That was because they continued to use the 1855 issue 0f militia uniform, which included a black "slouch" hat. 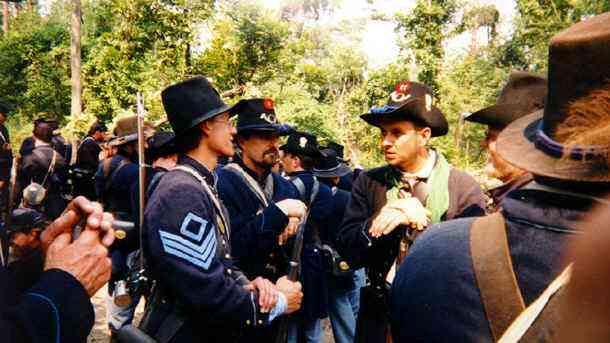 This image is of civil war re-enactors, wearing the uniform of the 2nd Wisconsin Regiment of United States Volunteer Infantry. They wear the 1855 issue militia uniform, with the exception of the hat badges, and that they no longer wear plumes in their hats. Many Confederate units went into service at the beginning of the war in their 1850s era militia uniforms. One South Carolina regiment simply walked up to and overran several batteries of Federal artillery at Bull Run because the gunners assumed they were Federal troops and did not fire on them. One Louisiana regiment at the battle of Shiloh was fired on repeatedly by other Confederate regiments (most had never been in battle before) because they were attired in their 1850s era militia uniforms.

On balance, i find Joe's argument persuasive. The only reservation i have is that i have not been able to find collar or hat insignia of the Bersaglieri such as is shown in that photograph.

I did find this collar insignia:

. . . which is similar. I have found this example of the hat with insignia most commonly: 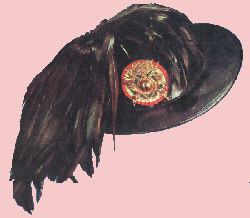 . . . which does not resemble the photograph.

Quite a poser you've come up with for us here.
0 Replies
1
Reply Wed 10 Mar, 2010 11:36 pm
@joefromchicago,
Thats some nice research there Joe.
I dont think it is a Bersagliere soldier as moustaches or not were uniform and the lack of pockets suggests it isnt their tunic. But the hat is a dead ringer for theirs, so maybe he is from an Italian Volunteer Civil War unit ???
1 Reply
0
Reply Wed 10 Mar, 2010 11:44 pm
@VReaction,
By the way, i don't know if you can see it, but it appears to me that the photograph was heavily retouched. This became quite common in the mid-19th century, since, of course, the photographer wanted to sell his product, and therefore wanted to portray his subjects in the best possible light. Taken all in all, i think Joe has the best argument that this is a photograph of a member of a Bersaglieri regiment.
0 Replies
1
Reply Wed 10 Mar, 2010 11:51 pm
I think that he looks like Douglas Fairbanks Jr.
0 Replies
1
Reply Thu 11 Mar, 2010 12:15 am
For those who are interested in identifying the uniforms in Confederate States service . . .

I have mentioned this before, and i find it fascinating, that Robert Lee throughout the war referred to officers in Confederate States service by their authorized rank, but usually referred to Federal officers by their pre-war rank. During the battle of Chancellorsville, an army chaplain acting as a courier rode up to Lee and reported that the Federal troops were advancing on his right from Fredericksburg. Lee told him that he had just sent General McLaws (LaFayette McLaws, a Major General in Confederate service) to call upon Major Sedgwick (John Sedgwick, who was in fact a Major General in Federal service). Lee himself wore the rank insignia of a Colonel, which was the highest rank he had attained before resigning from United States service.

Note Lee's collar insignia--three stars. In Confederate service, that was the insignia of a Colonel, the rank to which Lee was promoted in Federal service before resigning his commission.
0 Replies
0
Reply Thu 11 Mar, 2010 08:11 am
A final note for those attempting to identify American uniforms before the 20th century. Uniforms had what were known as facings. These were colored fabric on the "stand-up collar," the piping on the pants legs, the lining beneath the button and button-hole plackets and the cuffs of the sleeves. Those were:

The Confederates did not slavishly follow that system, although their artillery officers almost always wore the scarlet facings. The first uniform blouse which Joe shows above might have been of a Major of infantry--and then again, it just may have been the taste of the officer who ordered a uniform from his tailor. The Confederate states service treated blue as a general color for infantry, and not necessarily light blue, if they made a distinction at all.
0 Replies