Luv the movie... such earnest human emotions... real too. The lead couldnt be more perfect than Giamatti.

Well filmed, stylish, solid acting but somewhat lacking in substance.
It takes place in Berlin. It involves Lena a young girl who is a small time thief,
she is spotted by Louise, the leader of three attractive vampire ladies, Charlotte,
a former silent movie star and Nora, a young, lively and hip raver girl. Louise falls
for Lena and wants to make her a vampire. Lena has also caught the eye of a young
police officer. Easy to watch, fast paced, but not a great ending.
Worth a watch, not least to see the progress being made in European movie making. 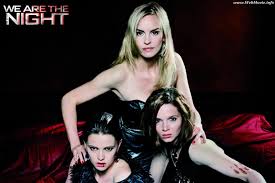 Luv the movie... such earnest human emotions... real too. The lead couldnt be more perfect than Giamatti.

~~
Yesterday, I watched Cary Grant and Audrey Hepburn in Charade. A little too cutesy but still solid crime farce.

Just finished an absolutely brilliant film noir, The Third Man starring Joseph Cotten and Alida Valli.
2 Replies
1
Reply Sun 29 May, 2011 08:37 pm
Just watched Life as We Know it. It's a rom-com about a couple who die in a car crash and then leave their daughter to be raised by their two best friends. The the two friends predictably fall in love while raising the baby girl and live happily ever after. I felt pretty manipulated by the whole thing, but Kathryn Heigl is very attractive, and my wife enjoyed it thoroughly.
0 Replies
2
Reply Sun 29 May, 2011 08:55 pm
We just saw In Bruges - someone recommended it here (I forgot who)... and now I want to visit Bruges. What a picturesque fairy tale town...
well the movie itself was good too with the exception of over using the f-word way too much. Unbelievable that even Ralph Fiennes, that fine English actor - used it excessively.
1 Reply
1
Reply Sun 5 Jun, 2011 07:22 pm
@CalamityJane,
Just saw the Australian crime family film, Animal Kingdom. What a brutal film that was. Solid acting and a great ensemble of actors. A family full of beasts. Watching The Kennedys on ABC1(1) last night took me back to the land of nostalgia. President Kennedy gave an inspiring speech at American University's spring commencement on June 10, 1963. It was less than six weeks after the first global and democratic election of the apex of Baha’i administration. I have been associated with this new world Faith for nearly sixty years. In this speech Kennedy called on the Soviet Union to work with the United States to achieve a nuclear test ban treaty and help reduce the considerable international tensions and the spectre of nuclear war at that time. The Kennedys series did not make mention of this speech, indeed, much of the background in society in the years 1960 to 1963 were not included in this TV docudrama.

But the series did conclude with the assassination of both brothers, JFK and RFK, in 1963 and 1968 respectively. I pondered yet again what North American society and the world has pondered now for nearly half a century. Why the assassinations? Four years ago The New York Times published Alan Brinkley’s review of David Talbot’s book Brothers: The Hidden History of the Kennedy Years.2 Alan Brinkley is a professor of history and at Columbia University.-Ron Price with thanks to 1ABC1, 8:30-10:00 p.m., 12 June 2011; and 2 Alan Brinkley, The New York Times, 20 May 2007.

You1 explored the conspiracy
scenarios, the vast literature,
David…..You told us how you
thought the Kennedys tried to
change the world……...Well, we
thought we were back then, eh?
We were the hippies, the flower-
power, counter culture and there
was a clash with the forces of the
past…..I survived by the skin-of-my-
teeth and all that Kennedy stuff was
a backdrop music-noise to my battles
with life back then. You said, David….
that “history cracked open” on that
22/11/’63 in a world-changing death2
as I was 1/3rd of the way through first
year of my arts degree and 1/5th of the
way into episodes of a bipolar disorder.

I missed entirely that 10 June ’63 speech3
six weeks after the Baha’is won a unique
victory4 because I was a milk-man, a book
salesman or was it a janitor? It was all a
life-time ago, David, and few Downunder
whom I meet now know or care about it.

1 David Talbot’s book and discussed in Alan Brinkley’s review cited above.
2 A quotation from Talbot’s book.
3 ibid.
4 Century of Light, prepared under the supervision of the Universal House of Justice, Baha’i World Centre, 2001, p. 92.

if you enjoyed it, you might want to try and find Kingdom

http://en.wikipedia.org/wiki/Kingdom_(TV_series)
2 Replies
1
Reply Mon 13 Jun, 2011 11:42 am
@djjd62,
For a second, I thought you were referring to Lars Von Trier's ghost story miniseries of the same name, The Kingdom:
http://www.imdb.com/title/tt0108906/
1 Reply
1
Reply Mon 13 Jun, 2011 11:55 am
@djjd62,
my wife really liked "The House of Elliot". Is this one still in production?
2 Replies
2
Reply Mon 13 Jun, 2011 06:17 pm
When I was a kid, a friend and I used to go see movies almost every week, and they were cowboy movies. While at Target last week, I found a collection of cowboy movies, 50 in one box, for $9, so I bought it. I'm still on the first disc which has movies on both sides. So far, they've been Tex Ritter movies. They are corny to a fault, but they are clean of sex and violence with Tex singing about every 10 minutes. In disc 8, it has some John Wayne movies; Blue Steel and Mclintock, but I'm going to watch the movies in sequence. Should keep me busy for about three months.
1 Reply
1
Reply Mon 13 Jun, 2011 07:03 pm
@cicerone imposter,
They are the ones packed in a tin box? We bought one of those. It was the complete collection of Boris Karloff flicks. He made some real dogs.

We re gonna download season 4 of Doc Martin starting tonite. Theres three episodes on one virtual "disc"
1 Reply
1
Reply Mon 13 Jun, 2011 07:07 pm
@farmerman,
I think the metal box ones costs $10, a buck more than what I paid for the Western Classics set.
0 Replies
2
Reply Fri 17 Jun, 2011 06:03 am
Saw The Company Men a couple nights ago. It's a story about a bunch of corporate guys who lose their high-flying lifestyles suddenly, when their CEO drastically downsizes. Ben Affleck, Chris Cooper and Tommy Lee Jones are notable in this almost too realistic movie. It was scary to me. Not that I have ever been, or ever envision myself as being someone with that kind of lifestyle or values. But just the stark, cruel coldness of a world that measures you by what you got and what you ain't got. The line that echoes over and over from that movie is what the supposedly helpful corporate job advisor tells Chris Cooper when he comes to her for counseling on how to apply for new work (he was unceremoniouslycanned after 30 years with the company - one of its first employees)...
"Dye your hair. You're pushing sixty and you look like hell."

A scary movie.
0 Replies
1
Reply Fri 17 Jun, 2011 06:16 am
@tsarstepan,
saw the american version Kingdom Hospital, but not the original, hope to see it some day
0 Replies