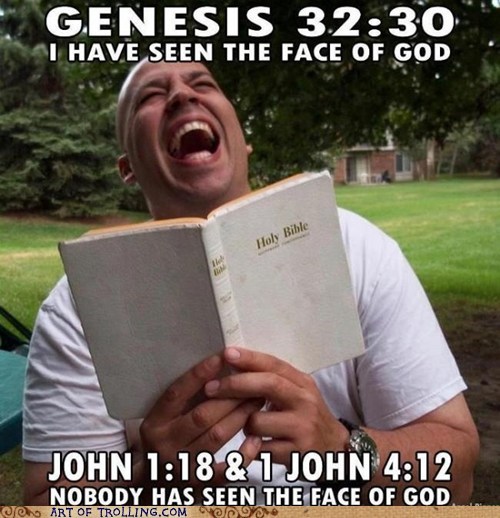 Clearly whoever wrote that has never been to Jaywick.

I knew if I waited long enough, you would post a gem. I'm saving this one. Atheists say the Bible's been edited and tidied up over the centuries to make it look good, then in their next breath they say it's still full of errors, wish they'd make up their minds..

Anyway look at it another way, the fact there are contradictions in it PROVE nobody's edited them out, so we know it's come down to us over the centuries completely untouched as eyewitnesses give us their different accounts from where they were standing and we can therefore trust it implicitly..

1 Reply
1
Reply Sat 6 Feb, 2016 03:38 pm
@Harry Blake,
Good stuff Harry, that's exactly the clarity of thinking that has some religious folk held in such high regard by atheists.

How about I flip your sentence?

CHristians say the bible is the word of God, but now Harry is saying it's contradictory eyewitness accounts which prove it's true.

I wish they'd make up their minds.


Seriously though. Any bible historian (Christian or otherwise) can point out a multitude of 'on the historical record' editions. YOU could find different versions in any book store. Are you really that ignorant, or are you just trolling?

If people witness a traffic accident from different angles, each one sees it in a different way. Same with eyewitness accounts in the Bible as God has interacted with humans over the centuries, so no wonder they differ.
If everything tallied and was the same, we'd know the Bible had been faked and edited to make all the accounts agree..

Of course it is, it's not his fault that humans often couldn't interpret it correctly..