Why are people protesting and rioting in the midst of the Covid-19 crisis?

Forums: News, Politics, Current Events, World Affairs
Email this Topic • Print this Page
2
Sat 13 Jun, 2020 06:53 pm
@jespah,
"She was asking to get shot. How dare she sleep in her own bed at home before the police shot her 8 times!"

To be very clear, this is a sarcastic comment. Her death is incredibly tragic and could have been avoided entirely.

If Floyd did resist arrest then he was foolish. That's the problem with a lot of instances you hear about through the media in which African Americans are wrongfully killed by cops. A majority of the time people have gotten killed because they do not comply with police.

A lot of these people have gotten killed because they want to show their butts to the cops and oppose and/or antagonize the cops some kind of way, instead of humbling themselves and complying with the cops.

That is extremely stupid. The cops are not supposed to shoot unarmed people.

The only instance I can think of in which an African American was wrongfully killed by cops and the person didn't resist arrest was that incident in which a kid was unjustly killed for being in possession of a B.B. gun.

If that had been a White kid he probably wouldn't have gotten killed.

The boy was killed because someone falsely reported to the police that the kid had a real gun, or something along these lines.


This kid should not have been out in a public park, playing with a toy gun, unsupervised. I'm wondering where were the boy's parents when the cops drove up to him and mowed him down with bullets.

It was a White woman who made the false report to the cops about this boy. I think she also told the police he was threatening people with his toy gun if I remember right.
0 Replies
1
Sat 13 Jun, 2020 07:17 pm
@jespah,
jespah wrote:

I strongly suggest you Google the name Breonna Taylor.

No knock warrants have always been an extremely bad idea.
0 Replies
1
Sat 13 Jun, 2020 08:29 pm
@oralloy,
So a majority of the time, there are African Americans who get wrongfully killed by police, the media then puts them in the spotlight, and we, the general public, are supposed to feel bad because these people chose to defy police. The African American community protests, riots and loots over the deaths of troublemakers.

I recall hearing about a young African American man who went into a convience store with the intention of inciting trouble. When the police were called the young man had the nerve to try to take an officer's gun away and threaten the officer's life. The cop killed him in self-defense. The young man was a thug. He was unarmed. I don't think he should have been shot. I think the officer could have maced or pepper sprayed him or tased him a bit as a warning. I think the cop should have proceeded to handcuff the young man afterwards and then taken him to a police station for questioning and had him sit in a locked cell.

The only instance I can think of in which an African American was wrongfully killed by cops and the person didn't resist arrest was that incident in which a kid was unjustly killed for being in possession of a B.B. gun.


I take that back. Trayvon Martin was walking around in public, and George Zimmerman, a cop or a man posing as a cop, spotted Trayvon. Zimmerman was a racist bully who shot Trayvon for no reason. I think he shot him because the young man "looked suspicious".

Trayvon will never draw another breath but that still doesn't satisfy the racists. They make up stories about imaginary tattoos or imaginary gang affiliation ..... but if even those lies were true, where does it say that it's ok to ambush a young man walking back (by himself, no weapons) and shoot him.
1 Reply
-1
Sat 13 Jun, 2020 09:48 pm
@JGoldman10,
JGoldman10 wrote:

Yes. Here are pictures of Mr. Zimmerman's face and the back of his head: 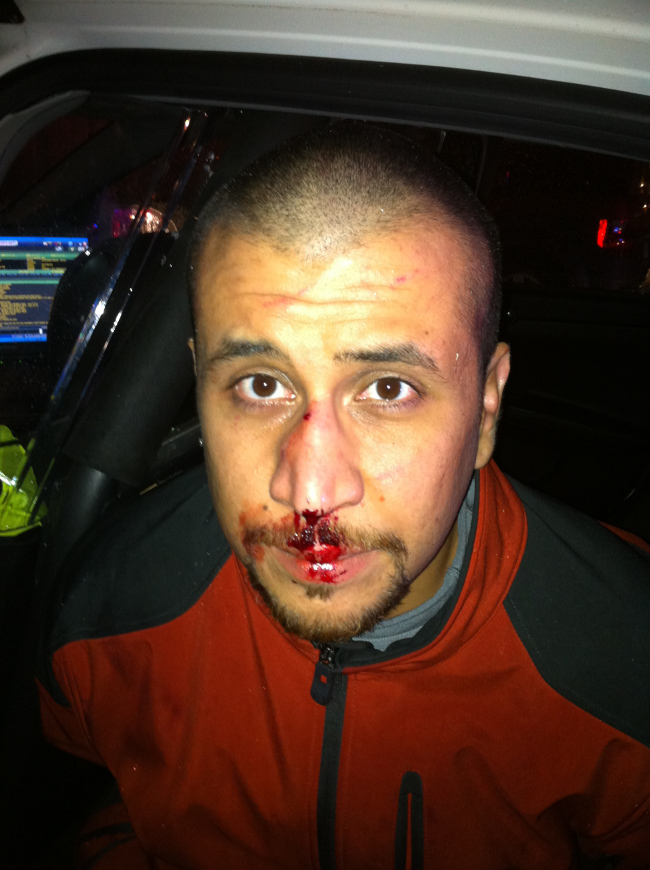 Was Zimmerman a cop?

No. He was the captain of the neighborhood watch.

Zimmerman was creeping up on the much younger boy, the boy noticed and attempted to evade the much heavier man....Zimmerman grabbed him, the boy fought back (I would have done the same) and Zimmerman shot him.

Every word in that sentence is untrue.

Mr. Zimmerman only tried to tail Trayvon at a distance so he could point him out to the police. He never attempted to draw close.

When the dispatcher advised him that tailing him was a bad idea, Mr Zimmerman stopped doing even that.

Then Trayvon came up to Mr. Zimmerman and tried to murder him.

Trayvon will never draw another breath but that still doesn't satisfy the racists.

Falsely accusing people of racism is a crutch because you have no facts or logic to provide.

where does it say that it's ok to ambush a young man walking back (by himself, no weapons) and shoot him.

If OP would not like to do his own research and come to his own conclusion to the events, it's really to his own disadvantage. For you to argue and re-argue point after point does no good for the sake of anything.

Shame on you for your lack of honesty and integrity.
3 Replies
3
Sat 13 Jun, 2020 10:23 pm
@oralloy,
It's not the fact you post un-truths. It's the fact you leave out certain details that make the truth obscure.

Honor and integrity would prevail.
1 Reply
-1
Sat 13 Jun, 2020 10:27 pm
@neptuneblue,
If you feel that there are important details that are being left out, feel free to post them yourself.

I suspect that nothing relevant is being left out of my posts. But if there is something, no one is stopping you from posting it.
1 Reply
3
Sat 13 Jun, 2020 10:27 pm
@oralloy,
And shame on you for such dreadful reading skills....or lack thereof.

I was responding to just that one statement. I defy you or anyone to show that I was writing about your long career here of posting posts.

You are much too sensitive and too prone to leaping to conclusions which are often false.

Did you not think that I might be eagerly awaiting your post when I asked when you'd be starting?
1 Reply