From the moment I started watching the restart of the show 15 years ago, I have been a huge fan of the series.
Doctor Who is a wonderful tv series and a real joy to watch. I truly enjoy watching Doctor Who.

Just a correction of my previous post due to typing error.
The word ago should be in place of the word age
The word age was a typing mistake.

2. Matt Smith (The Doctor) is definitely on my favorites list.

0 Replies
1
Reply Sat 25 Jan, 2020 04:11 am
@Real Music,
And you should be aware that Max isn't motivated by any love for the series but by a mixture of envy, misogyny and Anglophobia.


His association with the show goes back much further.

They were pretty well panned even in England, and ignored by the show runners. They ripped off the name "Doctor Who" and had monsters called "Daleks". But they didn't even get the Daleks right.

I don't consider the movies part of the Doctor Who universe. Most real Doctor Who fans would agree with me on this.

The second cinematic excursion of the Daleks shows little advance on the first... The filming of all this is technically elementary... and the cast, headed by the long-suffering, much ill-used Peter Cushing, seem able, unsurprisingly, to drum up no conviction whatever in anything they are called to do. Grown-ups may enjoy it, but most children have more sense."

1 Reply
1
Reply Sat 25 Jan, 2020 10:15 am
@maxdancona,
What is wrong with you? You don't even know the originals the two films are based on, even though they are freely available.

I was just letting Real Music know about Bernard Cribbins long relationship with The Doctor.

If you knew anything about the relationship between the films and the BBC production you'd know that The Chase featuring the much hyped but short lived mechanoids relied heavily on dalek props from Hammer films. That alone makes them part of the Doctor Who universe.

And as I've said before your opinion isn't important, you're a narrow minded misogynistic Anglophobe who resents our success.

Interesting point about the films is Jon Pertwee's reaction to them. He didn't like them at all but only became aware of them when he'd been the doctor for a few years. He'd never even seen an episode of Doctor Who before auditioning btw. His Saturday afternoons were spent doing matinee performances at the theatre, and there weren't any affordable video recorders at the time so there you go.

When Pertwee's current season ended he was interviewed on the radio and asked if he'd be seeing Doctor Who that night. He was surprised as his season had just ended so he tuned in. It was the first Hammer film and he didn't like it, and for the same reasons a lot of people don't like them.

I remember seeing them as a kid and liking them because it was the only chance we got to see the early stories. My memories of Hartnell are very vague.

Philip Madoc is another Doctor Who regular who appeared in a Hammer film.
1 Reply
1
Reply Sat 25 Jan, 2020 10:37 am
@izzythepush,
Jodie Whittaker is called the Thirteenth Doctor... as in there were 12 Doctors before her. Here is the list as given by the BBC. https://www.bbc.co.uk/newsround/25004050 They include the War Doctor (played by John Hurt) as part of canon although he doesn't get a number. Not surprisingly, Peter Cushing doesn't even get a mention.

A couple of years ago I took my preteen daughter shopping and left her at a comic book store for a few minutes while I went to the store next door. I came back and found her in a heated discussion with the proprietor about whether Matt Smith was the eleventh Doctor or the twelfth.

My daughter pointed out that if he was going to get picky, Matt Smith was the thirteenth because once the Doctor regenerated an extra time because he didn't like how he looked (which was mentioned in one episode).

At this point the proprietor of the comic book store conceded the argument. My daughter is a true Doctor Who nerd.

I think most of us fall in love with our first Doctor. Who you think is the best has something to do with how old you are. For me that was definitely Tom Baker. I showed me daughter some of the episodes. She agrees that K9 is cool, but she insists that Matt Smith is the best Doctor bar none.

1 Reply
1
Reply Sat 25 Jan, 2020 11:21 am
@maxdancona,
All of which is irrelevant. There's also Trevor Martin who played Doctor Who in a stage production, not to mention other actors like David Banks and Richard Hurndall.

You don't get to set the rules, and you're not much of a fan if you won't consider stuff prior to Tom Baker.

You're a dilettante and your knowledge is patchy at best.
0 Replies
1
Reply Sat 25 Jan, 2020 11:38 am
There's also the wider comic base, not necessarily canon but still appreciated by the real fans and, more importantly, drawn on by the scriptwriters.

This one features the mechanoids whose comic career lasted a lot longer than their screen one. 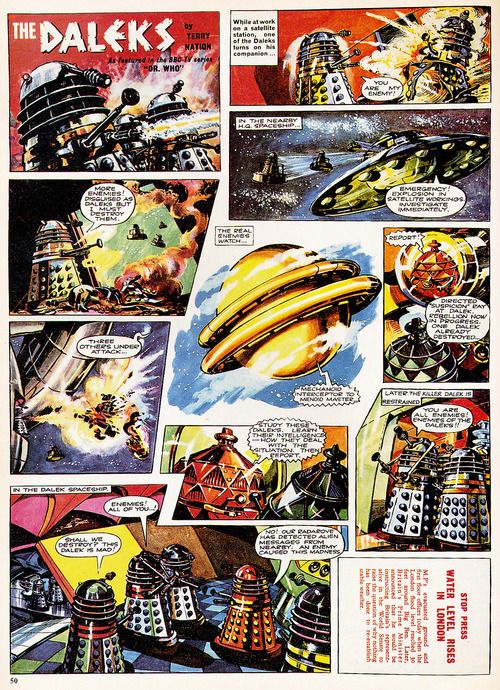 1 Reply
1
Reply Sat 25 Jan, 2020 11:57 am
@izzythepush,
One of us is using the phrase "real Doctor Who fan" ironically and the other is taking this religous war way too seriously.

Truly, anyone is free to enjoy the show how they want (but it is a fact that Tom Baker was the best Doctor).

(I am just playing with Izzy until I get a chance to see and review the next episode.)

If you ask the average person on the street in Britain what Doctor Who looks like, then chances are, the first thing they’ll mention is a long scarf. Even in the U.S., where the show has only really taken on wider popularity in recent years, the closest the Doctor has come to full cultural osmosis is in his appearances in The Simpsons – where he sported the curly hair, toothy visage and, yes, multi-colored scarf of Tom Baker‘s incarnation.

Despite the efforts the the three men before him had put into the role, it was Baker who would come to define it like no other. He embodied elements of all of them—the intelligence of Hartnell, the clownishness of Troughton and even the action stripes of Pertwee—but what he brought to the table, arguably truly completing the character for the first time, was his unique sense of freewheeling lunacy. You could simply never tell what this Doctor would do next, or what was going on behind those mad eyes. More than any other, he gave the sense of not having a clue what was going on, while ultimately remaining completely in control of the situation.

It was during Baker’s tenure that the show reached heights of popularity that even now, it has never quite retained. In the late 1970s, it was at an unassailable peak of quality and critical acclaim, with script editor Robert Holmes overseeing stories that were dazzling in their inventiveness and frequently with a dark, almost horror-orientated—yet also frequently blackly comic—tone to them. But at the center of it all was the Fourth Doctor. Doctor Who could run for another 50 years, and it’s unlikely that this incarnation will ever be supplanted as the most popular and enduring.

“He embodies everything Doctor Who is,” says Dan Williams of PopCulturePreview.com. “Tom Baker was iconic in appearance and his sometimes moody attitude is always fun. He had a childlike sense of wonder that was never repeated until Matt Smith took the role.”

“Nobody has the sheer unpredictable, manic and otherworldly presence of Tom Baker’s Fourth Doctor,” agrees Christopher Bahn of The A.V. Club. “To me, he’ll always be the quintessential Time Lord.” Christian Cawley of Kasterborous.com, meanwhile, remembers childhood viewings: “His face stared at me every Saturday tea time, he made me laugh, he made me cry when he regenerated and he was fortunate enough to have been a part of the show during a creative high.”

Paul Murphy of BBC Three Counties Radio describes The Fourth Doctor as “A moral compass, a sartorial role model, an imparter of terror in the most magnificent way”, while Paddy O’Meara of WhatCulture.com says that “there is a certain magical quality about Tom Baker, particularly to a child!” And Paul Semel labels him “Sherlock Holmes from space”, while to former Doctor Who Appreciation Society co-ordinator Tony Jordan he was “Simply the best. A quite wonderful, eccentric, other world portrayal.”

“He was the Doctor for seven seasons. That doesn’t happen accidentally,” concludes Erika Ensign. “There’s a reason he’s synonymous with Doctor Who for so many people. He’s simply fantastic.”

Link
1 Reply
2
Reply Sun 26 Jan, 2020 04:38 am
@McGentrix,
Working on Doctor Who is hard work. It was that which caused Patrick Troughton and Jon Pertwee to leave. They had both been working pretty much full time and went back to full time work almost straight away.

Tom Baker had some success playing the villain in The Golden Voyage of Sinbad and Rasputin in Nicholas and Alexandria but that was it. Work had dried up and when the offer finally came through he was working as a labourer on a building site.

The reason he did seven seasons was because it was steady work, both Troughton and Pertwee could have done seven seasons if they'd wanted to. It was only Hartnell who was forced out because he was too forgetful and kept missing his cues.

That and the wiping of many of the early tapes lead to Tom Baker being the most well known, but only a crass ignoramus would ignore the contribution of previous doctors.

Your link is to an American source, there are far better ones over here. BBC America! What the **** is that?

1 Reply
2
Reply Sun 26 Jan, 2020 10:52 am
@maxdancona,
One of the Doctor Who staples introduced by Patrick Troughton, along with sonic screwdrivers, time lords and UNIT.

And one of the villains in War Games is a carbon copy of The Master.

It is a matter of person preference though, so Izzy is free to have his own opinion.

2. The episode is titled "Fugitive of the Judoon"

3. I loved this episode.

4. This was an excellent episode.

6. I can't wait to see where these story lines are going.

8. This current cast, the current showrunner, and Jodi Whittaker may just turn out to be pretty good.

9. Maybe the writer/showrunner is making some huge changes. I don't know.

10. I will withhold my final judgment until I've seen the entire season.