Forums: Tv, Doctor Who
Email this Topic • Print this Page
1
Reply Sun 8 Mar, 2020 09:42 am
@maxdancona,
Just because I don't agree with the conclusions of certain groups doesn't mean I'm on your side, especially as you don't seem to understand the motivation behind the sketch.

You remind me of the sort of people Harry Enfield was talking about when he dropped his Loadsamoney character. He was a rich, crude plasterer who flaunted his wealth, there were quite a few of them back in the 80s. Even though Loadsamoney was an attack on people like that they saw it as a badge of honour.
1 Reply
0
Reply Sun 8 Mar, 2020 09:58 am
@izzythepush,
You and I seem to have overlapping tastes in comedy. Larry David is without question poking fun at the excesses of the MeToo movement (and the MeToo movement is none too happy about it).

Monty Python had similar material, like this scene from The Life of Brian. The best comedy is happy poking fun at the hypocrisy of all political sides. It's kind of offensive, but so what. It is comedic brilliance.

1 Reply
1
Reply Sun 8 Mar, 2020 10:58 am
@maxdancona,
You do this all the time, make grandiose claims without any substance. Larry David is poking fun at the sad men who've overreacted to the Me Too movement, not the Me Too movement itself.

If you understood satire you'd know that, but you don't.

Overlapping tastes in comedy? Monty Python and Curb? That's not much of an overlap, it's the one good American comedy and the only British comedy any of you lot have heard of. A grand total of two.

I've seen the life of Brian a few times, and, unlike you, the associated comedy it inspired.

If you understood satire you'd know that, but you don't.

That's great. You are mansplaining away the concerns of many women. As I showed you, many feminist groups feel that Larry David is crossing a line by painting the women making accusations of sexual assault as unreasonable.

By contrasting the evil behavior of people like Weinstein and Donald Trump with the less virulent antics of Larry David, Curb minimizes the horribleness of doing things like grabbing a woman’s shirt or otherwise invading her personal space, which in turn makes the women complaining seem unreasonable. “I was lucky to get out of there,” the caterer later exaggerates to Larry’s assistant, driving home the point that not only were these women mistaken about Jeff’s identity, they must also be out of their minds.

By portraying women as hysterical here, especially in jest, Curb feeds into a popular, false stereotype that prevents women from confronting men who do things like grab their shirts, reach into their plates, and, in the new season’s second episode, hold their wrists so they can’t get away. And it’s not confined to just this one episode.

I am glad you agree with me on this one. You and I are on the same side. The women who are upset with Larry David for portraying the MeToo movement in a negative light; what do they know anyway, right?

1 Reply
1
Reply Sun 8 Mar, 2020 11:18 am
@maxdancona,
Stop being such a tit. I'm arguing with you. I've already said I come to different conclusions. And I'm not going to start arguing with a newspaper article to make you feel better.

I'm not mansplaining anything. I'm explaining satire to you because you have no concept.

I'm not mansplaining anything. I'm explaining satire to you because you have no concept.

You are dismissing the concerns of women who are upset by Larry David's comedy. I don't always agree with women, but at least I listen to what they are saying. You didn't read her concerns before dismissing them.

I see right through you Izzy. And, that's why you get so upset.

1 Reply
0
Reply Mon 9 Mar, 2020 09:58 pm
@izzythepush,
Since you brought up the topic if sanctimonious British gits, I prefer the character of Henry Higgins. My daughter and I saw this on Broadway last year. It was quite enjoyable.


1 Reply
2
Reply Tue 10 Mar, 2020 01:53 am
@maxdancona,
When you post something I've never seen before I'll comment. You're starting to sound like Foofie, like you he thought My Fair Lady, was a gritty fly on the wall documentary about life in contemporary London.

And like you he could only post stuff from the 70s and earlier.
0 Replies
0
Reply Tue 10 Mar, 2020 03:01 pm
The season finale C+7 (number of viewers including overnight plus seven days) was 4.55m. This is the worst viewership since the 1980s. Included on the graph for comparison is season 10 which had the second worst, and yet recovered for the finale. 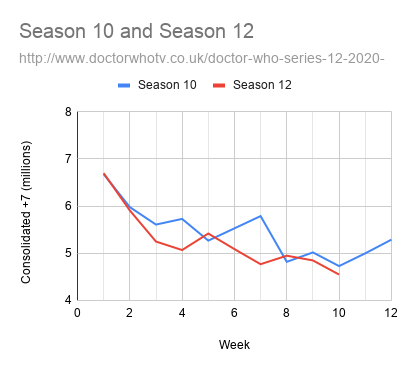 It is not as though millions of Doctor Who fans are misogynists. The first female doctor was received with great enthusiasm, with more than 10m viewers. But they are aren't staying. Over two years, Whittaker as Doctor has lost over half of her viewers. Gimmicks bring viewers, but you need good writing to keep them.

It is official now. Two of the three of the Doctor's companions are leaving. Bradley Walsh (who plays Graham) and Tosin Cole (who plays Ryan) have both announced that they aren't coming back after the Christmas special.