So Hank's on the can reading "Leaves of Grass"....

Where does it go from here?

I'm increasingly alarmed at what a doucebag walter is turning into.

At my early stage of watching, my first big moral question is why walter would choose to go on cooking meth, causing uncountable harm to so many people, when his rich friend offered him a job and/or the money.

Was his pride that important?

discuss.
1 Reply
2
Reply Mon 28 Oct, 2013 10:08 am
@chai2,
There's a great scene in the very last episode where Walt explains his motivation to Skylar. I'll tell you what he says if you really want to know but I think it's worth waiting for.

If you think he's a douche now, just wait. It gets worse. Way worse.

If his rich friends had just offered him a job, without mentioning the cancer, I'm sure he would have taken it. He thought it was offered out of pity so he wouldn't.

There's a great scene in the very last episode where Walt explains his motivation to Skylar. I'll tell you what he says if you really want to know but I think it's worth waiting for.

If you think he's a douche now, just wait. It gets worse. Way worse.

If his rich friends had just offered him a job, without mentioning the cancer, I'm sure he would have taken it. He thought it was offered out of pity so he wouldn't.

His pride plays a huge role in why he does what he does, but it isn't the only reason.


I just finished watching the last episode, and there was no explanation to Skylar that I could see.

She took him to the storage unit where the money was, and all he said was "how much is here" to which she said she had no idea, etc.....later he walks up to her in the kitchen, and simply says to her "I'm out" Did I miss something?

In an earlier episode, he gave her the bullshit reason that it was all for the family, blah blah blah.
Toward the end, he was totally on a power trip with her, just like he was with everyone else.
If things had continued, I could totally see how he could have also started treating his son like this.

Now, in one episode, Jessie had reminded him how at first Walter had figured how much he needed, and it was some figure between 600k and 900k, can't remember exactly. It wasn't a really large number. Jessie pointed out to him how much more he had now, and what was the point? Walter then told Jessie then about Gray Matter, and how he felt he'd sold his share for $5000, and now they were worth billions.
It's like he felt screwed when he sold out early on from his own free will. I think he was carrying it around like they had owed him something, maybe should have brought him back in, etc.
When Elliott had offered to hire him so he could get medical insurance, or give him money for treatment, I think that's when Walter developed this obsession/hatred toward what could have been.

What do I think happens next?

I think Hank doesn't hint to Walter he suspects something, I think he would go all out in his pursuit. If he takes Walter into custody, it better be soon, or Walt would have no problem icing Hank.....and Marie.
When Hank is talking to Walter about the WW initials in the earlier episode, which replays at the end, there's no doubt in my mind that Hank, for an instant, totally takes it seriously that he has suspections about Walt. When he says "WW....what does that stand for....Woodrow Wilson....Willy Wonka..." Then he takes a look at Walt, does a slow blink, with his eyes focusing in...."Walter White?" When Hanks remembering that...he's remembering that instant of looking fully at Walter. He's DEA all the way, he won't balk at questioning Walt.

If Walt kills Hank, the mayhem will continue. He doesn't know how to stop at this point. He's got connections with Lydia, and would find some excuse to keep working with her.
I mean, just look at Gus. He obviously didn't need to be doing this anymore.
It no longer is about the money, and it wasn't for Walter either.

Frankly, I think it was a poor plot direction for Walter to just tell Skylar "I'm out" like as if that was it. Can you imagine all the things that would have to happen to for Walter to get away alive or not in custody from all this? How many people are now depending on Walter as the cook of this desired product? No way would they let him just walk away from that.

When Hank questions Walt, it'll fall apart....all over 2 initials....WW and EG. He might come up with some quick name that matches EG, but it wouldn't hold water.
Then Jessie would go down too.

I wonder what he does with his money? Get back w/ his girlfriend and disappear? Not knowing what's coming down, he'd get caught too.

So what else do you think plays a role besides pride? If anything, I think it's a narcissistic, megalomaniac personality, one that has no empathy. Even him giving Jessie his money at the end was not about doing the right thing, but about making himself feel good.

It's in the last episode of the entire series that he explains to Skylar.


Yeah, the last episode, where Hanks sitting on the john, and reading the inside page where EG wrote a message to Walter. He remember back the conversation about WW he had with Walt, and Walt throws up his hands in a funny way and says "You got me". It was the last episode for the 2012 season. Was there more after that?

I even went back and fast forwarded to every scene that Skylar appeared in, and I didn't see any conversation as to "why" that happened between Skylar and Walt.

There are five seasons (with season 5 being split into two seasons). I think you still have the second half of season 5 to go.

Are you watching on Netflix? The last 8 episodes aren't on there yet.

That's the last episode of the season.

There are five seasons (with season 5 being split into two seasons). I think you still have the second half of season 5 to go.

Are you watching on Netflix? The last 8 episodes aren't on there yet.

You guys are making all this up, right?

I'll tell ya, the only regret I have about my relationship with gus is that I once loaned him my box cutter.

Somebody blew him up. 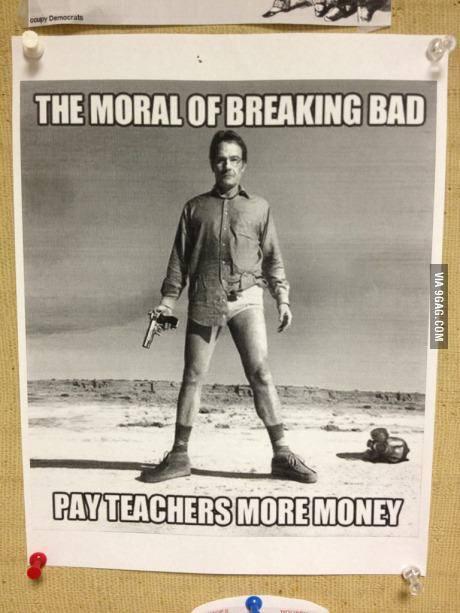