Are "vs. questions" and/or "vs. discussions" allowed here on Able2know?

Forums: able2know, a2k, Forum Help, Site Usage, Community
Email this Topic • Print this Page
1
Reply Tue 23 Jul, 2019 09:21 am
@JGoldman10,
You do display certain behaviours associated with being a closet, but I'm not going to speculate any further it's not my place and I'm not accusing you of anything.

I remember you devoting a lot of time to your desire for Chinese women, which isn't a good idea. The racism in China is quite upsetting, the kid was there for a year and taxi drivers often refused to pick up someone if they were black, and one Chinese student said the Nigerian students he was associating with would murder him.

If you are asexual then your behaviour is also outside the norm, and doesn't really fit in with the go forth and multiply parts of the Bible. It also suggests you have a lower sex drive than normal so really can't appreciate what it's like to have a high sex drive.

Asexual people also suffer from discrimination, so you shouldn't really be pushing for more intolerance.

That's not what asexuality means.


If only our OP could... you know... look in a dictionary sometime.

2a : involving or reproducing by reproductive processes (such as cell division, spore formation, fission (see fission entry 1 sense 2), or budding (see bud entry 2 sense intransitive 3)) that do not involve the union of individuals or gametes
//asexual reproduction

3a : not involving, involved with, or relating to sex : devoid of sexuality
//an asexual relationship

b : not having sexual feelings toward others : not experiencing sexual desire or attraction
//In general, an asexual person does not feel or otherwise experience any sexual attraction, according to The Asexual Visibility & Education Network (AVEN). Basically, it is an inborn absence of sexual desire.

4 : not having or showing a particular sexual identity : neither male nor female
//… parents who first encounter the world of Pokemon through their youngsters may have no idea what this land of soft, rounded, asexual creatures is or what drives it.

Don't ruin comics for me.

And what about how female characters are presented in superhero comics? Don't you think there's a double standard?

You should read this:

That can be a terrible thing. And many people in the comics industry are working on removing this outdated and vile thinking and bringing comics into the 21st century.

I suspect you have a great deal of self-contemplation on your own hatemongerish (tm pending) outdated and vile thinking as well.
1 Reply
1
Reply Tue 23 Jul, 2019 11:32 am
@tsarstepan,
Thank God for Tank Girl.

People provide fanservice when they focus on female character's butts and bosoms, and crotches.

It's based on Robert Walpole, Britain's first prime minister who gave away lots of well paid jobs/sinecures to family members. If Bob's your uncle you're doing very well.

"Bob's your uncle" is a way of saying "you're all set" or "you've got it made." It's a catch phrase dating back to 1887, when British Prime Minister Robert Cecil (a.k.a. Lord Salisbury) decided to appoint a certain Arthur Balfour to the prestigious and sensitive post of Chief Secretary for Ireland.

Are "vs. questions" and/or "vs. discussions" allowed here on Able2know? 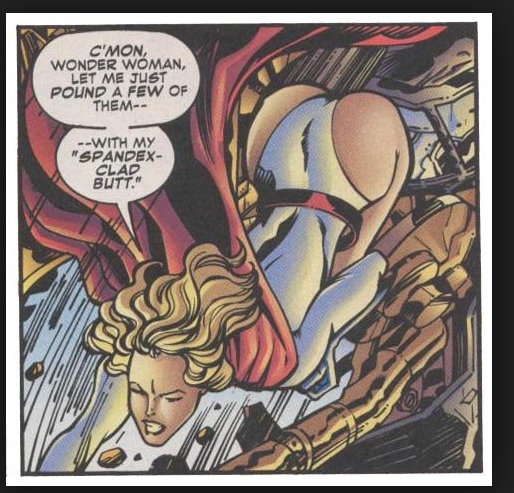 How would you feel if this was a male character in the same position?
1 Reply
1
Reply Wed 24 Jul, 2019 02:10 am
@izzythepush,
I asked God to TAKE MY DRIVE AWAY AND KEEP ME TILL I GET MARRIED. That's what makes me asexual. That's not gay.

I think you missed the point of the post.

You don't think that image is SEXIST?
1 Reply
2
Reply Wed 24 Jul, 2019 05:27 am
@JGoldman10,
You are sinning, you're spreading hate and intolerance. You're doing the exact opposite of what Jesus said you should do.

The image is clearly meant to be sexy, but I don't see it as sexist.
2 Replies
-2
Reply Wed 24 Jul, 2019 06:36 am
@Olivier5,
Again, I think you're missing the point. You can clearly see how Power Girl's butt is spread in that image. If that was a male character with his butt spread like that, no one would complain about it.

You didn't answer the question- if a male character's butt was spread like that would you care?

Let me give you a better illustration:

Now do you see what I mean by a DOUBLE STANDARD?

Why is it more "acceptable" to objectify and sexualize female characters in works of fiction but not males?

Some people complain about how female characters are objectified and sexualized.

I just realized the artist who worked on Tank Girl is the same one for the Gorillaz: 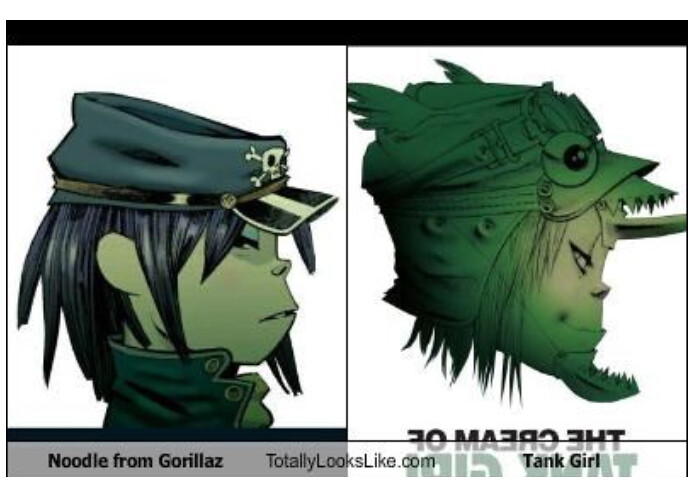 Jamie Hewlett is the cartoonist who's created the art for both:

I knew there was something familiar about the art style for Tank Girl.

I don't know too much about Tank Girl. I know there was a live-action movie which featured Ice-T and there was a comic book adaptation of the movie.

Glad I never watched the movie or read the book.
0 Replies