Forums: Politics, Democrats, Progressives, Corporatism, Socialist Democracy
Email this Topic • Print this Page
Below viewing threshold (view)
-10
Reply Fri 26 Jun, 2020 07:34 pm
@MontereyJack,
Another post where you fail to point out anything untrue in any conservative's posts.
1 Reply
6
Reply Fri 26 Jun, 2020 07:38 pm
@oralloy,
the whole damnedpost is false. It is entirely false in describing me or my attitudes or actions scurrilous baseless characterizations.attitudes or actions, just as yours are every time you characterize progressives or liberals or people who discuss guns. You don't know, and you make baseless malign conjectures out of sheer bigoted hate, and i'm pissed that you consistently post such hate.
1 Reply
Below viewing threshold (view)
-10
Reply Fri 26 Jun, 2020 07:47 pm
@MontereyJack,
I do in fact know.

It is clear from the fact that no one can provide any alternative motivation that progressives are motivated purely by sadism.

he south were traitors and they lost. they were fighting in defense of slavery which is the worst blot on the honor of the US.

So, no support for old traitors while you support the Communists burning our cities and trying to defund the police.
0 Replies
Below viewing threshold (view)
-14
Reply Fri 26 Jun, 2020 07:52 pm
@MontereyJack,
MontereyJack wrote:

the south were traitors and they lost. they were fighting in defense of slavery which is the worst blot on the honor of the US. Those are the facts.

If you honor traitors to your country and pro-slavery defenders you are the hater.

No, the only haters here are progressives. Progressive anti-South bigotry is just as wrong as any other bigotry.

Southerners are just as right to resist progressive hate as African Americans were (and are) right to resist the KKK.
0 Replies
Below viewing threshold (view)
-10
Reply Fri 26 Jun, 2020 07:57 pm
@MontereyJack,
MontereyJack wrote:

faith hill is from mississippi. she knows. you're just bloviating. as always.

What I'm doing is condemning hatred and bigotry, as always.
0 Replies
-1
Reply Sat 27 Jun, 2020 09:03 am
What Jon Stewart really thinks.
Another progressive on Rogan.

Try to keep focused on what is most important to conservative republicans. (Real conservative voters who don't buy into Trump's game, but nonetheless, vote for him.) It is all about the courts in our land and their objective in turning all the courts towards the conservative agenda. So while the SC might rule against punishment for flag burning, (red meat Trump throws out for his base)they nevertheless uphold Trump just for the Judges he appoints. So do many of the political religious leaders.

“Who actually goes out and votes for judges?” said Hawley. “It’s conservative Catholics, conservative Jews, evangelicals, Mormons. That coalition of folks is vitally important to the Republican Party. I think they feel just shocked at what's going on with the Supreme Court, so I think it’s vital that they be heard from and involved in this process.”


And they are smart to focus on the most important role our courts have on our whole way of life by deciding what we can legally do and not do as a society. What I am getting at, for example, Obama promised a lot of hope and change, he managed to pass Obamacare, but then the courts struck down some significant things that were in it. There were others ways Obama was blocked by the court. It is time we democrats as a party get serious about what it means to have a left President and a left wing senate in regards to Judges. And quit sweating the small stuff. If we want a law to take down all signs of the confederacy, we need Judges to uphold it. The same is true on many other issues. So when you go filling in the box for Green, just try to keep that in mind. 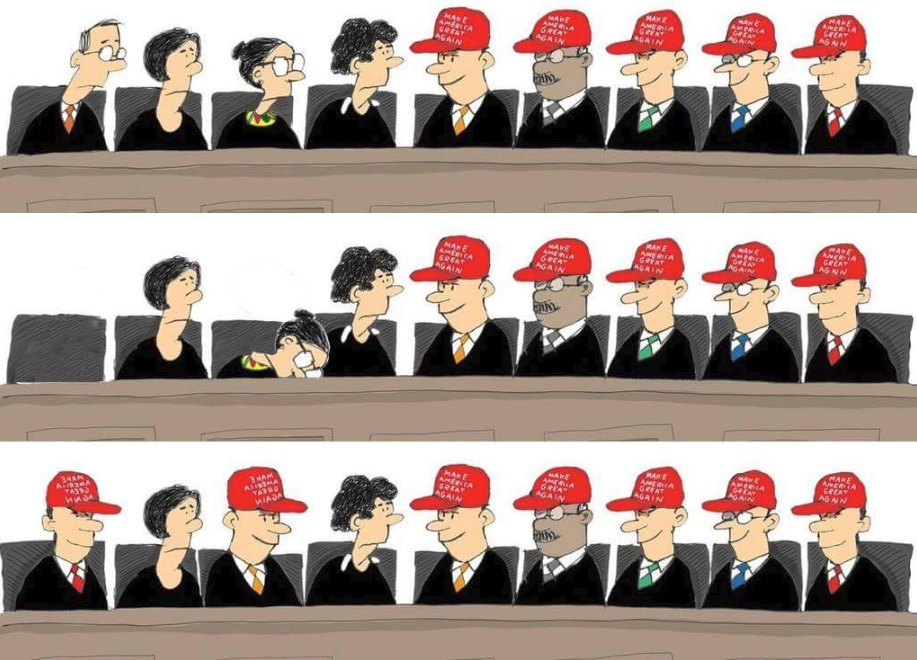 Just sayin..,
0 Replies
4
Reply Sun 28 Jun, 2020 11:36 am
@oralloy,
With any luck at all, she will manage to hold on to her seat until November. She seems a very tough lady. But if she is going to die, she dies, she can't fight death. Roberts don't always go along with Trump, but he does go along with normal conservatives. So he is unpredictable. For the most part, you are right, it is heavily titled extreme far right. We can thank all those who didn't pick Hillary in 2016 for that. At the end of the 2016 primary, there were only two viable choices, Hillary and Trump. They chose to let Trump win, thus we have a far right Trump court. It's that simple. I am hoping people don't make the same choice as 2016, either voting green or not voting or even bizarrely voting Trump which gives Trump the win.
2 Replies
-2
Reply Sun 28 Jun, 2020 11:45 am
@revelette1,
Quote:

Explain how you come to that bullshit exaggeration?
2 Replies
4
Reply Sun 28 Jun, 2020 12:29 pm
@coldjoint,
All of Trump's picks have been picked by the Federalist Society who had spent decades preparing the way for an all conservative court, that is all the courts and the supreme court. Trump and McConnell are proud of that achievement.

Now if you want to be taken at least half seriously, you are going to have to do better than dismissing the WP which is a mainstream new organization. Dismissing it as "fake news" or similar nonsense is not a real debate answer.

Now if you want to be taken at least half seriously, you are going to have to do better than dismissing the WP which is a mainstream new organization.

I dismiss the WP because they lied for over three years and continue to lie. If you want to be taken seriously you need to realize those facts.
1 Reply
5
Reply Sun 28 Jun, 2020 12:37 pm
@coldjoint,
Your reply is why you are so widely dismissed as being worthy to debate with. You did not refute anything in the piece, doubt you even read it. Nor can you refute my statements. Instead you come back with an unfounded accusation. I gave you a chance.
1 Reply
-2
Reply Sun 28 Jun, 2020 01:57 pm
@revelette1,
Quote:

I gave you a chance.

You do not give me anything. You simply do not have that power. The bottom line is Trump can take advice from whoever he wishes.
0 Replies
2
Reply Sun 28 Jun, 2020 04:45 pm
@coldjoint,
Ok. You have just replaced ollie as dumbest poster on a2k.
2 Replies