So, instead of saying this behavior is wrong and stop, you want to see more of it?

No. I'm saying that it is wrong and should be stopped.

But I'm also saying that if it doesn't stop, the Republicans are going to start retaliating by using the same tactics against the Democrats.

And I'm saying that the Republicans will be right to do so.

But my first choice is to force the Democrats to stop this abusive behavior.
2 Replies
6
Reply Wed 11 Jul, 2018 01:10 pm
@oralloy,
Abusive? It didn't seem to be a liberal hollering at that American woman of Puerto Rican background.

If you look, my post was a direct response to what Blickers posted.

I didn't quote Blickers in my post since my post directly followed what I was replying to. Quoting it would have been needlessly repetitive.

Note that I did the same in my reply to your post. Even though I didn't quote you, my post here is still a response to your untrue accusation.
1 Reply
4
Reply Wed 11 Jul, 2018 05:26 pm
@oralloy,
It's not an accusation. It's an observation.

I looked up the word. It means to repetitively say something from out of the blue without relevant stimulus that might have provoked the statement.

I am replying directly to other people's messages. That very much counts as relevant stimulus.
0 Replies
5
Reply Wed 11 Jul, 2018 07:36 pm
Rep. Maxine Waters tears into the Team Trump.
During an appearance on MSNBC's All in with Chris Hayes,
Maxine Waters reads a list of people connected to the Trump team
that also have connections to Russia and the oil and gas industry.

And I'm saying that the Republicans will be right to do so.

No, it's not right. It perpetuates the issue.

And you know that.

Yet, you are still ok with it.

1 Reply
Below viewing threshold (view)
-6
Reply Wed 11 Jul, 2018 11:01 pm
@neptuneblue,
The thing is, if the Republicans do nothing, the Democrats will get away with their abuses and impose tyranny on our country.

If liberals succeed in making it OK to relentlessly follow someone everywhere and never stop hounding them for the rest of their lives, then conservatives are going to use that tactic against liberals.

But conservatives have been hounding people they disagree with for a long time. Now that the liberals have begun to fight back, you turn around and cry "Foul!"

Here's a video of a right wing protestor throwing a bucket of dung on the side of the restaurant. What's worse-asking someone to leave or throwing crap all over the walls? Yet another case of conservatives complaining about liberals while they do much worse themselves.

But conservatives have been hounding people they disagree with for a long time.

These examples are of lone nutcases who don't represent the conservative movement. And they do not follow someone around relentlessly forever. The victims of these incidents do not have to worry about the same thing happening every single time they go out in public.

That is a lot different from Democrats actively organizing with the intention of hounding someone whenever and wherever they go out in public for the rest of their lives.

Now that the liberals have begun to fight back, you turn around and cry "Foul!"

Liberals are not fighting back. They are perpetrating an unprecedented aggression.

They will not like it much when the same tactic is used against them.
1 Reply
7
Reply Thu 12 Jul, 2018 03:55 am
@oralloy,
No, the thing is Donald Trump runs his mouth, from stupid immature insults like "small hands" Rubio, Pocahontos, and Lyin' Ted to telling people he'll pay their legal fees if they assault someone. How is that in any way acceptable to you?

You defend THAT and go after people who really do actually have to defend themselves against his nastiness. I just don''t get why. I just don't.

conservatives have been hounding people they disagree with for a long time.


American conservatives have had organized protests against things like abortion clinics for at least 40 years.

The Democrat routine was 'when they go low, we go high'. That hasn't been helpful for a long long time. The American right has taken advantage of the Democrats unwillingness to get in the mud with them.

Politics in the US used to be dirty on every side - why not go back to those days? As long as no one is physically injured, I'd say go for it (in the US - I still expect better from people in other countries).
2 Replies
-1
Reply Thu 12 Jul, 2018 08:10 am
@ehBeth,
It isn't about throwing mud, it is about winning elections. This idea that the Democrats should throw mud at Republicans misses the mark.

The Republicans are "throwing mud" in a very strategic way. They understand that White middle-class suburbia is where the battle is being fought... and they are telling a narrative that these people (whose votes they want) are under threat from the Democrats.

Maxine Waters is helping the Republicans... her mud is telling White middle-class suburbia that they are under threat from Democrats. Of course, this isn't her intent... she is speaking to her base. Her base is not where the battle is being fought. Her mud throwing is strategically stupid.

If you want to win elections, you have to accept the reality of the battlefield and design a intelligent strategy. You need to accept that reality isn't equal and reality isn't fair. Your opposition has advantages, and you have advantages. You want to use your advantages and minimize the impact of your opponent has where it counts.

For God's sake, Democrats! As good as it feels to throw mud... alienating the very people you need to win elections is an incredibly stupid political strategy.
2 Replies
5
Reply Thu 12 Jul, 2018 09:33 am
@maxdancona,
Quote max:

For God's sake, Democrats! As good as it feels to throw mud... alienating the very people you need to win elections is an incredibly stupid political strategy.

But Democrats aren't the ones throwing the mud. It's the Republicans who are throwing buckets of dung against the walls of restaurants.
2 Replies
-2
Reply Thu 12 Jul, 2018 09:36 am
@Blickers,
Did you read my post Blickers? It isn't about throwing mud... it is about winning elections. The Republicans understand this, and recently they have been winning an awful lot of elections..

These examples are of lone nutcases who don't represent the conservative movement.

I'm sorry, but as been pointed out befor,e several protestors at Trump rallies were beaten up by the crowd while Trump yelled encouragement from the speaking platform. These people weren't just surrounded by people criticizing them-they were physically attacked. And right in front of Trump.

What's worse, being a government figure with power to affect people's lives confronted by a small group of people telling you why they don't like what you did, or being smashed repeatedly by a Trump crowd's fists while Trump looks on?
1 Reply
5
Reply Thu 12 Jul, 2018 09:42 am
@maxdancona,
Quote max:

It isn't about throwing mud... it is about winning elections. The Republicans understand this, and recently they have been winning an awful lot of elections..

Actually, since Trump took office in January 2017 it's been the Democrats winning the special elections, and running an average of 14 points better than in 2016. I haven't made up my mind on this issue yet, but maybe fighting back isn't such a bad idea after all. 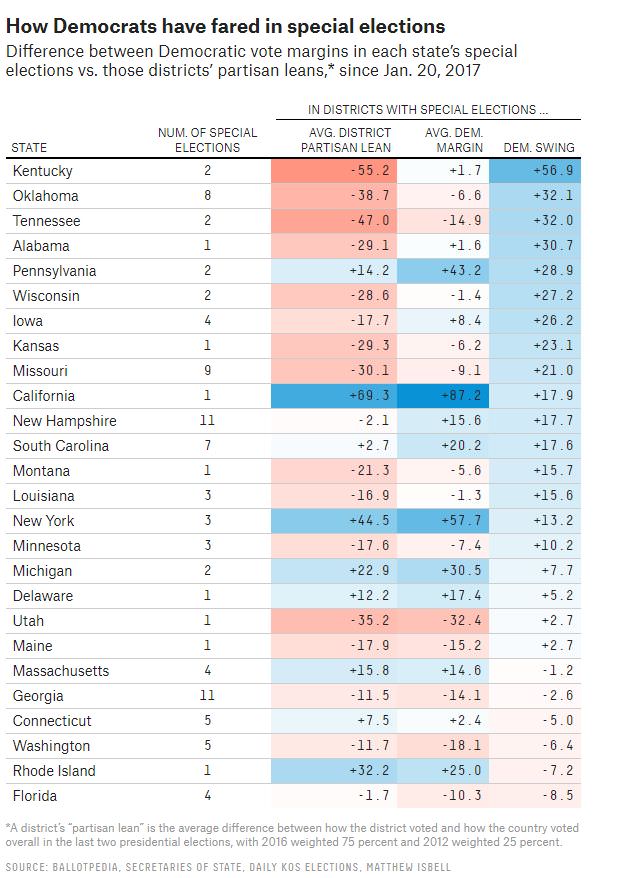 2 Replies
-2
Reply Thu 12 Jul, 2018 09:48 am
@Blickers,
I am saying that there is a difference between "fighting back" strategically, and randomly throwing mud.

I don't think Maxine Waters is doing the Democratic party any good with the core voters in the middle of the electorate. If Democrats fight hard in a way that actually makes progress with key voters... I am all for it.

In my opinion, what Maxine Waters is doing is politically stupid as far as national politics.