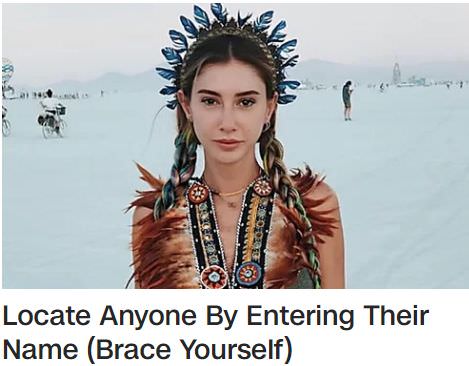 Errrr....Isn't that snow on the ground where she's standing? She appears to be wearing ceremonial Native American feathered ribbons and little else.

If she can stand out in that freezing weather and smile, she should be modeling for Scientific American or Nature about people who are are unaffected by weather extremes.

Doesn't automatically have to be snow because it's white. I see a balloon on the far left, could be desert, or salt flats, or other things.

Also, just because there's snow on the ground doesn't mean it wouldn't be comfortable wearing light clothes while outside.

Particularly if it's a cloudy day, and there's no wind, it'll be quite comfortable outside on a day where there's snow on the ground.

Doesn't automatically have to be snow because it's white. I see a balloon on the far left, could be desert, or salt flats, or other things.

Maybe, but she don't look like any Indian I ever met, and in Farmington, NM, there are lots of chances to meet Indians.

Apparently Turkish. At least that is the language Google Translate listed for the caption. 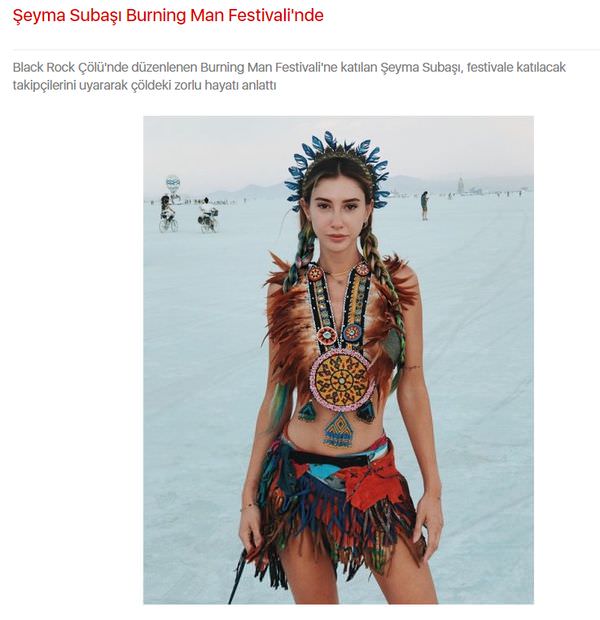 The caption reads: Shayma Subasi, who attended the Burning Man Festival in the Black Rock Desert, told the tough life in the cave by warning the followers to attend the festival.

Oralloy was right. But sand is usually off-white. Even in the original pic, the ground is snow-white. Is it even remotely possible that there was a snowstorm at the Burning Man festival?
2 Replies
1
Reply Mon 11 Jun, 2018 04:39 pm
@Blickers,
Apparently no on the snow question, if this was the 2017 Burning Man festival.

Temperatures in Nevada's Black Rock Desert, where some 70,000 people are gathered for the annual Burning Man Festival, are expected to exceed 100 degrees on Saturday and Sunday.

"A lot more will be burning than just the wooden figure," says Mark Deutschendorf, a meteorologist with the National Weather Service office in Reno. "It'll probably go down as one of the warmest Burning Man events ever because we're expected to hit record highs."

Source
1 Reply
0
Reply Mon 11 Jun, 2018 04:49 pm
@Blickers,
When I first saw the pic, I considered it might be sand, but the color was way too white. This is a pic from the same festival which shows what I consider sand's color. 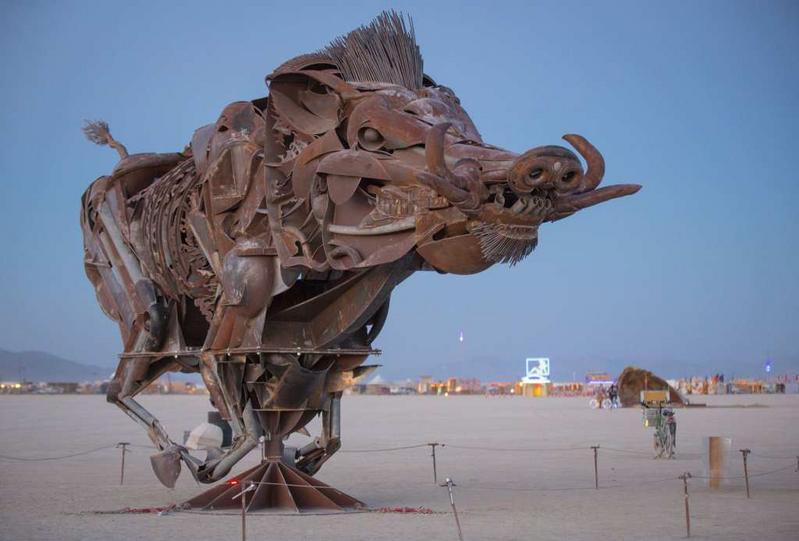 Oralloy was right. But sand is usually off-white. Even in the original pic, the ground is snow-white.


Ever hear of editing?

Seriously dude. This is a young woman dressed up for the Burning Man festival. She doesn't have to be Native American.

A photographer can make the picture any colors s/he wants.

Why is this so apparantly impressive for you that an artist, at an art event, is using the light, filters, post production editing, etc to make the picture appear the way the artist envisioned?
1 Reply
0
Reply Mon 11 Jun, 2018 11:52 pm
@chai2,
Because the editing completely changed the scene for the viewer. I've lived in cold weather places my whole life and most of the time right near the ocean, so I know what both sand and snow look like.

As for it being common to have snow on the ground and have it be warm enough to walk around in beachwear or equivalent, I have to admit that's a new one on me. But the main thing is that it isn't often that you see a photo taken that is edited to completely throw off the viewer-in this case it looks like she's standing outside in freezing weather when in actuality she was in a hot broiling desert at the time. I've seen how taking the picture at sunrise or sunset can bring out unique colors, and I've seen how a building can look entirely different when the pic is taken in the morning from the afternoon. But I can't say I've ever seen a pic edited to make someone standing in 100 degree heat look like she's standing in snow before.

It was interesting enough that I thought I would make a thread and we could kick it around.
1 Reply
0
Reply Tue 12 Jun, 2018 12:54 am
@Blickers,
I didn’t say anything about wearing beachwear in the snow. If you’ve lived where it gets cold in the winter, you know very well that it’s not frigid and windy all the time, and can be quite pleasant often.
It’s unfortunate you couldn’t see the other people in the picture that were wearing warm weather clothes. I can’t help it that the color of the sand completely flummoxed you and made you blind to anything else in the photo.

Photographers change their work all the time. I guess you’ve just been easily fooled.
There’s really nothing to kick around. It’s not startling or even unusual.
1 Reply
1
Reply Fri 15 Jun, 2018 12:31 am
@chai2,
Quote chai2:

I didn’t say anything about wearing beachwear in the snow.

You said the following:

Also, just because there's snow on the ground doesn't mean it wouldn't be comfortable wearing light clothes while outside.

Particularly if it's a cloudy day, and there's no wind, it'll be quite comfortable outside on a day where there's snow on the ground.


Well, since this was in reference to what she was wearing, which was two thin ribbons with feathers on them on the top half of her, we can only assume that's your idea of "light clothes". To me, light clothes is Dockers and short sleeve shirt. What she's wearing is the equivalent of beach wear. And no, I have never come across any situation where there was snow on the ground and she wouldn't be freezing in what she was wearing.

I saw the other people in the picture. The guy on the bike was wearing a jacket of some kind, it didn't look wintry but it could have been a jacket. The fellow in shorts was a problem, he didn't fit in. For what it's worth, I have seen people walking around in shorts in cold weather. Saw it just a few months ago, it was 30 degrees outside and a customer was in a store wearing a heavy sweater and shorts.

But the guy who really comes to mind is this fellow who lived in this upstate New York town I went to college in and lived in for a few years. We called him "Red Shoe Brown Shoe" because of his choice of footwear. As I recall, he also wore different color socks, (which are now in style, at least for women). He was also somewhat ahead of his time as he was an open gay rights advocate, which was pretty unheard of in the seventies in small agricultural college towns. Anyway, he walked around town in shorts all the time, even in the winter. Doubly unusual, as the town was located about 100 miles from Watertown, New York, the second coldest weather station in America next to International Falls, Minnesota. So while the guy wearing shorts in the photo would tend to indicate that it was too warm for snow, by experience I knew that it wasn't a sure thing.

Which still left the problem: Why is this girl dressed in the equivalent of beachwear in the snow? And if it really isn't snow, but sand, why change it to look like snow? They're selling a website in this ad, what's the point of throwing people off?

I can’t help it that the color of the sand completely flummoxed you and made you blind to anything else in the photo.


That's just it, it isn't the color of the sand. It's sand artificially made to be the color of snow. No sand is that color naturally. But why, in an ad for a website?

There’s really nothing to kick around.

There's plenty to kick around. Maybe somebody who has done commercial photography or advertising might want to weigh in on why they did this.

It’s not startling or even unusual.

Maybe where you live, where you say people often walk around wearing beachwear or it's equivalent in the snow, this is not unusual. For everywhere else, this sticks out.

Yeah, I think dockers and a polo are light clothes too. I didn't think I had to run down the list.

What is the reason this picture is occupying so much of your mind?

Here's a different picture for you to wonder about. Maybe it'll break the cycle.

How the hell did they find rabbits this big?

And yes, there are white sand beaches.