Is the US concerned about nerve gas attacks in Great Britain?

A hammer-wielding man has been arrested after an attempted smash and grab of a Magna Carta from its display at Salisbury Cathedral.

Alarms went off when the would-be thief tried to break through the glass box which protects the charter on Thursday.

The suspect was held on suspicion of attempted theft of the document - claimed to be the best preserved of four original Magna Cartas.

It was not damaged and nobody was injured, police said.

The man was wrestled to the ground by staff when he attempted to flee after the attempted raid at 16:45 BST, the Dean of Salisbury said.


The Very Reverend Nick Papadopoulos said: "There were people around so the cry went up, it was pretty thick glass so it hadn't yielded easily despite having a hammer hit it.

"It was a great shock but everyone responded magnificently, both our staff and volunteers and members of the public.

"They raised a cry and he did not get away."

The drama unfolded just before Evensong near to closing time at the visitor centre.

Dean Papadopoulos added: "He had been carrying a hammer so our guys were very courageous.


https://www.bbc.co.uk/news/uk-england-wiltshire-45991475
1 Reply
1
Reply Fri 28 Dec, 2018 07:12 pm
@izzythepush,
Did I mention this before? The UK used to be my most favorite destination after my visit there while I was in the US Air Force stationed in Morocco in the late 1950's. Traveled throughout the country including Scotland and Ireland. The changes in the UK between my first and last visit were dramatic. The improvement in the food was also dramatic. I have since then traveled to over 80 countries. Travel became a passion after my Air Force days. Been to Ushuaia, South Georgia Island, Antarctica, Iceland, Galapagos Islands, South America, most of Europe, many countries in Asia and Africa, the five Stans of the Silk Road - Uzbekistan, Turkmenistan, Tajikistan, Kazakhstan, and Kyrgyzstan and many of the famous rivers of the world including, Nile, Amazon, Elbe, Yangtze, Mississippi, Columbia and Snake (recent), Volga, Ganges, Danube, Mekong, Rhine, Thames, Seine, Saint Lawrence, and Sacramento. I think in Cuba, it was the Tao River. Future travels will be in the US and/or Canada.
2 Replies
1
Reply Sat 29 Dec, 2018 01:30 am
@cicerone imposter,
You mention the Cheshire Cheese pub in Fleet Street a lot, and I doubt many will have missed your predilection for travel.

many of the famous rivers of the world including, Nile, Amazon, Elbe, Yangtze, Mississippi, Columbia and Snake (recent), Volga, Ganges, Danube, Mekong, Rhine, Thames, Seine, Saint Lawrence, and Sacramento. I think in Cuba, it was the Tao River.


What about the Tyne?

Defections from Moscow’s most powerful spy agency are so rare, there are believed to be just two living examples. One is Sergei Skripal, who almost died this year. The other talks
[... ... ...]
The UK is home to a small group of Soviet and Russian defectors. The most prominent, Oleg Gordievsky, did immeasurable damage to Soviet intelligence, spending 11 years inside the KGB as a British double agent. Now 80, Gordievsky lives somewhere in the home counties. Suvorov hints that, since Skripal, his own security has increased.
[... ... ...]
Skripal and Suvorov have never met, and it seems unlikely that they ever will. British intelligence discourages its Moscow assets from fraternising with each other, Suvorov says, a rule that came about following the 2006 murder of Alexander Litvinenko after he met former KGB agents and drank radioactive tea. Suvorov says he was a “good, good friend” of Litvinenko’s, and spoke to him after he was taken to hospital. Initially, he didn’t believe Litvinenko had been poisoned, but during one call, Litvinenko’s voice faltered “like a gramophone”, he says, and the mobile tumbled from his grasp. “Such a nice guy. Suddenly he was killed. A terrible death.”
[...]
Are Moscow’s spy agencies losing their touch? Suvorov says there has been a major falling off since the glory days of the GRU, in the 30s and 40s, when its agents stole US atomic secrets. This decay is part of a general debasement, he thinks, affecting everything in post-communist Russia, from rocket-building to journalism. The country is “slowly crumbing”, he says; those who can are moving abroad.

Putin says he’s making Russia great again. In reality, it’s crumbling
The country has been bolstered by European disunity but that obscures a multitude of ills
Owen Matthews 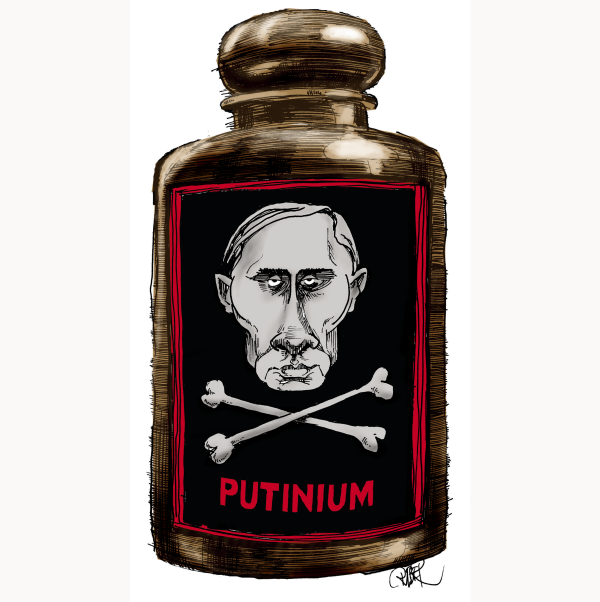 The European Union has put sanctions on senior officials from the Russian military intelligence agency, the GRU, over the Salisbury poisonings.

Four people have been sanctioned - including the head of the GRU, deputy head, and two agents who are believed to have carried out the attack.

The sanctions put a ban on travel to the EU and freezes any assets there.

They also prevent any person or company in the EU from providing any financial support to those affected.

This is the first time the EU has used its new powers to sanction those connected to chemical weapons manufacture and use, which it created in October last year.

All four GRU staff remain in Russia, which will not extradite them to face charges.

In a statement, the EU said:

- Anatoliy Vladimirovich Chepiga and Alexander Mishkin "possessed, transported and then, during the weekend of 4 March 2018, in Salisbury, used a toxic nerve agent" for which the UK has charged them with attempted murder
- Igor Olegovich Kostyukov, head of the GRU, and Vladimir Stepanovich Alexseyev, the deputy head, are both accused, "given his senior leadership role" to be "responsible for the possession, transport and use" of the nerve agent
[...]
The sanctioning of the two agents comes after months of insistence from Moscow that there is no evidence to show their guilt.
[...]
Despite the presence of the two Russian intelligence agents in Salisbury at the time and the use of a nerve agent believed to have been made in Russia, Moscow insisted the men were innocent.

In an interview on state-run television channel RT, the pair said they were merely tourists, denied having travelled under fake names, and said they had made the journey to see the city's cathedral. The appearance was widely ridiculed and the story labelled implausible.

Their identities, at least, are now widely agreed upon: the EU listed the two agent's real names, along with dates and places of birth, in its sanctions list.

Alongside the Russian GRU agents, five people from a Syrian institute widely held responsible for damaging chemical weapons, the Scientific Studies and Research Centre, were also hit with the same sanctions.

Bellingcat previously confirmed that a third GRU officer was present in the UK during the time Sergey and Yulia Skripal fell into a coma, after what the UK authorities said was a deliberate poisoning with Novichok. In addition, Bellingcat established that this same officer traveled multiple times to Bulgaria during 2015, including a trip days before a Bulgarian arms trader and his son were severely poisoned with a yet-unidentified poison.

Following a four-month joint investigation with our investigative partners The Insider (Russia) and Respekt (Czechia), Bellingcat can now reveal the true identity and background of this GRU officer, who operated internationally under the cover persona of Sergey Vyachaeslavovich Fedotov. In fact, this person is Denis Vyacheslavovich Sergeev, a high-ranking GRU officer and a graduate of Russia’s Military Diplomatic Academy.

Additional research in this investigation was also made by newspaper Helsingin Sanomat (Finland).

Notably, we have established that in the last two months, Russian authorities have taken the unusual measure of erasing any public records of the existence of Denis Sergeev, as well as of Anatoly Chepiga and Alexander Mishkin, the main two suspects in the Skripal poisoning. These unprecedented actions cannot plausibly be taken without direct involvement of the Russian state, and add further credibility to the UK government’s assertion that the Skripal poisoning operation, and the subsequent cover-up, were coordinated at a state level. Additional details on these concerted efforts to purge public records of Chepiga, Mishkin, and Sergeev’s identities will be detailed in the next part of our investigation, scheduled to come out next week.

Who is Denis Sergeev?
Denis Vyacheslavovich Sergeev was born in Usharal, a small militarized town in what was at the time Soviet Kazakhstan, near the Soviet-China border. Both Denis Sergeev and his cover identity “Sergey Fedotov” were born on 17 September 1973. He served in the army in the southern Russian city of Novorossiisk in the Krasnodar Region.

We have not established what Denis Sergeev’s service prior to the Academy involved; however, it is known that recruitment into the Academy takes place among military officers with the minimum rank of captain who have excelled at their military service, traditionally in Spetsnaz or navy units. Like all other graduates, Sergeev would have finished the Academy with a minimum rank of lieutenant-colonel. While we have no confirmation of his current military rank, the time served and the nature of his assignments since graduation indicate he currently holds a minimum rank of full colonel, and possibly major-general.

0 Replies
2
Reply Thu 14 Feb, 2019 09:49 pm
In 1978 Bulgarian dissident writer Georgi Markov was poisoned by an injection of ricen delivered by an umbrella 'point' fired into his foot or leg. It happened in London, and it is speculated that the Bulgarian Secret Service has assistance from the KGB..............horrific poisons have always been the Hallmark of Mother Russia.
1 Reply
2
Reply Fri 15 Feb, 2019 11:50 am
@glitterbag,
The parents of the woman who died in the Wiltshire novichok poisonings have broken their silence to express their anger and hurt at losing their daughter in an extraordinary international incident and say they believe there could be more of the nerve agent yet to be found.
An exclusive report in The Guardian:
Novichok victim Dawn Sturgess's parents tell of their anger and hurt
0 Replies