Is the US concerned about nerve gas attacks in Great Britain?

We just have to hope that the shouting match doesn't translate into WWIII. 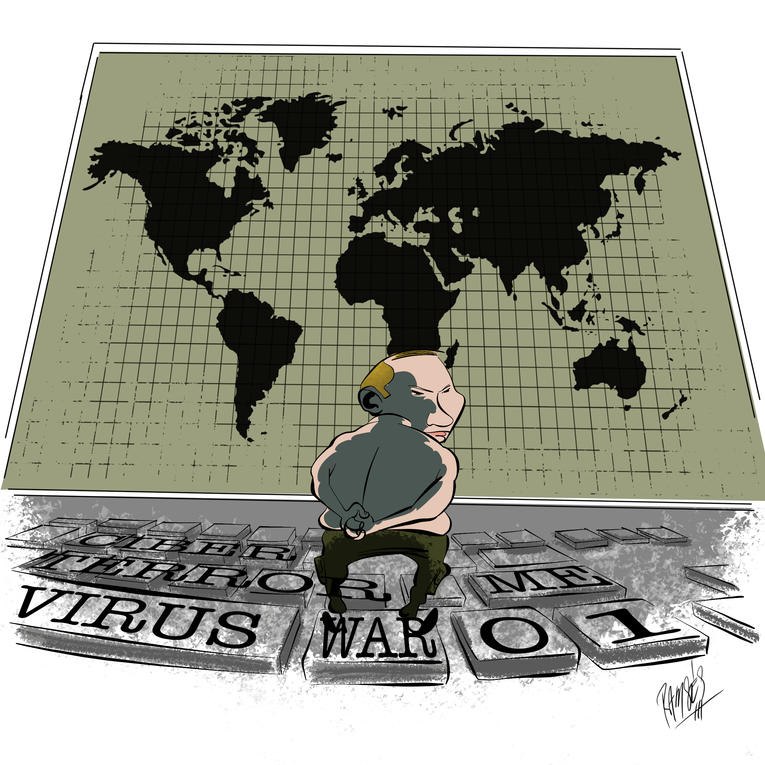 The investigative website Bellingcat has named the second suspect in the Sergei and Yulia Skripal poisoning case as Dr Alexander Yevgenyevich Mishkin.

The website reports Mishkin travelled to Salisbury under the alias Alexander Petrov.

Mishkin, 39, is a trained military doctor in the employ of the GRU, the site reports.

[...]
Alexander Mishkin was born on 13.07.1979 in the village of Loyga, in the Archangelsk District in Northern European Russia. He studied and graduated from one of Russia’s elite Military Medical Academies, and was trained as a military doctor for the Russian naval armed forces.

During his medical studies, Mishkin was recruited by the GRU, and by 2010 had relocated to Moscow, where he received his undercover identity – including a second national ID and travel passport – under the alias Alexander Petrov.

In the period 2011-2018, Alexander Mishkin traveled extensively under his new identity. Bellingcat has identified multiple trips to Ukraine and to the self-declared Transnistrian Republic, the last of which as late as during the Maidan events in Kyiv in December 2013.

Unlike the case of Anatoliy Chepiga, “Petrov”’s cover identity retained most of the biographical characteristics of the authentic Mishkin – such as the exact birth date, first and patronymic name, and first names of his parents.

Until early September 2014, Mishkin’s registered home address in Moscow was Khoroshevskoe Shosse 76B – the address of the headquarters of the GRU. In the autumn of 2014, both Mishkin and Anatoliy Chepiga moved to upscale apartments.

Alexander Mishkin current military rank is unknown. However, based on the known rank as of graduation from the Military Medical Academy (Russian military doctors graduate with a rank of senior lieutenant), and the elapsed time (15 years), it can be posited that as the time of the Skripals’ poisoning incident he was either a Lt. Colonel or a full Colonel.

Bellingcat and the Insider have interviewed multiple sources familiar with Mishkin, both in St. Petersburg and in his native Loyga.

In the full report, which will be published on Tuesday at 13:00, we will publish the full method by which Mishkin was identified, as well as witness testimony from various sources. The full report will also contain forensic evidence of the visual (facial) match between “Alexander Mishkin” and “Alexander Petrov”.
... ... ...

One single bullet can start a world war, you idiot. Sarajevo 1914.

LOL... So which country will it come from, according to your crystal ball?

That'd be your wet dream

They are already a nightmare. And appeasing them only makes them stronger. Thanks Macron.
1 Reply
2
Reply Tue 9 Oct, 2018 01:06 pm
@coldjoint,
coldjoint wrote:

Because president Macron said the Turkish government followed a "pan-Islamic project" and was "anti-democratic"?
Or because the tensions are rising between Iran and France after Macron latest speeches?
Or because of both?

After extensive research, the Bellingcat investigative network has revealed the reportedly true identity of the second suspect in the poisoning of a Russian double agent in the UK. DW spoke to its founder Eliot Higgins.

On Tuesday British citizen journalist Eliot Higgins, of the investigative network Bellingcat, addressed members of the press in London following its announcement that it had conclusively identified the second suspect accused of poisoning the former Russian spy Sergei Skripal and his daughter in Salisbury, England earlier this year. How did they do it? "We use 99.9 per cent publicly available information. And we share with everyone," explained Higgins. His network of researchers used passport information and combed through official as well as leaked Russian databases to conclude that the second suspected attacker is Alexander Mishkin, a military doctor employed by the Russian security services.

DW: Have you cooperated at all with the British intelligence services in this case?

Eliot Higgins: We have not. In the past, we have worked with a Joint Investigation Team, for example in our investigation on the MH17 (the Malaysian Airlines plane that was shot down in 2014 while flying over eastern Ukraine–Editor). That is a one-way process: we share information with them, they don´t give us anything back. But in this case, we have worked completely on our own.

DW: British media has reported that a third person was involved in the Skripal attack. Is that something you have investigated?

Eliot Higgins: I think it can have a very significant effect. We do a lot to train people, we run our own workshops.
We are for example just starting a project in Yemen, where we are training people on the ground to document incidents there, we show them how to use open source investigation techniques. When we see someone using these techniques it's very fulfilling.

DW: You seem to be faster than the actual investigators!

DW: We can expect that the Russian government is going to rebuke your findings. Pro-Russian media like RT have also been critical of you in the past, saying your evidence raises more questions than answers. How can you defend your case in this instance?

Eliot Higgins: The Russian government and RT obviously have an agenda. The Russian government has repeatedly accused us of lying, but when we asked them for evidence of that, they sent us a series of blog posts they copied off the internet. They plagiarize blog posts, rewrite them and present them as their own work. I don´t know if that is incompetence, or if they just want to keep misinformation churning along. But because we use open sources, we can display step-by-step how we have come to our conclusions.

DW: But there are some sources that you can't give away.

Eliot Higgins: This case is unusual, because we had to use our contacts in Russia. Normally, we are using 99.9 percent publicly available information. And in our reports, we share that information with everyone. 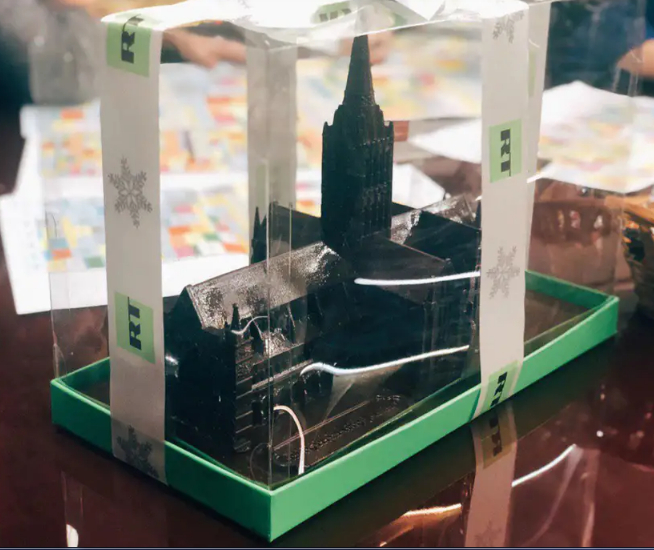 A state-funded Russian television channel has sent out chocolate models of Salisbury Cathedral as a festive gift.

Independent news outlet Dozhd, which has cast doubt on the Kremlin’s shifting narrative on the poisonings, shared a photo showing the detailed model wrapped in an RT-branded ribbon and colour-coded box.

A spokesperson for RT confirmed the photo was genuine and told The Independent that the outlet had sent the chocolate models to “multiple recipients”.

It came days before Christmas celebrations in the Russian Orthodox calendar, while gifts are also given at new year.

Observers branded the apparent joke “sick”, months after a mother died as a result of the novichok attack on Sergei Skripal.

Jo Broom, a councillor in Salisbury, said the community would be “sad and angry” over RT’s stunt.

“They would consider it in very poor taste and rather disrespectful to the people caught up on the attack,” she told The Independent.

“It’s very unfortunate that someone would begin thinking that was amusing. Someone lost their life and some people are still very ill. That makes me very sad that it’s been done and the community would be the same. They will be sad and angry.”

Paula Chertok, a lawyer who analyses pro-Russian propaganda, said seeing a photo of the chocolate cathedral made her “gag”.

After British police announced charges against two GRU agents accused of launching the attempted assassination in March, Vladimir Putin claimed the suspects were “civilians” and called on them to speak to the media.

The following day, RT broadcast a widely ridiculed interview where – still using their cover names – the men claimed they were sports supplement salesmen on a three-day holiday.

“Alexander Petrov” and “Ruslan Boshirov” claimed they returned to Salisbury two days in a row because friends suggested visiting its “internationally famous” cathedral, known “for its 123m spire”.

The Kremlin has denied any involvement in the plot, which Theresa May said must have been approved “at a senior level of the Russian state”.

RT and other Russian state-funded media outlets have aired several conspiracy theories over the poisonings, with British officials hitting out at “contradictory and changing fantasies” used to deny involvement.

One programme saw a former FSB secret service officer call the poisoning of Mr Skripal a “provocation” and in another, a pundit presented it as a plot to “punish Russia”.
... ... ...