Tortilla is not bread.


Tortillas are most definitely bread.

If a Burrito is a sandwhich, so is a sushi roll.

rice in the sushi is not bread, neither is nori.

sushi is not a sandwich, as it contains no bread.

If someone took rice flour, and made bread out of it, and put it around sushi, it would be a sandwich.

Korean bread sold at street markets. It has a unique shape of human feces. It is filled with red bean paste with walnut kernel and sold for about ₩1,000.

This is unrelated... but it made me chuckle. I love Wikipedia. 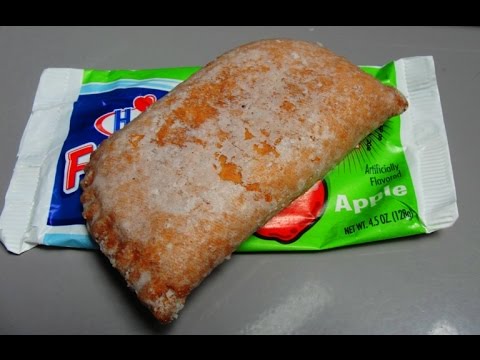 For those who think that wrapped foods (burritos and tacos) are sandwiches. Is a Hostess Pie a sandwich?

What if someone took seaweed flour and put it around sushi?

So, that said, if you took seaweed flour as part of your bread recipe, and made a bread out of it, and put it around sushi, then yes you would have a sandwich.

I've never tried to make bread containing seaweed, but I have made loaves of rye bread. I'm sure the way you wouldn't make a bread out of only seaweed.

Take the american biscuit. We can all agree it's bread. Yet it contains no yeast.
It does contain baking powder, which contains an acid element, and causes bubbles in the biscuit dough. The most basic biscuit contains flour, baking power, a liquid and shortening or butter. Some kind of fat in other words.

The most basic bread is made from flour, water, salt and yeast.

The most basic tortilla is made from flour, water, baking powder and lard. Again, a fat.

Hey! Wait a minute! That recipe for tortillas has the same ingredients as a biscuit! What the....?

But wait. Biscuit are a bread, made with flour, a rising agent, liquid, salt and a fat....and can be made in a skillet or in an oven.

But, tortillas, made with flour, a rising agent, liquid, salt and a fat, and is made in a skillet or some other flat surface...somehow isn't a bread?

If someone is hung up on the "2 pieces of bread" then consider than many times tacos are made with double tortillas.

Or, you can put the filling on one tortilla, put another tortilla on the top, and call it a quesadilla.

2 pieces of bread with filling in between. 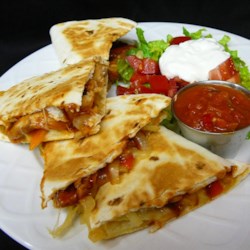 I know for instance that many places will make their "sandwiches" wrapped in lettuce instead for those trying to cut bread out of their diet or perhaps those that have a gluten free diet. 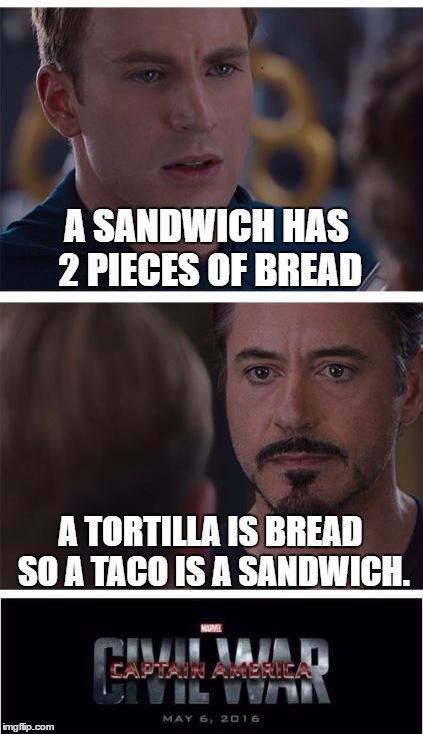 The most basic tortilla is made from flour, water, baking powder and lard. Again, a fat.

Here is where we differ.

A real tortilla is made from corn, water and lime; nothing else. The so-called "flour tortilla" is a fairly recent knockoff of the real thing. A real tortilla has no fat. It is not bread. A taco is not a sandwich. QED.

Here is another example of food being wrapped in not bread (also not a sandwich). Do you agree that fresh Spring rolls wrapped in rice paper are not sandwiches (although they are yummy). 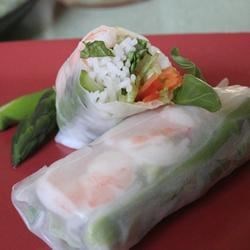 THESE ARE NOT SANDWICHES.


2 Replies
1
Reply Fri 17 Mar, 2017 02:02 pm
@maxdancona,
Next thing you'll do is tell us you can't make and have a matzo sandwich.
0 Replies
1
Reply Fri 17 Mar, 2017 02:53 pm
@maxdancona,
I agree with Max (for a refreshing change). I chased down flour tortilla recipes once, now a bunch of years ago and I somewhat remember the province (or whatever you call the region) of Sonora used flour and maybe was known for that; how often, and by what proportion of the population, I've no idea.

Meantime, I still have a sack of masa harina waiting for me to make tamales again. Tamals, or tamales, are not sammiches. I found tamale making something of an effort and mine weren't wonderful. (I missed the party where latina friends went to work making them for Christmas time, big mistake by me). I know you can make lots of other stuff with masa, but time goes by and I don't do it. I haven't found Albuquerque area tamales to be worth eating (I remember one pretty good one, once, and only once, but I've probably not been to the right small family run restaurants.
1 Reply
2
Reply Fri 17 Mar, 2017 03:05 pm
@ossobucotemp,
My favorite Seinfeld sandwich episode when George has a man crush.

He made sandwiches for Tony.

I can relate anything human situation to a Seinfeld episode.

Please turn the lights off if you are the last one to leave.


What about an open faced sandwich? Is that not a sandwich?

Please turn the lights off if you are the last one to leave.


A sandwich doesn't require 2 pieces of bread. I've eaten plenty of sandwiches which I made with 1 piece. What about an "open faced sandwich"

Tortillas are a type of bread. A sandwich is filling inside of a piece or more of bread.


Oops chai beat me as usual

Are pita or rollups considered sandwiches?

Are submarines or hoggies considered sandwiches?
Just wondering where we draw the line
0 Replies