Views of the US election from non-US folk

David Niven, in "The Moon's a Balloon" (a wonderful and sadly forgotten book) recounts the hilarious tale of that sunny California afternoon when the Munchkins climbed up onto the marquee of the WB studio, then got roaring drunk and naked.
0 Replies
1
Reply Fri 12 Nov, 2004 06:39 am
N-n-n-n-n-n-n-n-n-naked Munchkins??????

Seeing Stars: The Hotels of the Stars..


When the 1939 classic "The Wizard of Oz" was being filmed at M-G-M Studios, one hundred and twenty four midgets (who played the "Munchkins" in the film) converged on Culver City, and most of them stayed at the old Culver City Hotel, just a few blocks away from the famous studio. At the time, the six-story hotel was the city's only "skyscraper."
The reputed stories of the Munchkins' supposedly drunken shenanigans are legendary, and helped inspire the 1981 movie comedy "Under the Rainbow" (starring Chevy Chase and Carrie Fisher). The producers used the actual hotel as a shooting site for that fictionalized version of the making-of-Oz story.


According to some of the not-so-tall tales, many of the 124 adult midgets got drunk, sang choruses of "Ding Dong, The Bitch Is Dead," and almost wrecked the hotel. Despite a promise of high wages once filming of "The Wizard of Oz" was completed, rumors spread that the tiny cast members might not be paid at all. So, when M-G-M suddenly announced that the Singer Midgets would also play the roles of the Wicked Witch's "flying monkeys," many of the little people concluded that they were being duped and went on strike against the studio. Among other alleged Munchkin antics in Culver City: a female midget propositioned a stagehand, a male little person bit an M-G-M policeman on the leg, and another one supposedly fell into a toilet at M-G-M and had to be rescued.

But those tales of drunken debauchery (spread in large part by an adult Judy Garland - who had a drinking problem of her own) are strongly refuted by some modern-day "Oz" experts and the surviving Munchkins themselves, who insist that although the little people had a few parties, the stories are greatly exaggerated. They say they worked 14-hour days and had little time for mischief.

(Incidentally, the actor who played the Munchkin leader of the "Lollipop Guild," later appeared as "Buster Brown," for the shoe company of the same name, and as "Little Oscar "- for the hot dog company, Oscar Meyer). 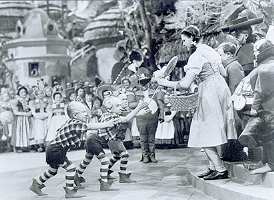 Once more into the Breech !!!!

Perhaps the exceptionalism you see is not so much a sense of real superiority, as it is a sense of pride in the continuous creation of something new, that emerges both from the historical circumstances of our revolution and the assimilation over a very long period of time of waves of immigrants (legal and otherwise) from all over the world.

The United States has generally been reviled by the ruling classes in most European countries - except when they are confronted with real danger from another external or internal source. We have generally held a certain appeal at other levels in their societies - those that once were the continuing source of our immigrants. Americans are very often the descendents of Europeans who abandoned Europe in an effort to find an alternative to it. Europeans are the children of those who didn't make that choice.

On their journeys across the Atlantic those with a sense of adventure and an aquisitive, creative bent veered to the left and came to the States. The others went to Canada.

You should have asked me sooner !!.

I did ask you sooner. The cupboard yet remains Hubbardian.

But by all means, don the red nose, the fluffy collar and the size 29 shoes and then wiggle back into that breech. To the delight of all, we'll loudly fire you off at a trajectory some eight degrees above the north bleachers. The tent-canvas is thickest there, but you've got a hard head, and I see nothing to slow you down until you pass the sacred 49th and the Missile Defence lazer tattoes a maple leaf on your substantial bottom.
0 Replies
1
Reply Fri 12 Nov, 2004 07:00 am
deb

Culver City Hotel it was then. Thanks.

Recommendation: if you can buy Niven's book online, it will have you rolling on the floor. Extraordinary stories.
0 Replies
1
Reply Fri 12 Nov, 2004 08:48 am
If we may for a moment return to the topic: in conversations over the last week with my fellow extreme-right-wing folks in Berlin, Paris, Montreal, and elsewhere, I found them overjoyed at the re-election of President Bush, not so much for reasons of ideology as of practicality:

"If Kerry had been elected", they all said, "he'd be sure to come around and pester us to send troops to that giant sinkhole you've created in Iraq. To Bush we've already said "no" and suffered the consequent flak - he's not coming back on that one again."

Sound thinking, it seems to me, but hardly reflected in their countries' media coverage.
0 Replies
1
Reply Fri 12 Nov, 2004 09:04 am
You know extreme right-wing folks from Berlin who can articulate a consistent thought? Obviously you cannot be talking about Berlin, Germany ....
0 Replies
1
Reply Fri 12 Nov, 2004 09:07 am
Gewiss, Herr Thomas, Berlin, Deutschland.

We don't appear to be moving in the same circles <G>

Probably not. You must have visited their re-education camps -- the ones where they show them a copy of the constitution or the Sueddeutsche Zeitung just before giving them an electrical shock. And you must have visited them before they'd been conditioned to cease and desist from thinking. Not pretty, that.
0 Replies
1
Reply Fri 12 Nov, 2004 09:37 am
You're stuck in nostalgia for the late unlamented DDR, Thomas - they're the last ones to have had such camps, even though they, too, drew the line when the Bulgarian secret service in (then) East Berlin asked for assistance in removal of a body of someone who had died in their embassy while "assisting them with their inquiries".

As to the Sueddeutsche - had occasion to meet several times with the late Franz-Josef Strauss, and share his opinion it is a center-left rag. Alles klar?!
0 Replies
1
Reply Fri 12 Nov, 2004 10:59 am
I see. You mean the hunting buddy of the unlamented DDR's Erich Honecker and Alexander Schalck-Golodkowski, right?

0 Replies
1
Reply Fri 12 Nov, 2004 11:10 am
Ole Alexander - hadn't heard him mentioned in some time, not since he sold the gold reserves of the DDR for Ostmark. I liked Franz-Josef, a fellow pilot and Wildschweine hunter, and if he chose to fly his plane to Moscow that was his business, not mine.

As to Honecker - I remember him trying to stop Russians from destroying German forests while deploying their medium-range nukes and hold that to his credit. For all else, de mortuis etc.

0 Replies
1
Reply Fri 12 Nov, 2004 02:04 pm
Well, I'm very pleased you two have met.
0 Replies
1
Reply Fri 12 Nov, 2004 03:02 pm
Blatham - so far this encounter brings to mind the lady seated at the captain's table during a transatlantic voyage who was addressed familiarly by a young man at the same table and had to tell him she didn't believe they had been introduced, to which the young man stammered "Bbbut, surely you remember me, we slept together on the voyage over" and was definitely shut up with the retort "And what makes you think that constitutes an introduction?"

To the point: who the hell is Thomas? Why the hell are you pleased we ran into each other online? Any info you can provide appreciated <G>
0 Replies
1
Reply Fri 12 Nov, 2004 04:08 pm
Thomas is the classic Evil German. Of course, there's little remarkable in this achievement, as all Germans are evil. Recently, walking around the reservoir in Central Park, he did a very capable imitation of Olivier in Marathon Man and shoved me in. Fortunately, my cranium provides excellent floatation and I survived. I don't hold this against him. At some point, we have to begin forgiving Germans their inherent evilness. But not Republicans.
0 Replies
1
Reply Fri 12 Nov, 2004 04:42 pm
Grrrrrrrrrrrrrrr®