Type: Discussion • Score: 6 • Views: 4,068 • Replies: 40
3
Reply Tue 10 Jan, 2017 07:51 am
@edgarblythe,
That's a gorgeous image. I took the liberty of shrinking it a little so it would fit in the page. Hope you don't mind.
1 Reply
1
Reply Tue 10 Jan, 2017 08:46 am
Mention of Verne made me think of the Thunder Child, the fictional ironclad torpedo ram of the Royal Navy, destroyed by Martian fighting machines in H. G. Wells' The War of the Worlds, while protecting a refugee rescue fleet of civilian vessels. 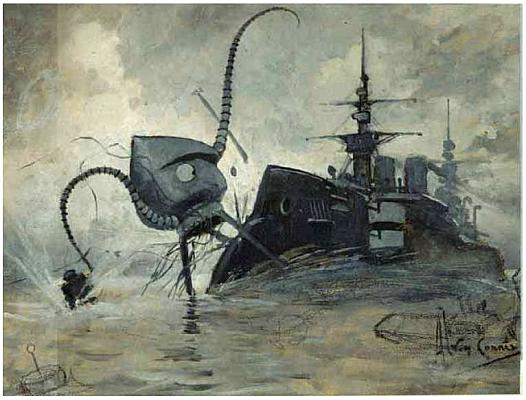 0 Replies
1
Reply Tue 10 Jan, 2017 08:51 am
I suppose their mothers must have loved them. I have to say I like the Royal Navy's World War 1 monitors such as HMS Marshal Ney. Like all monitors, not much ship but lots of gun.

The wooden decks farmer refers to were on the Essex and earlier class U.S. carriers. (I don't know of any others with wooden decks.) This was done because of their naturally high freeboard, and to keep the center of mass (gravity) below the volumetric (bouyancy) center to preserve roll stability.

The Royal Navy took a different approach with Arc Royal and other early carriers, outfitting them with steel flight decks. However this cost them in aircraft numbers and storage capacity for fuel and weapons.

The wooden flight deck carriers of the U.S. and Japanese navies were indeed vulnerable to dive bombing and aerial attack. The aviation gasoline used by the aircraft then didn't help either. Damage control measures were better developed and emphasized in the U.S. Navy than the Japanese, though they got better as the war progressed. I think their loss of three large aircraft carriers to USN dive bombers in ten minutes during the June 1942 Battle of Midway ( they were caught with thrir flight decks full of fuelled armed aircraft getting ready to launch) changed their attitudes.

Ironclads - the Floating Fortresses of the American Civil War

1 Reply
1
Reply Tue 10 Jan, 2017 12:10 pm
@Walter Hinteler,
I think the turret gun, in addition to the iron cladding , made the new navies possible.
0 Replies
1
Reply Tue 10 Jan, 2017 12:20 pm
@georgeob1,
Battleships had teak decks until they roughened the surface of metal decks and(I guess) learned how to deGauss the metal so didnt set off the ammo by static charges.
Sinking metal decked boats wasnt a big deal, it only took a slight change in the armor piercing abilities of ordinance and bombs

I spend a lot of time in our San Francisco office: the ratios of Engineers (good guys) to Geologists and Scientists (chemists, biologists, toxicologists, etc.) are 3:2:1. The bioloigists are all cheerful & upbeat, the chemists a bit dour and the geologists are .... well, .. geologists.

deGauss the metal so didnt set off the ammo by static charges.

Er... that was so that the ships didn't set off floating mines sensitive to the change in the Earth's magnetic field caused by an untreated ship's hull.

From one of Walter's links
0 Replies