Forums: Politics, Trump, American Politics
Email this Topic • Print this Page
-2
Sun 15 Nov, 2020 12:44 am
@coldjoint,
I don't want to be flaying President Biden, although I still have doubts about his ability to bring the progressive wing of the Democratic Party to his knees as AOC and other overweening Muslim Democrats coalesce behind either Bernie Sanders and his dogma or Islam thinking for which radical Muslims crave.

How to walk a fine line and keep acting like a centrist would be his paramount challenge. If he doesn't reel back from taking on such wild-eyed progressives and black interest groups, then we have reason to believe that Biden may be able to get the job done as the leader of the most powerful nation, particularly when it comes to fostering better relationships with European nations and cementing America's role as the vanguard of rules-based liberal order.

I also wouldn't call Trump a defeatist even though I'm not a conservative like you. It's plain that Trump still has lots of white working-class voters and pumped-up Latino voters chomping at the bit to vote for him. Plus, it's still too early to say that Biden has won the hearts and minds of black voters , in light of the fact that racial conflagration remains to be a vexing issue for years to come. Even liberals can't slur over the fact the BLM movement took root during the Obama administration. Thus, Biden has his work cut out for him; he also can't abrogate his responsibilities to black supporters with a black vice president looking over his shoulder.

In any event, it makes sense for both liberals and conservatives to be working together to build a bright future for the American people and a nation that happens to be called the United States.

Guys, time to get behind the same message that America has the duty to protect the Rights of Man and civil liberties instead of prickling at Trump's defeat.

1 Reply
0
Sun 15 Nov, 2020 12:52 am
By the way, I would have voted for Hillary Clinton if I had had a chance. She could have been a respectable female leader just like Thatcher and Merkel.
0 Replies
-2
Sun 15 Nov, 2020 01:14 am
@Builder,
I don't think Biden would want to embrace a world ruled by terrorist activities. To my mind, it's worrisome that he is surrounded by some madcap progressives keen on throwing their weight around. I would object to accepting their advice if I were Biden.
0 Replies
3
Sun 15 Nov, 2020 03:53 am 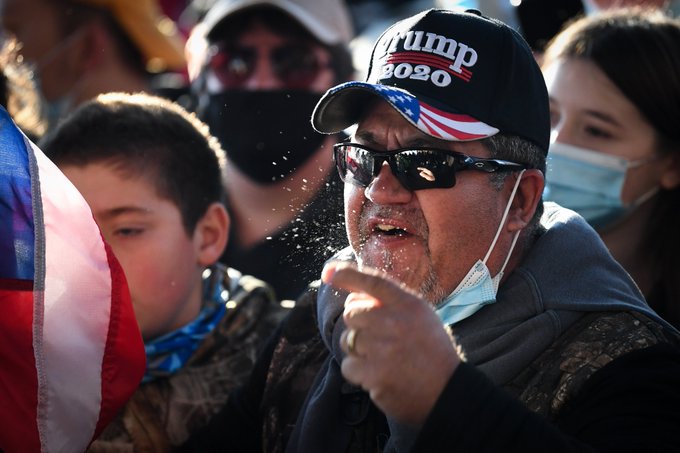 1 Reply
2
Sun 15 Nov, 2020 04:33 am
@hightor,
well, there goes another spike kicker. How many people were there a million or so? Man, theres gonn be some sickasses in two weeks. Like Sturgis
2 Replies
2
Sun 15 Nov, 2020 05:16 am
@farmerman,
It was a real dead loss, the “mainstream” supporters stayed at home rather than march with a bunch of neo Nazi losers like the sad boys.

How many people were there a million or so?

0 Replies
3
Sun 15 Nov, 2020 08:02 am
Trump admits today that Biden won (well, sort of) but repeats the baseless claims of election fraud, and he also lashed out at Fox News.

The poor mad bastard is really losing the plot.
0 Replies
5
Sun 15 Nov, 2020 09:44 am
This morning John Bolton said the election fraud conspiracy is so vast and so successful that there’s no evidence of it.

The rest are too bloody scared.
1 Reply
3
Sun 15 Nov, 2020 10:12 am
@izzythepush,
Yeah I just had a Twitter discussion with someone who was singing the praises of Justin Amash for speaking out against Trump. Amash was the only Republican (since then he switched to independent) congressman that was for impeachment, just like Romney was the only Republican Senator.
I was saying how our expectations of our “leaders” have been beaten down so badly that now we’ll almost erect a statue for one of them that minimally does the right thing.
1 Reply
3
Sun 15 Nov, 2020 10:15 am
@snood,
You mean all those links and tweets of "evidence" posted by cj are all made up?

I'm shocked. SHOCKED! Well, not that shocked.
1 Reply
3
Sun 15 Nov, 2020 10:20 am
@snood,
The people on the protest in DC yesterday were wearing bullet proof vests and carrying all sorts of firepower.

They are every bit as armed and dangerous as the brownshirts, it’s not just electoral damage that stops people from speaking out against Trump.

I don’t want to call them cowards if there’s a very real chance their families will be targeted by groups like the Proud Boys.

These people view the second amendment as the right to threaten, intimidate and ultimately kill those they disagree with.
1 Reply
3
Sun 15 Nov, 2020 10:27 am
@izzythepush,
Sorry, but I do call them cowards. Hey they call themselves patriots and statesmen.
It’s called courage because you act in spite of risk; you act in spite of fear.