The Secret Service has moved out of Trump Tower in New York City to a street-level trailer in a dispute with the Trump Organization over a lease.
The federal agency which protects US presidents has been renting office space in the Midtown Manhattan skyscraper since 2015.
But its representatives are baulking at the cost and other unspecified rental terms, reports the Washington Post.
The Trump Organization said the agency should look elsewhere.
Since Mr Trump became a front-runner in the presidential race two years ago, the Secret Service has stationed its command post in a unit one floor below his triplex residence.
But its nerve centre was relocated in early July this year to a trailer 58 floors below on the street, it has now emerged.
The General Services Administration, a government agency which arranges office space for federal employees, has been negotiating terms with the Trump Organization.
According to the New York Times, it was the president's real estate company that objected to the insertion of a clause in the contract.
The Trump Organization did not clarify the sticking point.
But in a statement to US media, spokeswoman Amanda Miller said: "After much consideration, it was mutually determined that it would be more cost effective and logistically practical for the Secret Service to lease space elsewhere."
Secret Service spokeswoman Catherine Milhoan told the Washington Post that it was continuing the search "to obtain permanent work space in an appropriate location".
Mr Trump has not visited the tower since his inauguration, but his two adult sons, Eric and Donald Jr, often work there.
Security analysts say the Secret Service's relocation to a trailer outside could hamper radio transmissions between agents and the president's family inside the building.
GSA spokeswoman Pamela Dixon told National Public Radio in an email that the agency does "not comment on projects in active procurement".
The Secret Service is not the only government agency occupying space in Trump Tower.
The Pentagon is renting a 3,475 sq ft unit there for $130,000 ($100,000) a month, but it is reported to be privately owned so the Trump Organization will not profit. 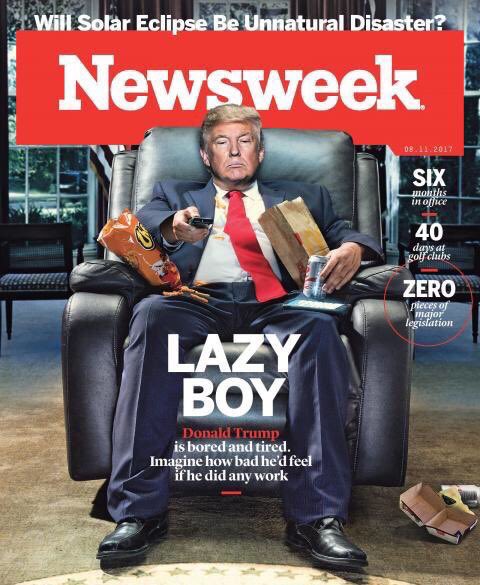 And yet he's a real solid Republican?


You tell me. Trump really likes him.


Any politician who switches parties to improve their chances of election or re-election is not a solid member of either party.

Trump is hardly the proto-typical, solid Republican himself.

The Senate blocked President Trump from being able to make recess appointments on Thursday as lawmakers leave Washington for their August break.

The move, which requires the agreement of every senator, means the Senate will be in session every three business days throughout the August recess.

Is Trump financially profiting from the agency that is responsible for protecting him?

Not in this case, but likely in others.

Correction. I was specifically referring to the Trump tower I read in the Izzythepush post.
1 Reply
3
Fri 4 Aug, 2017 10:19 am
@Real Music,
Real Music wrote:

Not in this case, but likely in others.

Correction. I was referring to the Trump tower I read in the Izzythepush post.


I know. The last sentence of that article says the space that the secret service was leasing was privately owned (not by Trump).

Sustained attack has been in effect against McMaster for the last two days. He has said Rice did nothing wrong + fired a key Bannon ally

who wins this round of Kushner v Bannon?

I heard somewhere the market's confidence comes in part from anticipation of the massive tax cuts Trump/Ryan are expected to deliver.


That's my suspicion too. It's speculative.

I was just giving Finn an opportunity to point to some actual thing that Trump may have done to cause "Trumps Bull Run".
1 Reply
5
Fri 4 Aug, 2017 11:22 am
@maporsche,
maporsche wrote:

I heard somewhere the market's confidence comes in part from anticipation of the massive tax cuts Trump/Ryan are expected to deliver.


That's my suspicion too. It's speculative.

I was just giving Finn an opportunity to point to some actual thing that Trump may have done to cause "Trumps Bull Run".


Those defending Trump seem to take it on faith that any good numbers are because of Trump and any bad numbers are because of fake, biased news. I wish they could explain how the good numbers before Trump were fake but as soon as Trump got in office they started touting the same numbers as proof of Trumps success.
1 Reply
4
Fri 4 Aug, 2017 11:31 am
@Finn dAbuzz,
You do realize that you are giving credit for " the sunrise" to Mr Trump. I don't think anyone gave Obama any credit for his watch and how much the market recovered from the previous admin's tankage. Could the "trump bump" be more an Obama Melodrama?

Who self-appointed himself as "the world's greatest person"?
0 Replies
0
Fri 4 Aug, 2017 12:35 pm
@maporsche,
Maybe you didn't notice that mine was in response to a chart blatham posted
1 Reply