Not sure if you're into podcasting, but Dan Carlin just released an episode of Common Sense with Dan Carlin that hit some of these points pretty well too.

Gee, where is George Carlin when I and others need him...

I have watched Maher show a time or two, I am offended by him on several levels and I don't even agree him as much people might think considering I am a leftist. On the other hand, I have not listened Jones but I have read about him and his views. Perhaps the reason the author of the piece disclaims (I didn't read the piece) equivalency is because Maher is really just a political comedy entertainer, nearly everything he says is said in a snarky joking way. I don't think Jones is an entertainer, but a serious political talk radio host.


Bruni was discussing them as both being essentially entertainers who both behave outrageously in an attempt to get bigger audiences and thus, more money. (I don't know how this would differ significantly from "serious" columnists in the NY Times or any other paper, who are more artfully hateful but are still driven by pandering to their readership)

Aside from any contentions that one is more vile than the other, the distinction between the two is how they entertain. Maher seems more of an entertainer because he is comic and that is a traditional attribute of someone who entertains, but humor is only a vehicle for Maher's political views and sometimes nasty vitriol. It's the talent that enabled him to gain a platform for his political views. Sometimes he can be very funny, but very often his most vile and hateful comments are delivered in the form of a joke or "humorous" quip.

People like Maher who use comedy as an important element in the communication of their political views often also try to use it as a shield, arguing or accepting the arguments of supporters that they are, after all, just a comic and many comics trade in insults and and outrageous statements. The implication is that anyone offended by what a comedian says is a tight-assed prig lacking a sense of humor. This is ridiculous of course. A comedian joking about lynching African-Americans might possibly do so within the construction of a joke that triggers an immediate humor response in someone who would never suggest there is anything funny about the subject. Whether or not the listener has an uncontrolled, spontaneous humor response or simply reacts with disgust, it doesn't mean, in the case of the former, that they have a sick sense of humor or, in the case of the latter, no sense of humor at all.

There's something of a science to humor and joke construction that involves triggering basically involuntary reactions in the brain and body. Construct a joke that contains all the necessary elements of surprise, irony, paradox etc, and is delivered in a rhythm that sets the listener's brain up for a joke, and a comedian can get a laugh out of just about anything. Listeners who immediately react with an impulsive barked laugh may feel horrified and ashamed, but they have merely had their neural wiring cleverly manipulated. I would be surprised if you have never immediately laughed at a joke, at some time in your life, that, one second later, you realized contained content that's not in the least humorous. It probably was something much, much less serious than lynching or the holocaust, (very often it's in the case of a joke that makes fun of an individual) but it's tough sometimes to resist the manipulation of a gifted comic and most people have experienced the troubling moment of having laughed at something they know is not in the least bit funny.

My point is that regardless of whether or not anyone laughs (and I'm quite sure a good chunk of Maher's audience laughed at his obscene joke about Trump and his daughter) hateful and vicious comments are not somehow excusable because they are delivered in the form of a joke. People are inclined though to forgive comedians which is one of the reasons people like Mahr use comedy to spew their vile comments. There's a thin line involved and most people are uncomfortable crossing it and condemning the comic because of the implication that it signifies they don't have a sense of humor.

For all I know Jones doesn't employ humor when he entertains, but I wouldn't be surprised if he did. Probably safe to say that it's not the sort of urbane and witty humor Mahler uses, but it's tough to imagine someone having a broad popularity who is always deadly serious. Even if he really can't, like Maher, be considered a comic he is entertaining his audience. I'm sure some folks tune in to be educated, but I suspect most do to be part of a ideological echo chamber which they find entertaining, and in any case, my experience has been that the best teachers are those who educate in a way that entertains.

Ultimately, if Jones is as vile as so many people think and Maher is as vile as I and so many others believe him to be (an assessment with which you seem, to some extent, to agree) then Maher is not less vile simply because he uses humor to deliver his hateful comments. In fact one might argue that the perversion of something that gives so many people such pleasure (humor) makes him worse. I'm not making that argument but I wouldn't consider it unreasonable.

A serious political talk radio host, while not an oxymoron, doesn't immediately conjure up the image of a highly influential power broker. There are a few who might be accurately considered to be highly influential in terms of their audience (Limbaugh immediately comes to mind) but assertions about their power extending beyond their listeners seems greatly exaggerated to me. I certainly can't imagine that Alex Jones is any more influential or powerful than Rush Limbaugh and depending upon his audience size, he may not even match Maher's influence.

In any case my point about the Bruni column as it relates to Maher and Jones is that Bruni obviously thinks Jones is more vile and more influential than Maher, and therefore he has deliberately used a pairing that allows him to throw his jab: The right is worse than the left when it comes to this thing I wish to condemn.
0 Replies
6
Mon 19 Jun, 2017 03:10 pm
The White House conducted a press briefing today that was blacked out. No audio or video was allowed to go out to the public. They are really trying hard to get control of the narrative.
1 Reply
0
Mon 19 Jun, 2017 03:30 pm
Quote:

The Kids Are Alt-Right

BuzzFeed News reviewed more than 50 reports of school bullying since the election and found that kids nationwide are using Trump’s words to taunt their classmates. If the president can say those things, why can’t they?


Donald Trump’s campaign and election have added an alarming twist to school bullying, with white students using the president's words and slogans to bully Latino, Middle Eastern, black, Asian, and Jewish classmates. In the first comprehensive review of post-election bullying, BuzzFeed News has confirmed more than 50 incidents, across 26 states, in which a K-12 student invoked Trump’s name or message in an apparent effort to harass a classmate during the past school year.

In the parking lot of a high school in Shakopee, Minnesota, boys in Donald Trump shirts gathered around a black teenage girl and sang a portion of “The Star-Spangled Banner,” replacing the closing line with “and the home of the slaves.” On a playground at an elementary school in Albuquerque, New Mexico, third-graders surrounded a boy and chanted “Trump! Trump! Trump!”

On a school bus in San Antonio, Texas, a white eighth-grader said to a Filipino classmate, “You are going to be deported.” In a classroom in Brea, California, a white eighth-grader told a black classmate, “Now that Trump won, you're going to have to go back to Africa, where you belong.” In the hallway of a high school in San Mateo County, California, a white student told two biracial girls to “go back home to whatever country you're from.” In Louisville, Kentucky, a third-grade boy chased a Latina girl around the classroom shouting “Build the wall!” In a stadium parking lot in Jacksonville, Florida, after a high school football game, white students chanted at black students from the opposing school: “Donald Trump! Donald Trump! Donald Trump!”

Please read the rest of this article linked above and the comments as well when you have time.

If I refrain from being a fool, this post will be my last in this topic. I'm sick and tired of politics, which seem to bring out the worst in people. Just witness all the arrogance and hatred. There are decent people in both parties as well as jerks, creeps, and criminals. There is no room in the debased political culture of this country for non-ideological pragmatists. No room at all. Both parties have become mindlessly polarized. For example, concerning the Democratic Party, if you are opposed to abortion, forget it. If you have a traditional view of the family and oppose same-sex marriage, forget it. If you have even the slightest reservation about pornography's effects on children and the rest of society, forget it. Even if you are liberal about other issues, forget it! That isn't enough! The Republican Party is the same (regarding different issues) because, like I've just said, both parties are polarized. Only the ideologically pure are welcome. As a Christian, I would have to violate my conscience to support either party. (By the way, I consider the Religious Right to be nothing more than a bunch of hypocrites grabbing for power. Principle means nothing to them, and they are beyond embarrassment.) I expect Trump to be re-elected because the Democrats are as unpopular as he is. I don't believe the situation will change for the better. I believe it's going to get even worse. Possibly a lot more. I see the country eventually becoming a one-party oligarchy with a Constitution re-written to benefit certain big money interests and no one else. (Trump is a populist? Ha!) As far as my reaction to this latest President is concerned? I never thought I'd long for George W. Bush! No wonder I've given up on politics. I'm a 67-year-old American who has studied American politics for nearly 50 years. Now I'm no longer interested. It really was a waste of time. Well, at least I've not been susceptible to being brainwashed by boringly predictable ideological zealots of either the political right or the political left. I can be thankful for that.
2 Replies
-1
Mon 19 Jun, 2017 03:45 pm
From Huffpo:

Much has been made of the possibility of impeaching Trump, but this will not happen as long as Republicans maintain control of Congress. However, Trump’s impeachment and removal from office are no longer enough....

They must be convicted (there is little room to doubt their guilt). And then — upon receiving guilty verdicts — they must all be executed under the law. Anything less than capital punishment — or at least life imprisonment without parole in a maximum security detention facility — would send yet another message to the world that America has lost its moral compass. 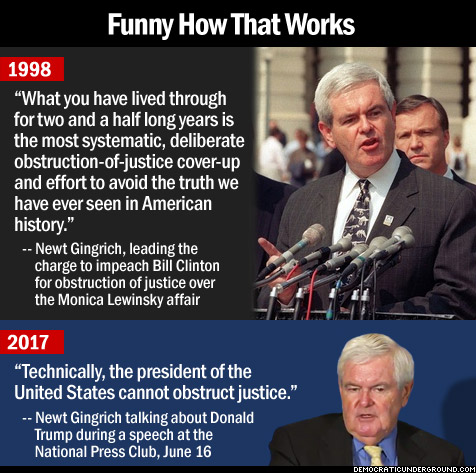 
Clever you're not.
0 Replies