The Art of cartoonists 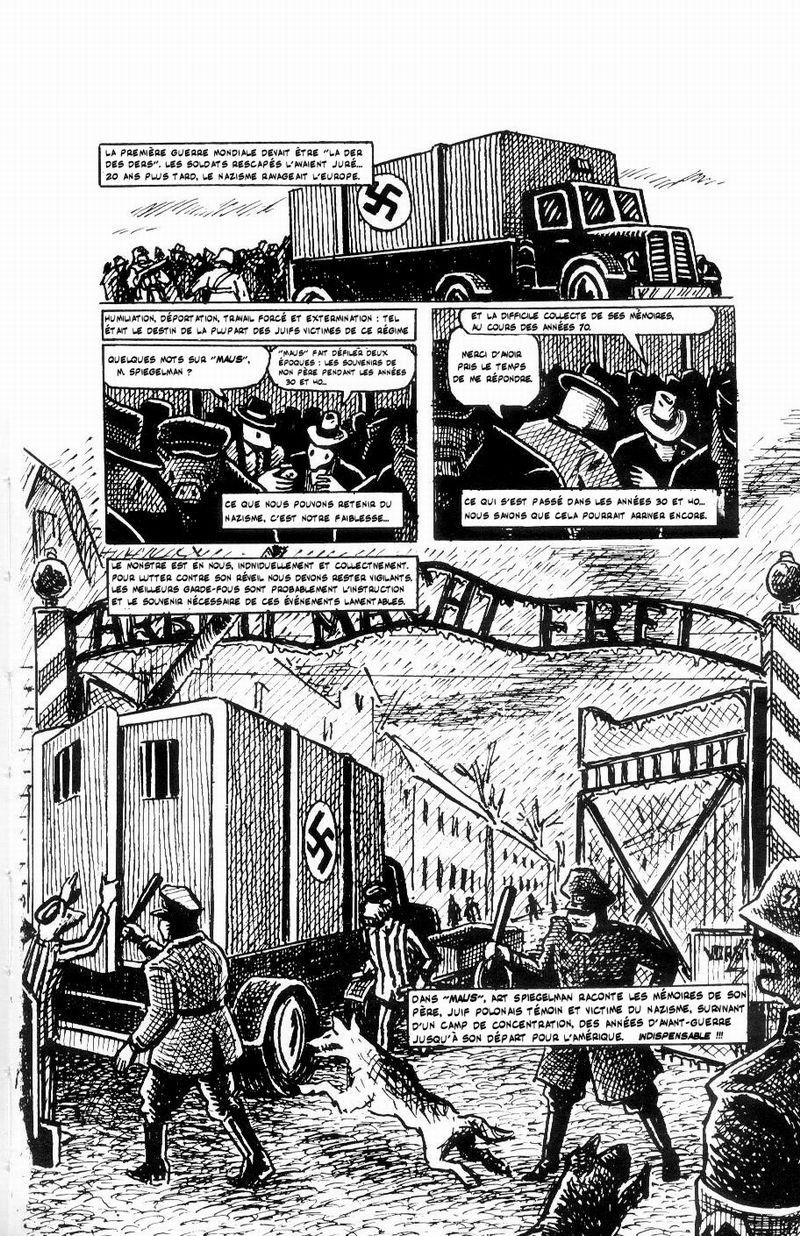 (More scientific here: Jewish Fathers and Sons in Spiegelman's Maus and Roth's Patrimony
0 Replies
1
Reply Wed 29 Sep, 2004 01:21 am
Thanks, Walter. I've added the interview to my Favourites. It looks fascinating.
0 Replies
1
Reply Wed 29 Sep, 2004 01:55 pm
I really like cartoons. It could easily be a hobby, but it never became quite that. But there's some beautiful stuff out there. My 'eyes were opened' when I spent one afternoon in a cartoon store in Kreuzberg, Berlin. They had all this freaky underground stuff, and then amazingly arty stuff, and then some entertaining daily-life stuff - all of which I hadnt seen before. Musta been '95 or something. I went back there once or twice. Wonder if I could find back the name of that shop ...

Here we are: Modern Graphics on the Oranienburgerstrasse. Great stuff.

A book I bought there for a friend of mine is still one of the most impressive I've seen. I reread it just a year or two ago when I visited her. A cartoon rewrite of Paul Auster's City of Glass, part of his New York Trilogy, by <looks it up - isnt the net great> Paul Karasik and David Mazzucchelli.

Well, I read New York Trilogy too, and it was a dizzying concept of a claustrophobic book, turning what starts out like a regular private eye film noir kinda story into a near-mathematic breaking down of reality and identity. Yeah, that sounds heavy, and the book is, at least the second, third part. Interesting though.

Surprisingly, this graphic adaptation (is what you should call a cartoon like this, I guess) has the same intensity and depth, but balled together - and apart from reading like a spellbinder, really adds a whole second layer to the story. The drawings (simple enough drawings) add something of a second voice, as if two writers are telling the same story but from different vantage points - the drawings actually adding further meaning rather than simply visualising the existing story.

Along the way, you get the private eye story and that of its writer who loses his way, spiralling off the road of sanity as his alter ego delves into the ambiguous, disturbing tale of an abused child - all of it, so to say, ending up a mapping of madness, which is not chaos but a gradual wiping of the slate until nothing remains. It's chilling, yet you can't lay it aside. Lemme see if I can get some samples.
0 Replies
1
Reply Wed 29 Sep, 2004 02:17 pm
Oh my God, that's trippy. OK, so you know me, right, so you know that I, like, come prepared. Thought about posting to this thread, so there's a small pile of my favourite cartoons on the table - 8 or 9. And that must be a pretty random sample, because like I said, I'm hardly a collector - just happen to end up in a store every few years.

So I Google up "City of Glass", which isn't among them, and find this webpage, which showcases a handful of books including Maus, City of Glass and one of the books on my table now, Gaiman and McKean's Signal to Noise. More on that one later - it's amazing. Its also got the cover of a Chester Brown book (I remember reading one in the store - very wry, kinda knocked me off-balance) and Chris Ware's The Acme Novelty Library (on my table: My New Novelty Library).

0 Replies
1
Reply Wed 29 Sep, 2004 02:37 pm
OK, another one that's not on my pile, but browsing around I saw something that reminded me of it. Michael Dudok de Wit's "Father and Daughter". It's an 8-minute, Academy Award-winning animation, but I never saw it (when do cinemas ever screen 8-minute animations?). But I gave the book as a gift to a friend of mine when she was grieving herself. Father and Daughter is a simple tale of a daughter coming to, or passing by, the spot at water's edge where her father once left her - and everybody - forever. As a little girl, a teenager, etc. Very beatifully drawn.

(The whole eight minutes of teh animation are recounted in minute detail on this page, under "Craft Notes". Dudok de Wit's website should have some samples ...

Yep, here you are:

My chest still clenches when I think of his father just throwing out his mother's journals. (Of all the horrible things in those books, somehow that stands out.)

"The Wild Party" is graphically gorgeous.

R. Crumb has to be mentioned here, if he hasn't already.
0 Replies
1
Reply Wed 29 Sep, 2004 03:15 pm
Anyway, I'll look up one more and then I'm going to bed, cause I have a splitting headache. In Brussels, too, there is a store that sells only comics (OK, "graphical novels", whatever) and that has an amazing selection ... <looks it up> ... Tropismes Libraires. (OK, so they got one regular bookstore and another store with only cartoons and childrens' books).

Looking around there, I found the cartoons/drawings of Nicolas de Crecy. Amazing. All I went home with in the end was a "monographie" of his work (so no story, just individual drawings and sequences from his books - here, this one). Have any of you seen Les Triplettes de Belleville, the animated movie that was playing earlier this year or last year? Quite the same style, I wonder if he was involved. 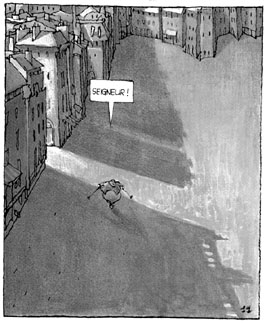 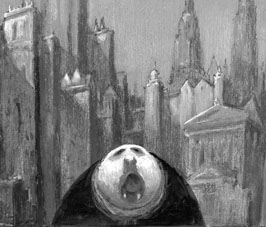 I was out looking for pictures when you posted ...

It's so trippy. I swear, I woke up one morning, and either I had dreamed, or I had just sleep-thought a little. And I'd been saying to someone, I wonder if Spiegelman now made a book about 9/11. (Did I say yet that I don't follow this stuff, and thus don't have a clue what's going on?)

Anyway, the ironic thing was that, in A2K discussion style, I went all off on myself. Like, that's the short-sightedest thing I coulda said. Just because he wrote a book about the Holocaust - his own father - he's, what?, supposed to suddenly turn the nation's chronicler of disasters or something? Inane.

Thats how I went off on myself. And then the next day or two or three days later, I open TNR online and what do I see but a review of Spiegelman's new book - on 9/11.

Came across a few reviews by now, but they're not very positive. Like - "it all looks beautiful, but it's all so eclectic and disembodied that you're somehow never moved by it". I dunno. I'll probably be awed at it.

Anyway, here's one more of de Crecy - biggie. The two pictures in the monographie I like best are from a series he did on Recife for Geo, but I cant find them online. Very different style from the above, such striking use of colour. This one is a little bit like it:

Wow, I really went looking for those Crecy pics. When there's a bunch of other books I'd wanted to look up pics from. Later.
0 Replies
1
Reply Wed 29 Sep, 2004 04:12 pm
It seems to me that there are cartoonists who are artistic (like many disucssed here) and artists who are sometimes cartoonish, e.g., Daumier and the later Philip Guston.
0 Replies
1
Reply Wed 29 Sep, 2004 08:13 pm
Love the de Crecy stuff. Hadn't heard of him before. The last one, the stairs and red banner -- absolutely gorgeous. (And very evocative, makes me think [though probably not true] that I have been to that very spot.)

I haven't seen any reviews of "in the shadow." I wondered if he'd do something about it, too, in part because he did some great 9/11 New Yorker covers -- I don't remember, I have them saved though. (I am SO annoyed with the New Yorker that they started doing the address labels right on the covers... for a while they at least used some adhesive that came off nicely and didn't leave a mark, but now it's impossible to get it off. They want you to buy the covers separately I guess. Grrr. Anyway.) I think one was just black, all black, then you noticed that some of the black was matte and some was glossy, and the glossy black was in the shape of the towers. 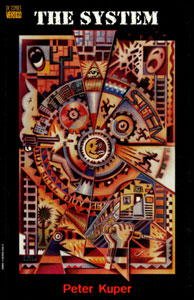 I can't find any pictures from the inside, but here's a clearer picture of the cover illustration:

It's an exciting read: entirely without words, he draws a series of apparently unrelated occurrences in the city that gradually turn out to all be causally intertwined. Very hectic, colourful, urban. And also political - the guy's very political apparently, this is his website. Here's an interview with him, didn't read it yet.
0 Replies
1
Reply Thu 30 Sep, 2004 05:25 am
I'm really intrigued by his work, too, nimh. All the ones you've posted, particularly the dark & mysterious ones, like this one:

Oh, looking back I see it's not. Nevermind.

Send one of your efforts here, when/if you can!

Hello to you too! I know I've been kind of lurking about, busy at work and at home trying to get the art career officially launched. I get to quit my horrid retail job January 10th and dedicate myself full time to my art!! I'm so excited! Most of my cartoon ideas are barely out of stick figure stage but I will try to post some when I get them done.
0 Replies