The Democratic primary isn't anywhere as bitter as it looks online

Engineer, listen! This is important.

Max, read! It really isn't all that important, but I'm posting in a thread about how the primary isn't as bitter as it looks online and it looks bitter online. I am speculating about behaviors we've seen online (and had spill into real life) and some of the potential root causes. If that isn't a discussion you want to have, don't have it. If you want to argue that Sanders and Clinton supporters both engage in this type of behavior and that I'm just overlooking all the Clinton supporters when they threaten reporters and delegates, feel free to post that. If you want to propose a different hypothesis as to why we only see this behavior from partisans of certain candidates, I'd like to hear it. If you want me to stifle my ponderings because they upset you, that's not going to happen. I'm here to discuss stuff, not get with your program.
0 Replies
2
Reply Thu 9 Jun, 2016 10:23 am
@sozobe,
Yeah, and the Pollster average never had Trump overtaking Clinton in the first place: 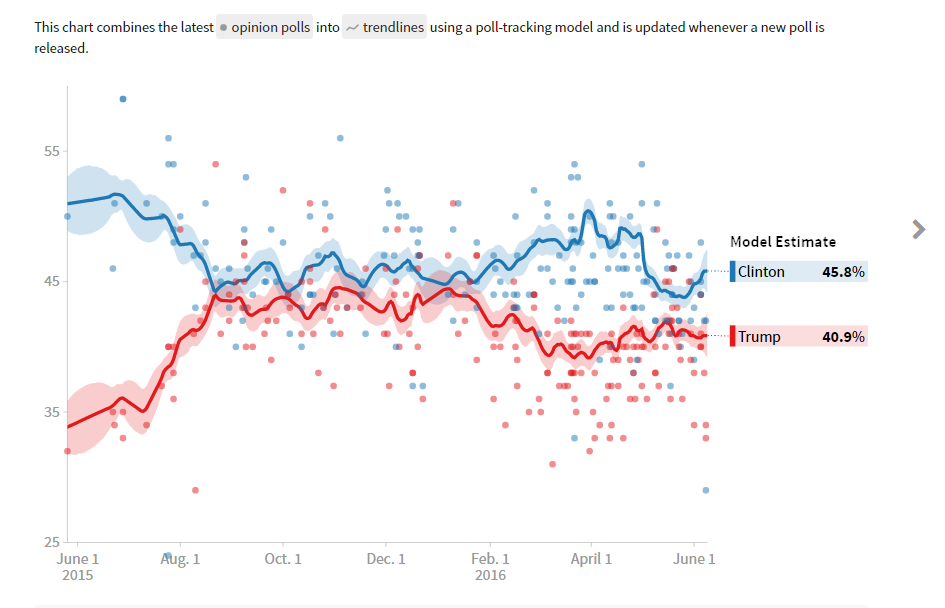 Clinton will win it easily. There is no doubt that barring something truly unexpected Clinton will be our next president.

That doesn't mean that the debates between her and Trump, and the continuing meltdown of the Republican party, won't be awfully fun to watch.

I don’t have 1 iota of trust in Perez, but Bernie seems to have extracted a deal he ostensibly trusts... or can use later in a lawsuit.

NOTHING will ever be more interesting than the coming year and change in American politics....and associated global ramifications.
0 Replies
-3
Reply Sat 8 Dec, 2018 02:12 pm
Sweeping Europe... The Anti-Establishment Revolution that has been on simmer for about a decade just turned up a notch.

Getting my yellow vest.

0 Replies
-1
Reply Fri 13 Sep, 2019 10:50 am
Interesting now to read the pre election 2016 comments above (those before Lash reopened the thread). They certainly do reinforce the notion that Democrats failed to see or acknowledge the building support for Trump in the last election.

Observations on the Democrat debates last night;
=> Biden did well and appears to be retaining his support among Democrats - contrary to my earlier predictions.
=> Cruz & Beto O'Rourke grabbed a lot of, much needed (by them) attention, with their outbursts, but neither benefitted much from it and both remain on the margins in this Primary..
=> Bernie Sanders' support appears to be continuing, but not growing. The lack of any factual backup for his many social programs is starting to show.
=> Elizabeth Warren remains a serious contender (more likely for a VP slot) , however she is also a bit hard to like.
=> There is less to Kamila Harris than meets the eye, and continued exposure is making that more apparent.
=> The remaining 2nd rank candidates, Booker, Buttigieg et. al. held their ground, but increasingly the contest is between Biden, Sanders, and Warren
0 Replies
1
Reply Sat 14 Sep, 2019 08:53 am
Joe Biden just effectively wrote his resignation letter to me in his quest for the nomination.

I believe we need someone who can be blatantly anti-racist to stand against the white nationalist dupe in the White House.

He was asked how, at the 400-year anniversary of the chattel slavery of black people in this country, our country can best address the legacy of slavery. Joe Biden answered to the effect that black parenting needs to improve, and that
black children need to have more books read to them and more music played to them ( on “record-players”, no less).

His answer showed me clearly something that I’ve suspected all along about Joe, but sort of ignored because I want to beat Trump so badly and was buying into electability arguments. Joe is NOT a racist in the insidious and evil sense, but he is just not equipped to grapple openly with the structural, institutional racism that continuously corrodes our society.

Forty years ago, when he was asked about the legacy of slavery, he basically answered that he wasn’t responsible for that. And 40 years later when asked how to address the legacy of slavery, he says black people need help parenting. That is not anti-racist. That is the benign sort of go-along-to-get-along folksy stuff that would leave Donald Trump’s coddling of white supremacy and white nationalism unaddressed.

Trump’s racism is too central to what the fight is about to leave it effectively unaddressed.

Here's a few more for you


By the way, this bullshit Bernie Bro **** was completely fabricated by Hillary Clinton’s campaign.

I guess you all know this now.
0 Replies