Snow drifts of 6 to 10 feet and low visibility were reported in Roosevelt and Quay counties. Wind gusts of up to 60 mph and negative wind chills created hazardous travel conditions, officials said.

Several motorists were stranded, and drivers were urged to stay off the roads.
Type: Discussion • Score: 11 • Views: 3,043 • Replies: 20
1
Reply Sun 27 Dec, 2015 11:51 am
@Butrflynet,
got plenty of hot chocolate? I remember a late winter blizzard I got caught in hen driving from Albuquerque to Mexican Hat . I was stuck in my car for several hours and it was a POS Buick
1 Reply
1
Reply Sun 27 Dec, 2015 11:57 am
The front is slated to pass here, this afternoon. We will go from 78 degrees to thirty eight by morning. There is a tornado watch, until four PM. Right now, the rain has paused, but gusts of high wind are occurring.
0 Replies
2
Reply Sun 27 Dec, 2015 11:59 am
@farmerman,
craziness 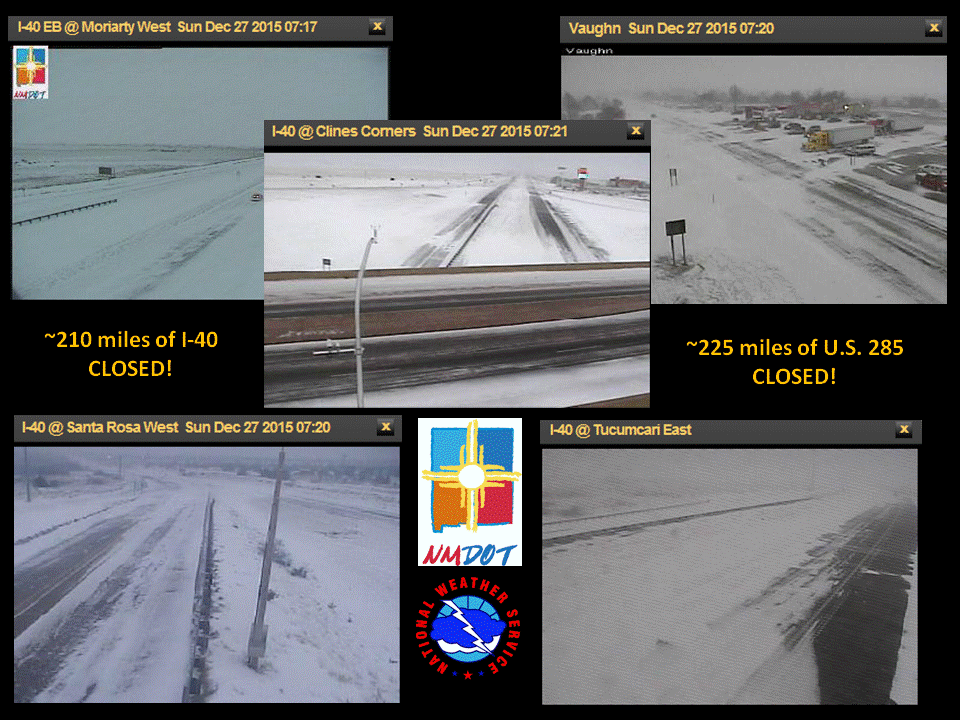 0 Replies
1
Reply Sun 27 Dec, 2015 12:40 pm
It was this time of year exactly when I drove from Northern California to Albuqueque, trying to beat the moving fan. I took highway 10 instead of 40 to avoid snow but of course that could have been iffy too, at least when I got to highway 25 north. I take myself as lucky then in that I haven't driven in snow, since most of my experience of snow was as a child playing in it or riding with my parents, or adult with others doing the driving. I'd be a fool on black ice..
0 Replies
1
Reply Sun 27 Dec, 2015 02:00 pm

Snow on the Westside. News is saying some parts of the foothills got 19 inches of snow. We got about 6 inches with another 3 expected today. None of the roads around here are plowed or salted and the snow is hard frozen. We won't be above freezing for 4 days so this will be around a few days.
0 Replies
1
Reply Sun 27 Dec, 2015 02:02 pm
Fortoonately, we are having snow, here, around Houston. Right now it is dry, but the wind is dangerous.
0 Replies
1
Reply Sun 27 Dec, 2015 02:13 pm
New Mexico governor declares state of emergency because of snow

SANTA FE, N.M. —Gov. Susana Martinez has declared a state of emergency due to the massive snowstorm, meaning the National Guard will be out to assist stranded drivers.

A blizzard warning is in effect for all of eastern New Mexico. The winter storm has already dumped as much as 21 inches of snow in some areas.

I-40 is closed from Louisiana Blvd. to the Texas state line. Right now, the closure is indefinite. Hotels along the closed interstate are completely booked.

Almost every major road around Roswell, Artesia, Portales and Alamagordo are closed.

I-10 is closed from Lordsburg to the Arizona state line.

There are more than 10,000 homes without power across Eastern New Mexico.

Two shelters are open right now in New Mexico. One is in Clovis located at Roy Walker Rec Center at 316 West 2nd Street.

There is a warming shelter in Sierra Blanca High School Gym in Hudspeth county, Texas. Right now 18 people are there.

Red Cross is opening a shelter in Culberson County. The location hasn't been determined.

ABQ Uptown will remain closed Sunday. The Albuquerque Sunport is seeing little impact. ABQ Ride is running, but could be on a delay. ABQ Uptown is closed due to weather. Normal business hours resume Monday.

0 Replies
2
Reply Sun 27 Dec, 2015 02:44 pm
Yeah, the storm rolled through here, the a-hole o' Texas, yesterday. The storm hit the mountains first, and it made the Sun Bowl game between Washington State and Miami anything but sunny.

My wife got a craving for Chico's Tacos, so I did a taco run through that storm. The place was packed, snow storm be damned.
0 Replies
1
Reply Sun 27 Dec, 2015 05:18 pm
@Butrflynet,
Is this thread a hoax? I'm sitting here, maybe 180 miles from your doorstep, just wondering what is on your mind. The sun is shining, the skies are clear, and the temperature is right at the freezing point. Okay, I can look around and find some snow in sun sheltered spots, but it'll probably be gone in two days.
1 Reply
1
Reply Sun 27 Dec, 2015 05:51 pm
@roger,
I live in the same zip code as Butrflynet but our weather seems to vary - I've noticed that before; I'm not sure how far away I am as the bird flies. Pretty far if you measure via Unser. As far as I can tell, I only had three inches of snow when I awoke in early morning while it was still cold and it started melting, um, five hours ago or so, pretty cleared out looking out my back door right now. On the other hand, Albuquerque is a broad place land-wise and stuff differs. Also, even at my place it's suppose to go down to 15 F tonight, get to 39 and clear w/ sun tomorrow, and temp to go back down at night. I've fair hope of getting to the grocery store tomorrow (not a driver in snow these days).

Meantime, the Accu Weather people told me about an hour ago that I'd have snow coming down again right about now. Just looked, and they're telling me 8:30 pm now, which sounds about right. Snow Roulette...

Well, that's just here - tough stuff happening for people on the east side or further out of town.