The 7/11 on the corner also sells groceries. I should inform them that they are a super market according to some British twit. Target sells groceries now. Are they now a supermarket?


You actually do know that you are putting words in other people's mouths. It makes you appear to be a sorehead by pretending you don't see a difference between Walmart and a convenience store. Frankly if our friends in Canada, Australia, Germany and Great Britain assume you are the average American, you are doing a great disservice to the rest of us. Not everyone needs to devalue other countries in order to feel good about ourselves.

And just to satisfy my curiosity, how high does the death toll of children have to be in order for you to suspect it might be a problem?

How about you come over to our side and pull in for the big win, huh?
4 Replies
4
Reply Fri 2 Oct, 2015 05:00 pm
@McGentrix,
I think the term they use in the rest of the world for a "Walmart" or "Atlantic Superstore" is a hypermarket. I dont think I ever heard that term used to describe a Walmart Super Center in US.

When a guy asks his victims if they are Christians and then tells them they will see God in less than a minute before killing them when they say yes, I can't help but wonder - WTF...
3 Replies
5
Reply Fri 2 Oct, 2015 05:42 pm
@McGentrix,
No one is trying to redefine words. Walter choose a word that he thought appropriate. You have decided to make a big patriotic argument about it. His assumption was logical, I'm sorry you can't see it. But I'm betting you are doubling down to make a point only you understand. You seem bitter and angry, I don't enjoy the company of bitter, angry people so whatever side you think you're on, I think I'll pass. Please don't claim to be a red-blooded American, I've spent decades working for DOD, and I'm not impressed the only Constitutional Amendment you are aware of is the Second.

My guess is you want to avoid telling me how many and how frequently children have to die before you think it's enough. I've raised children and managed civilian and military personnel during my career. I recognize re-direction when I see it.
1 Reply
-2
Reply Fri 2 Oct, 2015 05:50 pm
@Leadfoot,
Quote:

productive for people to ponder what drives people to shoot over 30,000 people a year


Oh reality check here homicides are going down not up in the US and is at one of it lowest point in s hundred years. Not that you would know it by the news media. 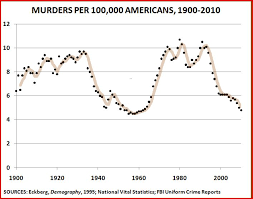 2 Replies
2
Reply Fri 2 Oct, 2015 06:00 pm
@farmerman,
I heard that in Lucca, re a proposed hypermercato, however that was spelled, when I wandered over to talk to protesters.
I don't know what happened, but I could guess, being only there four or so days.
0 Replies
3
Reply Fri 2 Oct, 2015 06:03 pm
@jespah,
I prefer our country being less gumballed about the allure of guns.
Of course I mourn the victims.
I'm presently reading a book where the smart guy is reconnoitering a gun show..
about silencers.

Geez.
0 Replies
1
Reply Fri 2 Oct, 2015 06:28 pm
@Baldimo,
All you do is deny reality. I'm able to look in, and it's ******* ridiculous. Whenever a mass shooting happens most counties take a look at themselves and fix the problem, You deny the problem exists, blaming terrorists, the mentally-ill, anything but address the issue, your gun laws. So it keeps happening, again, and again, and again.
0 Replies
1
Reply Fri 2 Oct, 2015 06:32 pm
@McGentrix,
McGentrix wrote:

The 7/11 on the corner also sells groceries. I should inform them that they are a super market according to some British twit. Target sells groceries now. Are they now a supermarket?


You can't even formulate a coherent argument, so it's no surprise to find you don't understand words. Anything to avoid the argument, stick your head in the sand and deny your own culpability. You are beyond pathetic.
0 Replies
1
Reply Fri 2 Oct, 2015 06:47 pm
@BillRM,
Oops, you re right. I was thinking of the suicide rate article I read recently (over 40,000/year).
So I guess we should worry more about shooting ourselves rather than some gun nut :-) OTOH, I'm guessing this guy WAS committing suicide.

But whatever - those killed persons weren't alive if we'd called it differently.
1 Reply
2
Reply Sat 3 Oct, 2015 12:04 am
@Walter Hinteler,
Hello Walter, only McGentrix is worried about national pride. What he really cares about is access to guns. God forbid he might be forced to hunt ducks or dear with anything less than a grenade launcher. tsk tsk
1 Reply
4
Reply Sat 3 Oct, 2015 12:15 am
@glitterbag,
I disagree with McGentrix on a lot of stuff, and I presume he, me, but I prefer he not be mocked
0 Replies
-1
Reply Sat 3 Oct, 2015 02:11 am
@BillRM,
I love some of the people on this website as three votes down for daring to show an accurate graph of the US homicide rate for the last 100 years!!!!

I am truly sorry <not> that the overall homicide rate in the US is now one of the lowest it been in a 100 years or so.

Damn facts that does not support the idea that we are overrun with armed mad killers of late unlike the good old days.

As far as schools killings are concern if memory serve me correctly the record of the most killed still happen in the 1920's with the body count of children in the high 20s.
3 Replies
1
Reply Sat 3 Oct, 2015 05:42 am
@BillRM,
Your "all time low" is off the scale compared to other countries. You're like the dumb kid at school overtaken by his classmates who wants a medal for finally being able to read The Cat In The Hat on his own at the age of 17.

Being shot is somehow worst then being knife?

Hmm as a matter of fact the largest lost of life of school children in the US was the result of a bomb not guns and once more so what?
3 Replies