If you call a protest group a hate group because they are tired of being harassed and murdered by racist, trigger happy cops because they are black then you are the one hating, you just are too stupid to know the difference.

They smear your race? My heart bleeds for you. Look in the mirror, you are the one doing the smearing and you're not fooling anyone but yourself.

You are seen clearly for the racist you are.

You are the one trying to give black lives matters a bad name and as long as you keep putting up your racist stink and being part of the problem, black live matters will still have as much relevancy.

I keep reading in the newspapers of another death of an innocent black person almost every day! Yet you want to smear a bunch of non violent protesters.


The black lives matter movement is a result of them trying to Foster the misconception that a disproportionate number of black people are killed by racist police officers in the United States. I think it's about time we put this thread to bed... Let's do the math.

THATS 1.2 TEN THOUSANDTHS OF A PERCENT.

MATH MATTERS
0 Replies
-1
Sun 14 Aug, 2016 05:09 pm
The career Criminal in Milwaukee who was shot by police was shot by a black police officer and contrary to the black Witnesses who claimed the career criminal was shot in the back the police body cameras shows that he was shot while facing the police
officer... shot in the chest and the arm when he refused to drop his gun.

LOOK AT THOSE GODDAMNED THU- oh, that was in Huntington Beach after a surf competition.

Tennessee, 2010. Because Lane Kiffin was no longer going to coach their football team.

Pennsylvania, 2011. Because someone lost their job for ignoring sexual abuse of children.

Lighting a whole bus on fire and destroying people's cars, fighting and shooting guns randomly because a baseball team won the World Series is acceptable.. 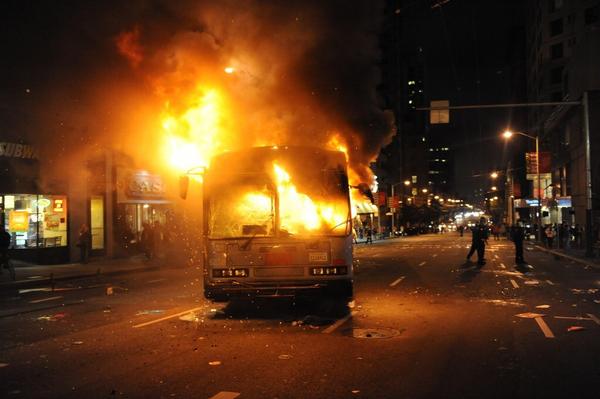 To use your own words John...

Should these violent WHITE protesters (I mean CRIMINALS!) be shot on site? What say you, Mr. GuiJohn?

Is society's crime again these white protesters equal to the crimes WHITES have perpetrated against blacks since the founding of this country?

I would also chant "black power" with "peaceful" black protesters too...

There are really no words to describe your idiocy other than, stupid.

What say you? (asks the Bill O'Reilly clown.)

Being constantly stopped by the police doesn't make him a career criminal it makes him the victim of racist policing. The only person saying he's a criminal is you, and you weren't even there. You discredit the actual witnesses who were. You are a racist, and the only people who will believe your lies are other racists who prefer to live in a fantasy world.
1 Reply
2
Mon 15 Aug, 2016 05:21 am
Missouri man charged with shooting at vehicles, wounding 6
Source: cjonline.com

JOPLIN, Mo. — A southwest Missouri man is charged in two counties after shootings that wounded six people and two dogs in what police believe were random attacks.

Tom S. Mourning II, 26, of Joplin, was charged Saturday in Jasper and Newton counties with multiple counts of armed criminal action, first-degree felony assault and unlawful use of a weapon. He was being held Sunday in lieu of $1 million bond in Jasper County and $300,000 bond in Newton County.

The incident began just after 5 a.m. Saturday when Mourning’s father called police to report shots had been fired in the duplex where he and his son lived.

Officers caught up with Mourning around 5:10 a.m. and were preparing to stop him 14 blocks from his home when he pulled up behind an Immanuel Lutheran Church van at an intersection and started shooting, police said.

Somehow the cops didn't find a need to kill him. He wasn't selling cigarettes or DWB.
1 Reply
-3
Mon 15 Aug, 2016 05:58 am
@TheCobbler,
If ANY person is rioting and committing arson they absolutely should be shot on sight...as a matter of fact in most jurisdictions if somebody is attempting arson especially of a building that is occupied the use of deadly force is always authorized.


But I note with interest that YOU never answered the Question Mr.Cobbler...Does the black criminal arsonist who is torching an occupied gas station deserve a trial or a bullet to his brain?
0 Replies
-2
Mon 15 Aug, 2016 06:07 am
@izzythepush,
izzythepush wrote:

Being constantly stopped by the police doesn't make him a career criminal it makes him the victim of racist policing. The only person saying he's a criminal is you, and you weren't even there. You discredit the actual witnesses who were. You are a racist, and the only people who will believe your lies are other racists who prefer to live in a fantasy world.


You're so full of crap he's got a rap sheet as long as my arm the county sheriff read it aloud it wasn't for traffic stops they were serious offences
And you bet your ass I discredit the "witnesses" who were there...lieing black Witnesses who said the offender was shot in the back by police... Just like the lie about hands up don't shoot in Ferguson which Obama's Department of Justice proved was a lie. Just like the officer's body camera proved that the offender was facing the officer and was shot in the chest and the arm. You're the racist because you attempt to perpetuate the lies simply because the offender is black... Oh and by the way the officer who shot the career Criminal is black... So I guess in your Twisted Viewpoint he must be an Uncle Tom.
1 Reply
-2
Mon 15 Aug, 2016 06:15 am
@bobsal u1553115,
Quote:

Somehow the cops didn't find a need to kill him. He wasn't selling cigarettes or DWB

And you're still so full of crap because the math is not on your side... Police shoot two times more white people then they do black.


Your nonsense consists of a lot of unattributed hearsay from well dubious sources, maths doesn't come into it.
1 Reply
-1
Mon 15 Aug, 2016 07:15 am
@izzythepush,
LOL...no, denying it means that you have math to prove mine wrong... But then maybe you need to have the word math explained to you or maybe you'd better understand if I use the word arithmetic... You see everywhere in the universe 2+2 always equals 4.

But not to you, spreader of isolated nuggets of truth.

Whites represent 70% of the population, so if there were no truly racist intent, shouldn't cops be killing whites over SIX times the number of murdered blacks??????

I already did this math thing with CI. We can spin numbers any direction we want any way we want.


Well I disagree with the term spinning numbers I'm just doing Simple arithmetic here and using the numbers supplied by the leftists.
0 Replies