Forums: History, Ships, Wind, Ship, Water
Email this Topic • Print this Page
1
Reply Sat 18 Jul, 2015 08:34 am
@George,
Things that make you go "HUH!"
0 Replies
1
Reply Sat 18 Jul, 2015 09:59 am
@George,
when schooners were used commercially nd to race was the good old day. When the "Universal Equation" for racing sil was adopted in the early 20th century weve hd some clsses of sail (J BOATS) which carried its jib attached to the boats fore rather than hving a wooden jib pole and these boats carried about half the sail of the old
schooners(about 7500 sq ft.) Today, weve gone entirely to the 12 metre boats (with all the wacky design and bulletproof sails. And all t between 300 nd 4500 sq ft of sail (depending on which part of the Universal equation the designers wanted to weigh heavily).

****-Im using Chrome and I cant seem to download pics like I could with explorer. I may go back but Chrome gives me better record keeping . WAIT , Ill go to a registry nd see if the pic is there. Dont go way

0 Replies
2
Reply Sat 18 Jul, 2015 10:35 am
One of my favorites---I love the lines and as a workboat it has an extremely clean deck. Commonly known as a skipjack it's a traditional fishing boat used on Chesapeake Bay for oyster dredging.

The skipjack is sloop-rigged, with a sharply raked mast and extremely long boom (typically the same length as the deck of the boat). The mainsail is ordinarily triangular, though gaff rigged examples were built. The jib is self-tending and mounted on a bowsprit. This sail plan affords the power needed to pull the dredge, particularly in light winds, while at the same time minimizing the crew required to handle the boat. 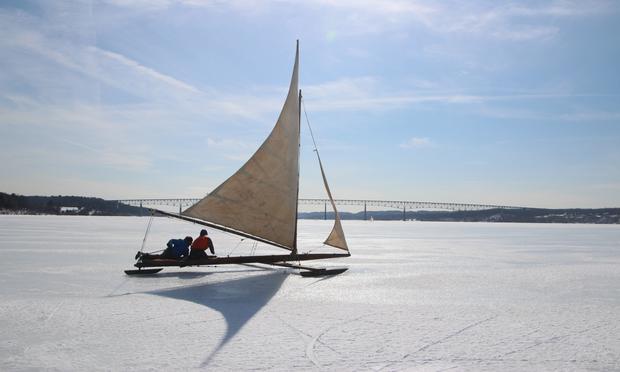 If you've got a hard water problem, what ya need is an ice boat. Long before high speed automobiles were common, these suckers were reaching speeds of or in excess of 100 mile per hour. The highest confirmed speed is 124 knots, 143 miles per hour, near Winnebago, Wisconsin in 1938.
0 Replies
1
Reply Sat 18 Jul, 2015 11:41 am

This schooner, of a type known as a Baltimore clipper, is laying very close-hauled on a wind across the starboard bow. Developed in the 1790s, the Baltimore clippers soon became very popular with privateers and smugglers. They were so successful during the War of 1812 at evading Royal Navy frigates that the frustrated British attempted to take Baltimore itself, beginning with a bombardment of Fr. McHenry. (Rockets red glare, bombs bursting in air, etc. . . .) It didn't work out for them, and wouldn't have helped as the Baltimore clippers were all over the southeast coast by then.

0 Replies
1
Reply Sat 18 Jul, 2015 12:21 pm
I'd learnt sailing on a Bermuda-ketch (which was originally a Kriegsfischkutter ["war fish cutter" = diesel engine 'all-purpose' sailing boat, which should become a fish cutter but became a smaller school sailing boat of the German Federal Navy) Unfortunately (with a different crew!) it got engine troubles when not under sail entering the harbour = stuck deep on a sandbank.
So I got my further training and did the "sailing licence" exam on a normal navy cutter ... and did with that boat the Kiel Week twice That cutter really is good ... with wind. But during calms at the regattas, we often had to use the hand bailer ... for piddling.

During the Kiel week regattas, the boat does a rowing competition as well ... over one nautical mile. [I's never wanted to row a cutter after I had to do during the basic training period as a conscript! the Isle of White

Er, the Isle Of Wight. Have you read any of the Aubrey/Maturin books by Patrick O'Brian? They are said to be very accurate about the minutiae of sailing vessels, which I am not qualified to judge, but they are also damned good stories.

0 Replies
1
Reply Sat 18 Jul, 2015 02:10 pm
I've already taken note of that error.
0 Replies
1
Reply Sat 18 Jul, 2015 02:41 pm
O'Brian's novels are indeed very accurate about ships and their management in the age of sail. It was not minutiae, though, it was the day-to-day workings of the world's most common and important means of commercial transport. For the importance of sea-borne commerce and the strategic contingencies thereby imposed on nations, see Alfred Thayer Mahan, The Influence of Sea Power upon History, 1660-1783, Boston, 1890. That work had a profound influence--not necessarily for the better--upon the European powers, especially the German Empire and its loony Kaiser.

In fact, looking at the cover of The Mauritius Command was, in part responsible for this thread (there were other inspirations, too). 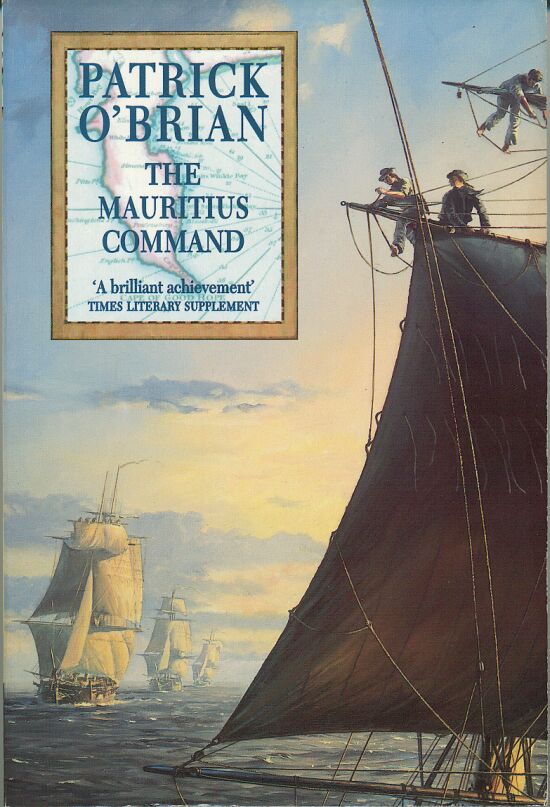 The ships are sailing in line ahead. Each ship must keep station two cable lengths (about 400 yards) from the ship ahead in line, and all ships form on the pendant ship. O'Brian, as he does in other works, explains how some ships are constantly flashing out sails and taking them, to keep station with the slower vessels, and how the slower vessels were carrying all the sail they were able to carry, even though that often pressed down the ship by the bows, and actually slowed her down.

If you (and your subordinate captains) were really good, you'd form line a head with an interval of just one cable length--200 yards.

And **** this web site and its goofy editing rules.
0 Replies
1
Reply Sat 18 Jul, 2015 04:59 pm
This is the Victory Chimes (named a national landmark), the three-masted schooner I was on when we sailed off the coast of Maine. It was on this ship that I came to love sailing--the wind, the water, the sky:

The French ship L'Hermione is a replica of General Lafayette's 18th century
ship that carried him to the United States from France to announce his
country's support in the fight for independence.

I'm still kicking myself that I missed her visit to Boston.

Rap
2 Replies
1
Reply Mon 20 Jul, 2015 09:28 pm
@raprap,
how does it work? Ive seen the Japanese version but its masts are more traditiona, except for the venetian blinds .
2 Replies