How did Albuquerque become the largest city in New Mexico?

Forums: History, Geography, New Mexico, Albuquerque
Email this Topic • Print this Page
Reply Thu 6 Nov, 2014 12:59 pm
Is there any geographical or political reason why Albuquerque grew to be the largest city in New Mexico? In particular, how did Albuquerque catch up to Santa Fe, despite Santa Fe's sizable head start?
Type: Question • Score: 8 • Views: 4,445 • Replies: 36
3
Reply Thu 6 Nov, 2014 01:42 pm
@lodoband,
It is near the Rio Grande, it is in the middle of the state where it isn't as cold as the north or as hot as the south. It is surrounded by mountains and mesas, meaning much of the scarce rainfall in NM finds a way to the Rio Grande for farm and livestock irrigation and drinking water.

Route 66 passes through the middle of it, as do several interstate highways that transport goods between east and west U.S.

http://en.m.wikipedia.org/wiki/Albuquerque,_New_Mexico
1 Reply
1
Reply Thu 6 Nov, 2014 03:35 pm
@Butrflynet,
Having spent time at Sandia, Id sy that it ws the Mnhttan project. The old bomber schools were located at the Ab Army AP. and then in 1941 the mahattan project hd a lot of need for the specific talents that stuck with the Labs into the future.
The population of scientists, engineers, military nd service groups grew in the area and stuck.

Thanks to the Atomic Bomb, Ab grew fairly quickly and biggly
2 Replies
3
Reply Thu 6 Nov, 2014 04:18 pm
@lodoband,
Albuquerque's population grew due ... to a German: Franz Huning, a German immigrant and trader, settled in Albuquerque and opened a store on the plaza. His family went on to become very prominent and instrumental in establishing Albuquerque’s railroad terminal in 1880, making the city a premier stop on its line.
And at that time, Albuquerque surpassed Santa Fe as a commercial and population hub. Afterwards, matters ran their course ...
2 Replies
1
Reply Thu 6 Nov, 2014 04:47 pm
@Walter Hinteler,
There were only about 8K people in AB in 1900. You can see the biggest growth occurred during and after WWII

Id say that AB had a better Airport space than Santa Fe . Even with that damnned "watermelon"
0 Replies
1
Reply Thu 6 Nov, 2014 07:10 pm
@Walter Hinteler,
Dead on with Huning. There were several other major town boosters at the time.

There was a major rail center planned for Bernalillo by the AT&SF railroad, who thought they would get land at ~.50 per acre. The land was owned by the Perea family, who counter offered some amount hundreds of times more. The rail center moved to Albuquerque.

There were only about 8K people in AB in 1900. You can see the biggest growth occurred during and after WWII
Quote:

It had been already the largest city in New Mexico at around 1900.


I got different numbers: 1 Reply
1
Reply Fri 7 Nov, 2014 10:02 am
@roger,
So was Albuquerque a major intersection point for the AT&SF railroad? This old map (1891) I found on wikipedia makes it look like the track splits one stop past Albuquerque: 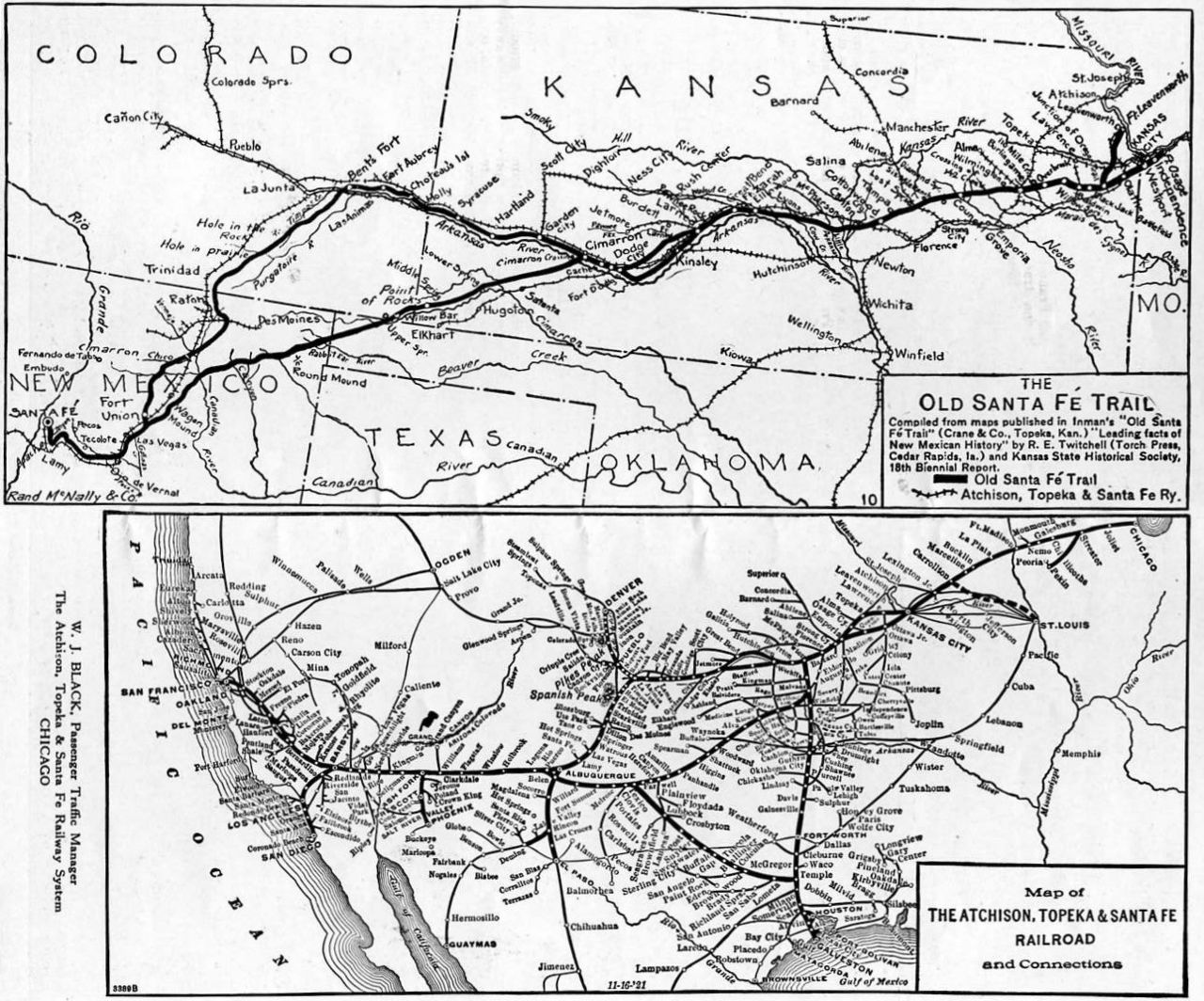 1 Reply
2
Reply Fri 7 Nov, 2014 10:10 am
@lodoband,
Albuquerque was designated as the division point between the AT&SF railway and the Atlantic and Pacific Railroad.

Celebration in Albuquerque noting the commencement of construction of the Western Division of the Atlantic and Pacific Railroad, driving westward from Isleta.


Images and historical background on the Albuquerque Rail Yards >HERE<
1 Reply
1
Reply Fri 7 Nov, 2014 10:36 am
@Walter Hinteler,
By the way: in March of 2015 the Albuquerque Museum will unveil and open to the public the Only in Albuquerque history gallery, including "an interactive, engaging, fun-filled presentation of the history and culture of the central Rio Grande Valley" (and that includes a print I own

Albuquerque’s fort and federal garrison came under attack at the outbreak of the American Civil War, when the territory suffered minor Confederate cavalry raids. In the winter of 1862, Confederate soldiers led by Gen. H.H. Sibley captured the town and held it until March, when Union forces arrived. In the years following the war, New Mexico Territory experienced the rise of an important livestock industry, with cattle ranchers and sheepherders bringing livestock and other animals into the area. Faced with the need to drive their herds hundreds of miles overland to market, the livestock producers lobbied for a freight railroad in the 1870s. Several regional lines finally extended to the city by 1880.

Albuquerque’s Old Town had lost importance by the late 19th century, when the railroad depot was built 2 miles (3 km) away, closer to the city’s present government centre. In the following years, Albuquerque appeared to be two cities in one—the Spanish Old Town, with its small buildings and winding lanes, and a sprawling American city.

Albuquerque became a major regional transportation centre, with rail lines serving as important instruments of economic growth. The territory’s population grew with the arrival of workers and immigrants, and Albuquerque was incorporated as a town in 1885. By 1891 the town had become a city. By 1918 thousands of “health seekers”—mostly victims of tuberculosis and other pulmonary diseases—had flocked to Albuquerque, which was served by several hospitals built by the federal government.

Newcomers to Albuquerque soon displaced the hidalgos, or noblemen, of the Spanish past to form a mostly “white” business elite, made up of merchants, bankers, and ranchers. With the rise of this new elite by the start of World War I, Albuquerque emerged as a conservative, Republican-dominated political centre that exercised broad influence on both New Mexico and the neighbouring regions of eastern Arizona and western Texas. Among the first acts of the new Republican majority was the institution of the city manager form of government in 1917, an innovation that broke the power of the predominantly Democratic ward bosses and their Hispanic constituencies.

The U.S. government’s presence increased in the 1930s, when more than a hundred federal agencies established offices in the city. The federal mark on the city grew even stronger after World War II, when the government chose Albuquerque as the site for the Sandia Complex (now Sandia National Laboratories), a diverse group of industrial facilities, military bases, laboratories, and offices, which earned the city the nickname “Little Washington.” Kirtland Air Force Base, established in 1942 as Kirtland Army Air Field, developed as an important testing ground for various weapons (some nuclear), while Albuquerque became a processing centre for stores of uranium mined on the nearby Colorado Plateau. During the Cold War period, Albuquerque was considered a strike target in the event of nuclear war with the Soviet Union.

At the end of the Cold War, Albuquerque’s economy began to diversify, especially in the development of solar energy systems and computer equipment. Even so, it remains heavily dependent on federal and military expenditures. The city’s explosive postwar growth—from a population of 35,449 in 1940 to more than 500,000 by the turn of the 21st century—mirrored that of the entire Southwest, and it did not slow down in the first decade of the 21st century.