I wish the US would stop being Israel "friend" until all these wrongs are put to rights.

"... commitment to assist the Palestinian's is establishing an economically viable state ..."? That goal is the responsibility of Israel? In what Alice In Wonderland is Israel?

Ever heard of the concept of 'win-win', Foof? Life is not a zero-sum game.

Now, think of an out-of-the-box for a win-win solution

See uf you like any of these innovative Middle East solutions:

1. The one-state scenario: not really a 'solution', just a perpetuation of the status quo but with progressively better status for the natives. Call that the 'American model', cause that's what happened in the Americas. A win-win because nobody loses much as compared to now; they just lose their respective nationalistic dreams to accommodate reality.

2. The 3 states scenario: Gaza and West Bank choose to part. No need for a corridor linking the two, no need for any reconciliation between Hamas and the PA who are free to pursue divergeant policies... Israel divides its enemies further. I call that a win-win.

3. The second holocaust scenario: the IDF carpet bombs the pals for a year or two, while allowing refugees to flee. Elimination of the Palestinian population in Palestine. The Palestinians lose only a life of constant humiliation. The Israelis can proudly boast that their country was founded on not ONE but TWO holocausts. Win-win.

4. The nuclear scenario: Iran makes their A bombs, use a couple of them on Jerusalem and Tel Aviv. Israel retaliates with a few dozens of their own nukes. It looks like a lose-lose but the world gets to see two major ME bullies taking each other out. Win-win for the rest of the world.

Should I go on?

THERE IS CAPITAL IN SUPPORTING ISRAEL.

If it were not for the brain washing of the LIBERAL MEDIA it wouldent be. And no CI I am not serious. There is no liberal media. There are some liberal writers because I see one once a week in the ultra conservative paper in my town between the 7 days of conservative writers. Thats why I have a computer in order to find my own facts instead of the pap this newspaper feeds the crowd around here.
0 Replies
4
Reply Mon 28 Jul, 2014 07:23 pm
@oralloy,
Oralboy it takes a lot of balls for a lying prick like you to accuse anyone else of lying.
0 Replies
0
Reply Mon 28 Jul, 2014 08:26 pm
Some hate Oliver

5. Qatari imam prays about the Jews: “Count them one by one, and kill them to the very last one.”

delivered a Friday sermon on Qatar TV on July 18,

Oh, Allah increase the pressure You exert upon the plundering Jews. Demonstrate upon them the miracles of Your might, for they are no match to You. Count them one by one, and kill them to the very last one. Do not spare a single one of them. Oh Allah, disperse them. Oh Lord, freeze the blood in their veins. Oh Allah, tear them asunder. Oh Allah, sow discord in their hearts. Oh Allah, do not let them prevail. Make an example of them for their allies. Oh Allah, bring down the planes of their air force, burn their infantry and sink the ships of their navy.

4. Berlin imam: “Oh Allah, destroy the Zionist Jews…. Count them and kill them to the very last one.”

Oh Allah, destroy the Zionist Jews. They are no challenge for you. Count them and kill them to the very last one. Don’t spare a single one of them. Shake the ground beneath their feet. Make them suffer terribly. Deflect their bullets. Disperse them. They behave tyrannically all over the world and spread corruption. Oh Lord, bring torment upon them.

3. Iran’s Supreme Leader: The “only solution” is Israel’s “destruction”

As said by Imam Khomeini, Israel must be destroyed.… However, until that time with the help of Allah for this cruel and murderous regime to be destroyed, strong confrontation with steadfast armed resistance is the only solution against this destructive regime.

2 Replies
3
Reply Mon 28 Jul, 2014 09:07 pm
@buttflake,
I could pick and choose from dozens of Jews or Israel supporters who have said that all Arabs must be killed... Hatred is unfortunately a widely shared trait of the human race.

Hatred is unfortunately a widely shared trait of the human race.

That hate is widely shared in the Islamic doctrine. Are your names helping you figure out where the real hate is coming from yet? Doesn't look like it.

Are your names helping you figure out where the real hate is coming from yet?

Hatred is a slippery slope, if you ask me. You start by hating your enemy and you end up hating everybody... Hatred in Israel goes beyond Arabs now. Once in a while a punk also says there that Hitler should have killed more Jews (and by that they mean the pacifist Jews of course). And Hamas of course primarily victimises its own population...

It's a very freeing precept, I find. Maybe you could try it one day...

Some people don't have that luxury, as the stare reality in the face. You should take a look at it.
1 Reply
3
Reply Mon 28 Jul, 2014 09:49 pm
@buttflake,
That's an excuse, more often than not. I have been in war zones and can assure you that some people LOVE to hate, and will make any excuse to do so. They will hate in peace and they will hate in war. Other people, even in the midst of war, would resist hating the enemy in bulk. Even among Palestinians, there are many who don't hate Israelis. These are the kind of people who can make peace happen. Evidently, you're not one of them.
0 Replies
0
Reply Tue 29 Jul, 2014 10:40 am
Quote:

IRELAND: Israeli Embassy outrages Muslims and Leftist sympathizers with campaign that warns “You’ll be next! One of the comments:

a statement of fact. Already happening in London and Madrid. If progressives and muslims are "outraged " then it must be truth. Outrage is only their attempt to edit recent history.

The United Nations Relief & Works Agency For Palestine Refugees (UNRWA) announced Tuesday that another rocket stockpile has been found at one of its schools in Gaza. This instance marks the third time since the beginning of Operation Protective Edge that a weapons arsenal has been found at an UNRWA school in Gaza.

UNRWA has yet to place blame on any individuals or organizations for placing the weapons stockpile within a children’s school. The UN body refused to do so on the past two previous occasions as well.

Who are the suspects. Let's see, Hamas and Hamas.

Here's some company 4ya 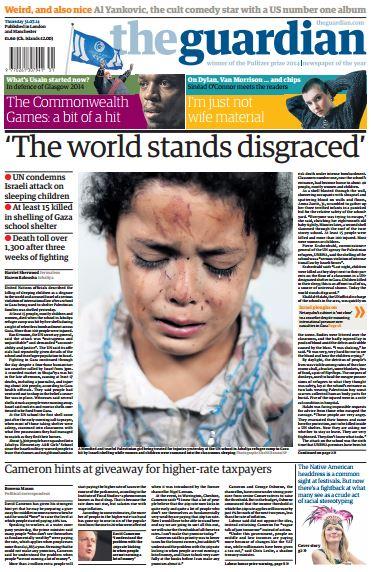 Here's some company 4ya

Nothing from the Guardian is of any factual good.
1 Reply
3
Reply Wed 30 Jul, 2014 07:42 pm
@buttflake,
Not in your pathetically narrow goodies-vs-baddies-I-picked-a-side-and-I'm-sticking-to-it world view.

Are you saying information from the Palestinians is reliable? I have no problem believing the PM. Israel has no reason to lie, they are not the aggressors.

Wow. You are dumb cardboard cutout aren't you?

When israel's PM accuses the Palestinians of using the most telegenic corpses to make Israel look bad that's a major shark jump.