Can anyone verify the historical authenticity of this photo? Has anyone seen this photograph (or other's like it) outside its Awkward Family Photo context? Was this a protomeme at the time? 1950's (or later) family vacations to watch nuclear bomb tests? Do you think it's been photoshopped (or whatever process one could have used to fake the photo before Photoshop existed)?

Plus the fact he only has two stripes, so wouldn't have the security clearance to be anywhere near it.


You missing that he has 3 stripes and two bars. That's a Sergeant First Class insignia. In that case the photo just might be genuine then. Maybe they quickly snuck off and hid in a fridge, like Indiana Jones.
0 Replies
3
Reply Wed 2 Jul, 2014 02:53 pm
1955 Summer vacation in Nevada?

That shirt looks like a cub scout shirt my brother used to have.

Not saying it's impossible for both clouds to be from the same nuclear test, just that it's unlikely two photographs, taken at different distances and presumably at different times, would depict the same mushroom cloud. Also, the mountains and terrain look different, and frankly it's unlikely that the kids and the photographer could have gotten that close to a nuclear test or that the camera (not to mention the kids and the photographer) would have survived (maybe the film developed itself).

But I still say that kid looks funny.
1 Reply
1
Reply Wed 2 Jul, 2014 03:11 pm
@Lordyaswas,
Actually, security clearance isn't based on rank. I worked with nuclear weapons in the USAF back in the fifties, and I had a Top Secret Clearance when I left basic training.
2 Replies
1
Reply Wed 2 Jul, 2014 03:14 pm
@cicerone imposter,
With every post, I'm beginning to believe this photo more and more.

0 Replies
1
Reply Wed 2 Jul, 2014 03:26 pm
@cicerone imposter,
Yep! I worked at the Signal Corps school at Ft. Gordon for a year or so. Students were leaving with Top Secret/Crypto before they were able to vote. Still, the kid in the photo does look a scoshie bit young for the stripes.
0 Replies
1
Reply Wed 2 Jul, 2014 03:29 pm
@Ragman,
Ragman wrote:

2 stripes in USAF is an Airman First, Class


Two stripes in the USAF is an Airman Second Class.

Appears they have changed it. 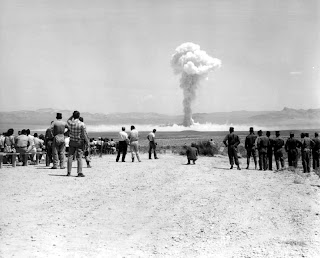 Left: A nuclear explosion at the Nevada Test Site in the 1950s. The people on the right are military personnel, part of the Government's Human Radiation Exposure project. This photograph was at one time classified. (Photo courtesy of National Nuclear Security Administration, U.S. Dept of Energy).

The sound of the largest man-made explosion: A cinematographer films an atomic mushroom cloud on July 19, 1957 in Yucca Flat, Colorado

They're the closest images I could find and they're not very similar. I'm thinking hoax.

Has anyone seen this photograph (or other's like it) outside its Awkward Family Photo context?

The mushroom cloud is from the first test of an atomic artillery shell.

Was this a protomeme at the time?

Not that I've ever heard.

No way it's real. If the military allowed civilians to observe a test, they would have been under military control and not just "off on their own".

And if the military invited any civilians to observe tests, it would not have been as some kind of vacation package.

Do you think it's been photoshopped (or whatever process one could have used to fake the photo before Photoshop existed)?