Can anyone verify the historical authenticity of this photo?

Forums: History, Photoshop, Photography, Nuclear Weapons, Historical Photography
Email this Topic • Print this Page
2
Reply Thu 3 Jul, 2014 10:48 am
@joefromchicago,
Yea, it's so obvious! The kids shadows goes one way, and the tree has no shadow at all!
1 Reply
2
Reply Thu 3 Jul, 2014 11:02 am
@cicerone imposter,
Well, I was specifically referring to the obvious deletion of the nuclear blast in the distance. Probably done by a concerned family member who wanted to delete any reminder of the blast that caused little Timmy to grow up to become a grotesquely mis-shapen homunculus.
0 Replies
1
Reply Fri 4 Jul, 2014 07:13 am
@joefromchicago,
This pick proves the picture in question is photoshopped. Some of the dust is missing. Doubtful both shots from different angles are identical. Background different.
0 Replies
1
Reply Fri 4 Jul, 2014 07:15 am
@timur,
I think the little boy is Lou Holtz.
0 Replies
1
Reply Sat 5 Jul, 2014 09:37 pm
I would suggest sending a note to these people:

They are the La Vegas atomic testing museum and all days tours are run out of there to the former atom testing site.

If anyone would know about that picture they would and they are a very freindly group of people.

I suspect that the shock wave would already have hit them. Looks like BS to me.


Given the amount of time for the mushroom to get to that stage, a few seconds, the photographer would be blind from the initial flash, and I would expect all their clothes to be on fire.

Has anyone seen this photograph (or other's like it)

There's a famous photo of civilians observing the Operation Greenhouse "Dog" atomic blast in 1951, seated in Adirondack chairs and protected (cough) by dark goggles. This one is definitely not fake. 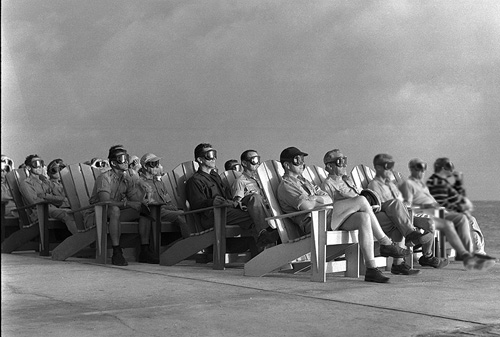 Children and family members? I doubt the government clearly didn't give them security clearance to witness such top secret military events.
1 Reply
3
Reply Tue 18 Aug, 2015 02:16 pm
@tsarstepan,
There was an effort in the early 1950's to try to reverse the trend of having the public be afraid of the effects of nuclear weapons. The reason is clear and well documented: Military strategists wanted to ensure that there would be few if any restrictions on their use, even on American soil. They came up with scenarios such as an enemy attack in the American West with tanks rolling through California, which they'd like to repel with a tactical/battlefield nuclear weapon. Thus it was in their interest to show that civilians could live and thrive just a few miles from the blast zone. They did indeed bring in large numbers of civilian observers, including the press, as well as a full compliment of military staff. No, there weren't children freely roaming as in the fake photo at the start of this question, but not only were the non-military VIP observers in the Adirondack chairs real, there were also military observers placed even closer including directly under some of the bombs, in order to "prove" the survivability. Contrary to your assertion, these weren't "top secret military events" at this point, there was a massive public relations campaign going on, and an estimated 200,000 observers, both military and civilian, were brought in to see the show. This estimate comes from the U.S. Government National Institutes of Health:
http://www.ncbi.nlm.nih.gov/books/NBK225000/
Military observers directly underneath an exploding nuke were documented in this video, you can read more about it in the National Public Radio story at this link:
http://www.npr.org/sections/krulwich/2012/07/16/156851175/five-men-agree-to-stand-directly-under-an-exploding-nuclear-bomb

The larger military program of showing how "survivable" nuclear explosion regions are is covered in this government film:

0 Replies
3
Reply Fri 4 Sep, 2015 09:36 am
I found some more legitimate photos of casual observers of nuclear mushroom clouds. The entire city of Las Vegas, Nevada was close enough to the above-ground Nevada nuclear bomb tests to observe the clouds, such as this one in 1957: After the first nuclear device was detonated at the Nevada Test Site on this day, Jan. 27, in 1951, atomic fever swept across the nation, bringing waves of visitors to Las Vegas, an ideal vantage point from which to see the clouds rising above the test site 65 mi. away.

http://time.com/3676511/nevada-nuclear-test/
The popularity of "atomic tourism" is described here by the Public Broadcasting Service (PBS)
http://www.pbs.org/wgbh/amex/lasvegas/peopleevents/e_atomictourism.html
An actual photograph including a child observing an atomic mushroom cloud in Las Vegas: and a family observing the "nuclear dawn"