Getting Ready For the Fourth Palestinian Rejection

I was 19 in 1967 when I saw the newspaper headlines- "IT'S WAR IN THE MIDDLE EAST!" as Israeli tanks (many supplied by America) rolled into Palestine, and I remember thinking "Is Israel allowed to do that? Is it legal?"

Of course it is legal for Jews to defend themselves when people attack them.

It was all over within a few days and became known as the "Six-Day War", but the Palestinians and the muslim world don't see it that way and regard the war as still ongoing for the 47 years right up to the present day.
They've got a point and I can't see any prospect of peace til Israel gets out of Palestine.

If the Palestinians refuse to make peace, they will be packed up in buses and transported to Gaza.
0 Replies
-2
Reply Mon 10 Mar, 2014 05:46 am
@Romeo Fabulini,
Romeo Fabulini wrote:

Not really. The trouble started when Muslims started pretending that if they steal other people's land, it somehow becomes Muslim land.

Sounds a bit cheeky to me, no wonder the muslims were miffed and started sporadically shelling and sniping at Israel.

Advocate said: Israel has a 5,000 year history in that little piece of the ME. That piece is hardly Muslim land

Tell the muslims that!

Why don't the great American people start saying "Why the hell are we propping up Israel? What has Israel ever done for us?"

Because we are happy to support Israel.

Why did the muslims hit America with 9/11?

Because they want to conquer the world, commit genocide against all non-Muslims, and create a global Islamic dictatorship where it would be a capital crime for a woman to learn how to read.

When the muslim world gets its hands on backpack-nukes it'll really hit the fan, Saddam spelt it out-
"Does America realize the meaning of every Iraqi becoming a missile that can cross to countries and cities?" -Saddam Hussein, September 29, 1994

That's why America should start falling away from Israel NOW because Israel is bristling with nukes and well able to defend herself anyway, she certainly doesn't need American help in that respect!
And a split from America would benefit Israel too, because Israel will have a free hand to do as she pleases without Washington's interference..

Neither the US nor Russia is going to supply Muslims with backpack nukes. And no one else has carried out the nuclear tests that are necessary to be capable of making them.

The Palestinians were a neighboring people. They were part of the same Canaanite population during the Bronze Age. But during the Iron Age, when the Israelites lived in the West Bank area, the Palestinians instead lived in one of the kingdoms that bordered Israel. They were Edomites or Moabites, or something similar to that.

The Zionist, and their enablers, namely the US and Europe, have yet to learn that peace will never be achieved by violating the Palestinian peoples’ rights to Palestine.

If the Palestinians refuse to accept 1967 borders, they will be packed up in buses and driven to Gaza.

The Palestinians lived throughout Palestine, your simplistic distiction between them and "Israelites" notwithstanding.

Just because science and history prove you wrong, that does not justify referring to them as simplistic.

The Palestinians are the decendants of the "Israelites"

Where is this "genetic science" of yours, other than in the figments of your imagination?

Same place as the last several times I've linked it for you.
1 Reply
0
Reply Tue 11 Mar, 2014 10:11 pm
@InfraBlue,
There is plenty of genetic evidence that Muslims are severely inbred. And has anyone asked you why the Palestinians refuse to recognize a Jewish state? 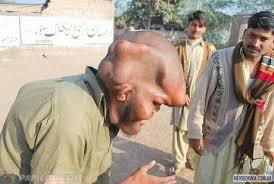 0 Replies
1
Reply Wed 12 Mar, 2014 01:33 pm
@oralloy,
Oh yeah, maxdancona's article that you cited which you proceeded to completely ignore and instead write your flights of fancy.

Bingo! The first Christians were Jews and the bible states Abraham's first son was Ishmael who was blessed to become a leader of a great nation, that of Islam.

I'm an unbelievable in gods but a lot of knowledge may be found in the Bible for the Old Testament was written by many ancients.....the New Testament, well, many people who wrote about Jesus did not live during the life of this Christian prophet. As you so eloquently put it, InfraBlue, all these people descended from the same source in Caanan, i.e., "the ancient peoples of Palestine" which consisted of many tribes, yet they were all Palestinians from the land of Palestine. For some to say there is no such people as Palestinians, then they must also include the descendants of the Hebrews. It is said Palestinians have more of the ancient Jewish DNA in them than the European Jews.
2 Replies
0
Reply Wed 12 Mar, 2014 07:21 pm
@Moment-in-Time,
Quote:

yet they were all Palestinians from the land of Palestine

There never was, and still is not a Palestine.

But you could answer these questions

Oh yeah, maxdancona's article that you cited which you proceeded to completely ignore and instead write your flights of fancy.
That dog won't hunt.

For some to say there is no such people as Palestinians, then they must also include the descendants of the Hebrews.

Better to merely say that the Palestinians were a neighboring Iron Age culture -- perhaps Ammon or Moab or Edom (or maybe the Phoenicians).

It is said Palestinians have more of the ancient Jewish DNA in them than the European Jews.

Only dishonest people who make up fraudulent claims would ever say such nonsense.
1 Reply
0
Reply Wed 12 Mar, 2014 08:57 pm
@oralloy,
Quote:

Only dishonest people who make up fraudulent claims would ever say such nonsense.

Oh yeah, maxdancona's article that you cited which you proceeded to completely ignore and instead write your flights of fancy.
That dog won't hunt.


Yes I can. You said, "genetic science shows that the Palestinians were a separate population from the Israelite culture. Therefore the Palestinians lived somewhere else." Like I said yours are flights of fancy that completely ignore the article you cite.
1 Reply
-1
Reply Wed 12 Mar, 2014 09:28 pm
@InfraBlue,
InfraBlue wrote:

Your cite is a case where all my words fully comply with everything that the study says.

The study shows that the Palestinians and Israelis separated in the Bronze Age.

That means that during the subsequent Iron Age, they were two separate cultures.

The Israelites were an Iron Age culture.

Like I said yours are flights of fancy that completely ignore the article you cite.

But the reality is, everything I say is grounded in science and fully complies with the article in question.
1 Reply
2
Reply Wed 12 Mar, 2014 10:44 pm
@oralloy,
Point out exactly where the article states that "the Palestinians and Israelis separated in the Bronze Age." Point out where the article even mentions "Israelites" and "the Iron Age."
1 Reply