Forums: History, Civil War, Treason, Robert E Lee
Email this Topic • Print this Page
Reply Wed 22 Jan, 2014 04:45 pm
I've been discussing this with several friends since his birthday. I contend that he was a guilty of treason. One friend challenged this assertion using this argument:

I decided this was something I would like to ask the learned participants of this forum. I've been lurking here for awhile and really enjoy the quality of discussion.
Type: Question • Score: 10 • Views: 16,611 • Replies: 220
View best answer, chosen by Benson-In-A-Box

2
Reply Wed 22 Jan, 2014 04:48 pm
The Confederate states were in illegal rebellion against the lawful authority of the United States Government. REL was a traitor.

0 Replies
4
Reply Wed 22 Jan, 2014 05:09 pm
If one were to assert that taking up arms against his country were treason, then certainly he was a traitor. How do you claim this is true: "His allegiance to the Confederacy negated his citizenship to the USA" ? Article One, Section Ten lists powers and actions forbidden to the states. Forming a confederacy is one of the actions prohibited to the states. Maintaining troops and/or ships of war in time of peace is another.

Personally, i don't find the question all that interesting. President Johnson was wise enough to forbear bringing charges of treason against those who took up arms against the United States, which i consider to have been the balance of wisdom. I know that some people have claimed that he had discussed this with Lincoln before the latter was assassinated. I don't consider myself enough of a scholar to comment on that, but i do suspect a good deal of the resentment in Congress against Johnson (from the radicals--the Republican extremists) was a result of his not having pursued such prosecutions.

Lee was a rather normal man of his day, until that war. He really became a weird duck after the war began. It seemed to have unhinged him in certain respects. He would not refer to "Yankees," or United States troops, but he would usually just refer to "those people over there." He also referred to officers in the Confederate service by their commissioned rank, but referred to Federal officers by the rank they had held before the war. As an example, a chaplain rode up to Lee's makeshift headquarters in the woods to breathlessly report that Federal troops were advancing on his flank. Lee replied that he had just sent Major General McLaws to call upon Major Sedgwick (who held a commission as Major General, but who had been a Major at the time that Lee resigned). I also believe that he was attempting to commit suicide by combat during the Wilderness campaign when, having learned that Longstreet was wounded, he attempted to ride to the firing line with the advancing Texans. NCOs of the Texas Brigade had to take the reins and tack of his horse and lead him to the rear.

Lee is a fascinating subject, but i don't think this question is of much interest.
4 Replies
0
Reply Wed 22 Jan, 2014 05:13 pm
A traitor is somebody who harms his own country, but when the South seceded, it became a "country" in its own right and Lee was a "national" of that country and harmed it in no way..

1 Reply
2
Reply Wed 22 Jan, 2014 05:51 pm
@Setanta,
Thank you for taking the time to give me such a thorough answer.
1 Reply
2
Reply Wed 22 Jan, 2014 05:53 pm
@Benson-In-A-Box,
You're welcome. A thorough study of Lee, one which avoids the hagiography, would be an interesting study for you. Recent biographies have been interesting to me.
1 Reply
3
Reply Wed 22 Jan, 2014 06:10 pm
@Setanta,
I think you're being a little too harsh on ol' Robert E., Set. It was quite common at the time to feel that one's first obligation was to his State. The whole concept of the United States as a Federation, somehow superior to the individual State, had never been a comfortable one with people in either section of the country. (New Hampshire was, historically, the first state to threaten secession; at the time this seemed a perfectly reasonable choice.)

Lee stayed loyal to the Union long after the Carolinas and Alabama and Mississippi etc,. had already announced they were no longer members of the United States In fact, he ran into some hostility in Texas, where he was stationed at the time, when he refused to doff his Federal uniform and peacefully turn his post over to the Texas rbels. (Incidentally, he was a Colonel or Lt. Col. in the US Army at the time [too lazy to look it up now] and throughout his service to the Confederacy never wore anything but a Colonel's insignia o his uniform. That had been his Federal rank. It's a partial explanation, at least, of why he referred to other Federal officers by their peacetime ranks.)

He was offered command of the Army of the Potomac by President Lincoln long before McClellan was even considered for the post. Eery indication is that he was seriously considering accepting the offer when his native state of Virginia finally seceded. Lee felt he had no choice, no options. He was, in his own mind, first of all a Virginian.

There was nothing unusual about this sort of sentiment. Before the War, it was common to use the expression "the United States are ...[etc.]" It wasn't til after the War that that expression changed to "the United States is..." Back in the 1850s and 1860s very few people thought of the USA as one country, singular. Don't frget that prior to the adoption of the Constitution, the country had been run under the Articles of Confederation.

Robert E. Lee: A Biography by Emory M. Thomas is a good read, and avoids the hagiography. Clouds of Glory: The Life and Legend of Robert E. Lee by Michael Korda got good reviews, but i suspect that that was both because of Korda's reputation and because he ends up re-affirming the hagiography. Nevertheless, you might enjoy it--Korda is a good writer.
1 Reply
3
Reply Thu 23 Jan, 2014 07:50 am
@Setanta,
Duly noted on feeding the resident troll.

Setanta said: Romeo..is a troll from England who knows nothing about American history

You gotta be jivin us boy..

I'm a 65-year old wargaming champ under my fighting name of 'Poor Old Spike' and was a big shot at the FGM wargaming/military history club!
We gamers don't just talk mil history, we're in there walking the walk alongside the blues and the grays on the cyber battlefield!

0 Replies
3
Reply Thu 23 Jan, 2014 09:32 am
@Setanta,
Given that George Washington could be consider guilty of treason also for the same reasons it seems kind of a silly position to take.

Lee have valid case of divide loyally and he decided to go with his state instead of the US as a whole and name calling or second guessing seems kind of pointless.

Benson said: @RF- I'm not sure if you're serious, given the smiley at the end of the post. I'm from Alabama, where this sentiment is fairly common

Yeehaw, you're a good ole boy..

I got friends in the deep south who made me an honorary member of their forum because they like my christian patriotic views..

Hey Shane waddya say to anybody who calls Lee a traitor?

"They're a low down lying yankee!"

0 Replies
2
Reply Thu 23 Jan, 2014 12:06 pm
By the way, Benson, in line with Lee referring to Federal officers by their rank in "the Old Army" (as it was called on both sides), he also wore the rank insignia of his own rank in the Old Army. Below, will see that he wears three stars on his lapel--that was the rank insignia of a Colonel in Confederate service, not of a general officer. 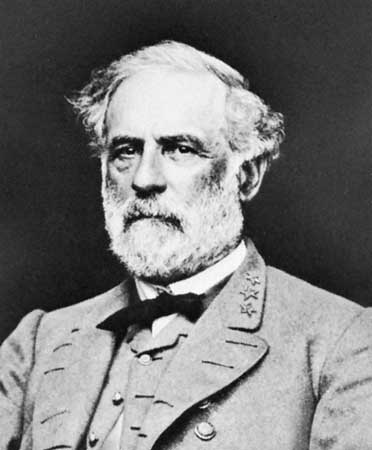 1 Reply
2
Reply Thu 23 Jan, 2014 02:09 pm
Dear Mr. Setanta may I post bail for Spike and confirm that he is a legend amongst select RPG aficionados. Despite his excitable countenance I do believe him to be a fungi.

Why, he even writes poetry…

Through every nook and every cranny
The wind blew in on poor old Granny
Around her knees, into each ear
(And up nose as well, I fear)

Lee felt he had no choice, no options. He was, in his own mind, first of all a Virginian.

There was nothing unusual about this sort of sentiment.

It doesn't matter that Lee shared his mistaken beliefs with a bunch of other people. That just means that everyone else who thought the same way was also a traitor. And there were plenty of southerners who decided that they wouldn't betray their country by joining the rebellion, such as George Thomas and Montgomery Meigs.
2 Replies