You don't know that all of those flights happened without incident.

Who said that or even imply that as a matter of fact if memory serve me correctly one nuke ended up off shore of the US somewhere and to this day have not been found.

Still to make a big deal of flying one nuke across country when hundreds use to be airborne at any given time is silly in my opinion.
2 Replies
-1
Reply Sun 22 Sep, 2013 04:32 am
@Setanta,
It shows that, despite their protestations to the contrary, certain posters would rather live in a fool's paradise than contemplate what could have actually happened. Cuban missile crisis aside, it looks like all the times an explosion was likely were down to accidents. US, UK and the Soviets have all had their moments, and I bet the other nuclear powers have too.

When Obama said he wanted to reduce the world's stockpile of nuclear weapons he would have had some idea of the frequency of near accidents. None of us really know the true picture.
0 Replies
-1
Reply Sun 22 Sep, 2013 04:36 am
@BillRM,
BillRM wrote:

Still to make a big deal of flying one nuke across country when hundreds use to be airborne at any given time is silly in my opinion.


So are you saying this story should not have been printed? It's hardly that big a deal when a story about Godfrey Bloom hitting Michael Crick over the head with a brochure attracts about ten times as many column inches.
0 Replies
2
Reply Sun 22 Sep, 2013 04:43 am
@BillRM,
Whether it was a functioning nuclear bomb or one with out it core in place remain an open question to this day. 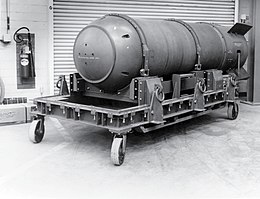 A Mk 15 nuclear bomb of the type lost during the accident.
Accident summary
Date February 5, 1958
Summary Mid-air collision
Site Tybee Island, Georgia, United States
32°0′N 80°51′WCoordinates: 32°0′N 80°51′W
First aircraft
Type Boeing B-47
Operator United States Air Force
Registration 51-2349
Fatalities 0
Second aircraft
Type F-86 Sabre
Operator United States Air Force
Crew 1
Survivors 1
The Tybee Island B-47 crash was an incident on February 5, 1958, in which the United States Air Force lost a 7,600-pound (3,400 kg) Mark 15 nuclear bomb in the waters off Tybee Island near Savannah, Georgia, United States. During a practice exercise, the B-47 bomber carrying the bomb collided in midair with an F-86 fighter plane. To protect the aircrew from a possible detonation in the event of a crash, the bomb was jettisoned. Following several unsuccessful searches, the bomb was presumed lost somewhere in Wassaw Sound off the shores of Tybee Island

That's one that we know of. Just because the powers that be tell you everything's hunky dory, doesn't mean that it is.

So as far as any of the tens of thousands nukes having gone off by accident everything is hunky dory for the last 60 years or so.
1 Reply
-1
Reply Sun 22 Sep, 2013 04:56 am
@BillRM,
There's lots things that can go wrong other than an actual explosion, and we don't know how many explosions nearly happened.

Whether it was a functioning nuclear bomb or one with out it core in place remain an open question to this day.

At least, the bomb was handled as if war a functioning nuclear bomb - from the planes being part of the "airborne alert mission" to the paper by the Sandia laboratories expert.
But it's unclear until now, whether the weapons were "armed" or "unarmed2 when they were falling through the North Carolina sky. (The problem seems to be that the military use of those two words, with regard to weaponry, is not strictly precise.)
1 Reply
1
Reply Sun 22 Sep, 2013 06:04 am
@Walter Hinteler,
I don't poo poo anything that counters an "engineering opinion" of something being intrinsically safe or "designed" safe.

I remember our discussions in nuke chemistry about the CAstle Bravo Thermonuclear test in the 50'. The "Scientists" did not fully understand the trail of nuclear induced changes to specific isotopes of lithium. The result, at Castle Bravo was a"designed" energy release of 3 megatons from Li6. Instead, since most of the isotope used was Li7, it ws discounted as a fuel source. Initial bombardment by neutrons turned Li7 into Li6 and the yield at Castle Bravo was about 5 times greater than "sesigned" . It maxed out at 15 megatons.
Quite an afternoons firecracker.
0 Replies
-1
Reply Sun 22 Sep, 2013 06:20 am
@farmerman,
This is a link to the original article in The Guardian. There are further links in the article.


This is from the original article published in the Guardian. I just posted the link in my response to FM.

Jones found that of the four safety mechanisms in the Faro bomb, designed to prevent unintended detonation, three failed to operate properly. When the bomb hit the ground, a firing signal was sent to the nuclear core of the device, and it was only that final, highly vulnerable switch that averted calamity. "The MK 39 Mod 2 bomb did not possess adequate safety for the airborne alert role in the B-52," Jones concludes

I have some doubts, if we ever get to know, if the two of you are correct or others.
At least, we don't have to wait 30 years until we got to know your expertise

the current republicans do not in any way resemble Lincoln, Eisenhower or Bush 1,

That's not true, glitter. They all have been or want to be war criminals and terrorists.

You should try substance instead of glitter, bag.
0 Replies