As of September 10, 2011 the number of Islamic Jihadist
terrorist attacks/threats during Obama's rule was 11.

4. New York and Colorado – September 21, 2009
Three men were arrested and charged in the ongoing terror probe centered around New York and Colorado. The three men are Najibullah Zazi, 24; his father Mohammed Wali Zazi, 53; and Ahmad Wais Afzali, 37. When authorities searched Zazi’s car, they found a laptop computer that contained “a jpeg image of nine-pages of handwritten notes. Zazi had connections to high levels of al Qaeda.

5. Dallas, Texas — September 22, 2009
A 19-year-old Jordanian man, Hosam Maher Husein Smadi, was arrested on charges he intended to bomb a downtown Dallas skyscraper. Smadi placed what he believed to be a car bomb outside the 60-story Fountain Place office tower, according to a statement from the U.S. attorney’s office in Dallas. The decoy device was given to him by an undercover FBI agent.

6. Fort Hood, Texas — November, 2009
Fort Hood massacre: Major Hasan killed 13 service men and women and wounded over 40 others. He has been linked to al-Qaeda.

11. New York and DC, September 9, 2011
Islamic terrorists threaten to attack on the 10-year anniversary of 9/11. Both cities on ‘high alert’ as ‘a specific, credible threat’ targets New York and Washington. www.foxnews.com

2 Replies
-1
Thu 25 Apr, 2013 11:14 am
@H2O MAN,
As of today, the number of US terrorist attacks on other countries, other people and US citizens is much much much too numerous to accurately count, largely because US governments keep these horrific acts hidden from US citizens who somehow believe that they control their government officials when all they really are is a bunch of sheep.
0 Replies
1
Thu 25 Apr, 2013 11:22 am
@H2O MAN,
Quote:

The data - which excludes 1993 - shows how there are actually fewer attacks now than in the 1970s.

2013
Feb. 1, Ankara, Turkey: Ecevit Sanli detonates a bomb near a gate at the U.S. Embassy. Sanli dies after detonating the bomb. One Turkish guard is also killed. Didem Tuncay, a respected television journalist, is injured in the blast. Unlike the bombing at the embassy in Benghazi last September, the U.S. government immediately calls the bombing a terrorist attack.

April 15, Boston, Mass.: multiple bombs explode near the finish line of the Boston Marathon. Two bombs go off around 2:50 in the afternoon as runners finish the race. At least three people are killed. One is an eight year old boy. More than 170 people are injured.

In March 2011 Stevens was appointed the official U.S. liaison to the al-Qaeda-linked Libyan opposition that provided weapons to Syrian rebels. Writer and intelligence expert, Clare Lopez points out, “Stevens was tasked with helping to coordinate U.S. assistance to the rebels, whose top military commander, Abdelhakim Belhadj, was the leader of the Al Qaeda affiliate, the Libyan Islamic Fighting Group (LIFG).“ Stevens was authorized by both the U.S. Department of State and the Obama administration to aid and abet individuals and groups that were, at a minimum, allied ideologically with our enemy, Al Qaeda.


Obama and Clinton were, of course, on the side of terrorism. What the US was doing was what it always does, engage in trying to overthrow governments that it doesn't have control of - THAT IS TERRORISM.

Stevens was engaging in terrorist actions.

April 15, Boston, Mass.: multiple bombs explode near the finish line of the Boston Marathon. Two bombs go off around 2:50 in the afternoon as runners finish the race. At least three people are killed. One is an eight year old boy. More than 170 people are injured.

"One is an eight year old boy". "multiple bombs explode".

One thing ya gotta give you guys - you sure know how to do propaganda.

Perhaps you missed this, Peeman.

Killing children is the all-American way


Madeleine Albright, the American ambassador the United Nations, was asked on nationwide television in 1996 if the death of half a million Iraqi children from US war and sanctions on that country was a price worth paying. Albright replied: “This is a very hard choice, but the price - we think is worth it.”


That was before the so-called Second Persian Gulf War that began in 2003 with American air force “shock and awe”, followed by nearly nine years of illegal military occupation - an occupation that included the use of nuclear munitions and white phosphorus on the civilian populations in Fallujah and elsewhere, and involved countless massacres of families and children by US helicopter gunships and troopers.

Since Albright’s infamous admission, the death toll of Iraqi children from American military crimes can be safely assumed to run into multiples of what she candidly thought was a price worth paying more than 16 years ago.

Earlier this week when President Barack Obama was offering condolences to the families of the 20 children shot dead in an elementary school in Newtown, Connecticut, he said: “Whatever portion of sadness that can share with you to ease your heavy load, we will gladly bear it. Newtown, you are not alone.”

Indeed, Newtown is not alone. Children are slaughtered every week by Americans all over the world on the watch of Commander-in-Chief Barack Obama and his White House predecessors.

One study by James Lucas in 2007 put the death toll of civilians from American wars and sponsored conflicts in 37 countries since the Second World War at up to 30 million lives. The proportion of that figure corresponding to child deaths is not known but if the casualty rate of Iraq is anything to go by we can estimate that the number of children killed by American militarism and covert wars since WWII is easily in the order of 20 million - that is, a million times the carnage last week in Connecticut.

The countries where these American-inflicted deaths occurred include: Korea, Vietnam, Laos, Cambodia, Angola, Congo, Afghanistan, Pakistan, El Salvador, Guatemala and Nicaragua. They also include Iran during the American-backed Iraq war of 1980-88. Every continent on Earth has felt the American hand of death.

But note the figure of 20 million child deaths from American militarism is bound to be a serious underestimate of the actual total. In the last five years, the world has seen an escalation of child mortality from the carcinogenic legacy of depleted uranium and suspected use of other nuclear weapons in Iraq. The above figures do not include the latest killings from American assassination drones in Afghanistan, Pakistan, Somalia, Yemen and other suspected war theatres, such as Mali in West Africa. Nor do the figures include overt and covert American military action in Libya last year and currently in Syria - nor the ongoing imposition of crippling sanctions against Iran where an untold number of sick children are dying from lack of medicines due to Washington’s import blockade. 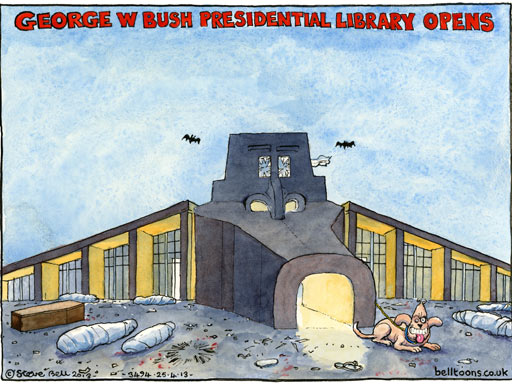 Bush's presidency consisted of two wars, one of which was illegal, and biggest assault on freedom since WW2, the Patriot Act.

2 Replies
1
Sat 27 Apr, 2013 12:01 pm
@izzythepush,
Not because he has to be "balanced," but because I would expect that the Afghan and Iraqi wars affected him in this way, the Afghan surge and drone attacks would too.

There's enough corpses and coffins for a political cartoonist to lay at the entry to the Obama Presidential Library.
2 Replies
0
Sat 27 Apr, 2013 12:01 pm
@izzythepush,
Quote:

Bush's presidency consisted of two wars, one of which was illegal,

Both were illegal, Izzy, both were war crimes of the highest order and all the war crimes that flowed from that were examples of the brutality of the US and all the little poodles that followed them in.
0 Replies
0
Sat 27 Apr, 2013 01:38 pm
@Finn dAbuzz,
Finn dAbuzz wrote:

Not because he has to be "balanced," but because I would expect that the Afghan and Iraqi wars affected him in this way, the Afghan surge and drone attacks would too.

There's enough corpses and coffins for a political cartoonist to lay at the entry to the Obama Presidential Library.

There's enough corpses and coffins for a political cartoonist to lay at the entry to the Obama Presidential Library.

You're absolutely right, Finn. It's a pretty difficult thing to weigh viciousness among these war criminals but war criminals they most assuredly are.

If that's true, then, sadly, it says more about the UK then George W Bush.

That's one way to twist it, Finn.
0 Replies
0
Sun 28 Apr, 2013 02:23 am
@Finn dAbuzz,
No it's because Bush was the worst president in living memory, if not ever. No other president is responsible for the deaths of so many British servicemen. He combined incompetence with a disregard for human life, both wars were ultimately pointless, increasing the influence of Iran and Al Qaida.

He brought back torture, and his 'Yo Blair,' remark showed how much contempt he had for the British people.

The worst thing about his presidency was that after 9/11 there was a once in a life time chance to make the world a better place. There was so much goodwill for America, Jack Straw was in Iran, and things were looking really optimistic.

Thaty chance was squandered with Bush's talk of the axis of evil and crusades. He was so stupid he didn't even understand why crusade was offensive. Now the hard line mullahs are in power in Iran, and they're looking to get nuclear weapons.

All of which can be firmly blamed on George Bush. It says more about the American people that his approval rating has risen to 47%. It just proves what JTT says about Americans believing propaganda.
3 Replies
1
Sun 28 Apr, 2013 06:38 am
@izzythepush,
izzythepush wrote:

No it's because Bush was the worst president in living memory, if not ever.

... and his 'Yo Blair,' remark showed how much contempt he had for the British people.

No it's because Bush was the worst president in living memory, if not ever.

... and his 'Yo Blair,' remark showed how much contempt he had for the British people.

Two quotes that show very clearly you don't know what the hell you're talking about.


Jizzytheclueless has supplied us with a rather large number of quotes that make your point crystal clear.
0 Replies