Benghazi is just to big of a story to let it fade away.


'Stand Down':
U.S. Had Two Drones, AC-130 Gunship, and Targets Painted in Benghazi


Multiple reports are stating that the victims of Obama’s stand down orders were “painting” targets around the consulate in Benghazi. Military personnel in a defensive position at risk of being overrun by superior forces WOULD NOT be wasting time and limited battery power to “paint” targets unless they were under the impression that there were aircraft on scene, or about to be, that could place ordinance on the “painted” target. AND unless someone told them that “help was on the way” and/or “imminent” they would not have just assumed that such aircraft were on route at all, much less close enough to take advantage of “painted” targets.
0 Replies
-3
Reply Mon 29 Oct, 2012 01:59 pm


Is there a mainstream media cover-up of an Obama administration cover-up
in the wake of the 9/11 Benghazi attack that left four Americans dead?

Is there a Benghazi media coverup? 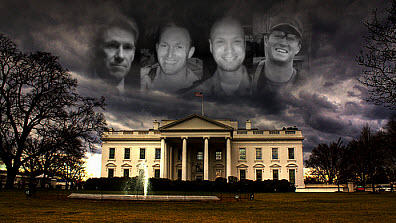 Four Americans are dead and the American people are being lied to as to how and why they got that way.

And the biggest liars are the RW pundits.

Fact - there was not a 7 hour battle at the consulate.
Fact - the consulate was attacked and 2 people died from smoke inhalation there. The other people were rescued and taken to a CIA annex elsewhere in the city.
Fact - The CIA annex was hit with mortar fire several hours after the consulate was first attacked killing the other 2 people.

The first email was sent at 4:05 p.m. It read: "The Regional Security Officer reports the diplomatic mission is under attack. Embassy Tripoli reports approximately 20 armed people fired shots; explosions have been heard as well. Ambassador Stevens, who is currently in Benghazi, and four COM personnel are in the compound safe haven. The 17th of February militia is providing security support. The Operations Center will provide updates as available."

At 4:54 p.m. update 1 was sent, which read: "Embassy Tripoli reports the firing at the U.S. Diplomatic Mission in Benghazi has stopped and the compound has been cleared. A response team is on site attempting to locate COM personnel."

I find it amazing how so much of the evidence is just ignored.
The emails clearly show it wasn't a 7 hour battle yet that is ignored in the RW story of what happened.
The facebook posting then clearly shows that those claiming responsibility blamed it on the video but the RW story is that they are responsible because of their claim but we should ignore why they did it in their claim.
1 Reply
-1
Reply Tue 30 Oct, 2012 01:50 pm


The list of lies told by Obama and his administration are staggering.

Do the math; the attack began at 9:40 pm local time and a second one for the CIA annex at about 4 am.
The number of armed Islamic terrorist was about 200... they were heavily armed and on a mission.
The 1.2 mile long hike between attack sites is included and what was left of the original force would
be moving pretty quickly to hit the second site... 1/2 hour cease fire.
1 Reply
2
Reply Tue 30 Oct, 2012 04:34 pm
@InfraBlue,
InfraBlue wrote:

Where do the conspiracy theorists get the idea that the attack lasted seven hours?


As you can see by Spurt's post, they just make up whatever they want to fill in the time gap between the first attack and the later one.
1 Reply
2
Reply Tue 30 Oct, 2012 04:36 pm
@H2O MAN,
I am curious how you know so much about the attackers, their armaments and their mission and how long it took them to march 1.2 miles. I wonder if you weren't one of the attackers based on your knowledge.
0 Replies
-1
Reply Tue 30 Oct, 2012 04:36 pm
@parados,


you're not really interested in learning the truth, you just want to keep it real... I get you.
1 Reply
2
Reply Tue 30 Oct, 2012 04:41 pm
@H2O MAN,
According to the emails, the compound was retaken less than an hour after the initial attack. Libyan civilians found the Ambassador and took him to the hospital at 1AM. The second attack didn't occur until 4AM.

I don't think I am the one that isn't interested in learning the truth since you want to make it seem that somehow the attack continued from 10PM until 4PM. No such thing occurred. Unless you want to argue that it took the CIA team 6 hours to drive back that 1.2 miles, your argument is completely bogus.
0 Replies
-1
Reply Tue 30 Oct, 2012 04:57 pm

Obama's handling of the 9/11 terrorists attack has been and continues to be 100% BoguS.
0 Replies