Only 31 more days till Halloween!

Forums: Halloween, Costumes
Email this Topic • Print this Page
Reply Mon 1 Oct, 2012 02:26 pm
What costumes are you working on this year?

Sozlet's going to be Mother Nature.

We had this idea late August (she tends to think about Halloween costumes year-round and start seriously thinking in July or so). We went out and looked for a base dress to work off of right away, and found an AWESOME dress at our favorite local resale shop for $8. $8!

It was in the end-of-season sale rack and had already been marked down several times. It's a sort of bridesmaid's dress, new it was probably ~$150 plus. And looks like it's been worn no more than once.

It's a sort of a shimmery green, very fitted and fits her very well, slightly embroidered top, spaghetti straps, with a matching stole (length of the same fabric.)

The matching stole is super-important because I'm going to line it in fur so she can brave the usually-pretty cold temps. With elbow-length gloves and fuzzy pants on under the (floor-length [once I hem it]) dress, she should be warm enough.

I have already bought clouds of multi-colored green tulle (three shades) and will be making an overskirt/ bustle sort of thing.

The main attraction will be a giant crown with all sorts of "nature" stuff on it. We have a (very realistic-looking) snake, and will be reusing (fake) pearls and (real) seahorses from her mermaid costume a few years ago. She really wants a chipmunk, looking for realistic-looking + cheap ones. Found one that's marketed as a dog toy that will do if nothing else does.

Can probably find a realistic-looking mouse or rat if nothing else.

Also have several realistic-looking birds we use on our Christmas tree, will probably use one of those and then one of our smaller crows. (We have a lot of crows.)

I also have some liquidy blue fabric (bought for mermaid!) that I may add somehow. A "river" panel to her dress, or something.

Green hairspray (used for locks of hair, not the whole thing).

Her hair is now VERY long and very big and wavy and will be down and wild.

Her eyes are changeable but always look really green when they're surrounded by green.

She may still have her cast then but at least it's green.

We're looking forward to it!

Mo is going as a zombie clown.


I had this thought last night that if he wanted something more gruesome, with social commentary/satire, then he could be a zombie eating Ronald McDonald's brain.

And there's always the old standby, "does this taste funny to you?"
0 Replies
1
Reply Tue 2 Oct, 2012 08:00 am
@sozobe,
Mother nature sounds wonderful! What a great idea. Sozlet always comes up with inventive costumes.

Zombie circus would be the best! Tell Mo to get new (cool) friends.

No kidding! I've even offered to make them costumes but they're at the age where they worry about the "cool" factor. Zombies are cool but anything too costumey isn't.

I just need to find a maroon mumu and a maroon furry scarf to wrap around me noggin. Sheer brilliance!

I saw this Breaking Bad costume the other day. LOVE IT! 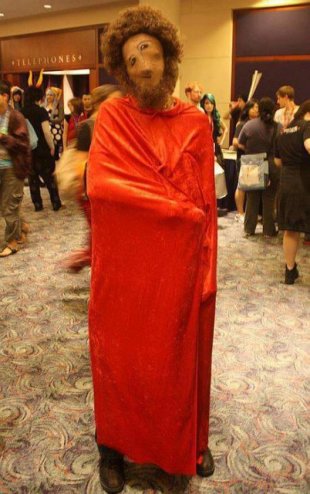 The rest are here: http://hypervocal.com/entertainment/2012/the-evolution-of-girls-halloween-costumes/
0 Replies
1
Reply Wed 10 Oct, 2012 06:57 pm
I got a realistic chipmunk (not, like, a live one) (or a dead one that had been alive), it's made out of some sort of resin and is heavier than I'd hoped. Might have to ditch it and use a little mouse. There are various halloween mice that should work.

I had this complicated plan to make a structured cape (instead of just the fur-lined stole) and glue the chipmunk to the shoulder, but that's too complicated. Sigh.

By the way, just curious, how many of the people responding here make your own costumes? I don't think I've bought one for myself or my kid ever, except when it's the base for something totally different. (Like I bought a "snow queen" outfit on sale and made it into an alien princess costume with a lot of silver spray-painted leaves. The hoop skirt that came with it has been used for multiple purposes since, very useful.)
1 Reply
1
Reply Wed 10 Oct, 2012 07:36 pm
@sozobe,
Mo's is always kind of a mish-mash between store bought and home made. I guess you could say that it's home made out of store bought parts.

I've been working on his mask this week so I'll use it as an example...

It started with a full skull mask that goes completely over his head and chest. I sewed a half clown mask (eyes, nose) onto that and cut away parts of the skull. Then I sewed a Harpo Marx wig on. Then I cut a big hole in the wig and skull and pushed part of a latex brain through that. Then I splashed on some "blood" and rolled the whole thing in a pile of sticks and leaves.

And thanks to Goodwill, the whole thing cost about $7!

But I still want a silly little clown hat to top it all off.

I've bought all the other parts (thanks again, Goodwill) but need to finish modifying and putting them together. The whole thing will end up costing about $25.
0 Replies
1
Reply Sat 13 Oct, 2012 07:35 am
@boomerang,
A true sign that Halloween is around the corner: I've spent the morning looking for my bra.

J/K Antonio said he wants to be a zombie this year. We donâ€™t take him trick or treating instead they have this Halloween party for the kids and the parents bring the treats.
1 Reply