What neighborhood do you live in?

I moved as many of you have heard - to a neighborhood. Somewhere were people water their lawn, have kids running around, have bonfires, meet in the town center for a lame (former wanna be) rock band. There are horse farms and farm farms. I feel like I live in the country.

I used to live in a condo village with neighbors from h*ll in more a city environment.

(I know, we were just talking about this on the other thread.)

We don't have the horse farms and farm farms (sounds nice!)

We're probably more urban than you are -- houses are close together, not far at all to downtown Columbus.

But we've got big trees and lawns and gardens and kids everywhere and lots and lots of cheesy local events. And block parties.

If anyone from the community has something bad happen, the casseroles start arriving.

If a kid does something wrong, his or her mom knows about it within about 10 minutes.

And this is the part I really love -- all adults are presumed to be responsible for all kids. So if a kid does something wrong, he's going to be stopped/ scolded before his mom even knows about it.

I know this might turn -- that I may well get to the point where I want everyone's nose out of my business. And I've already had to deal with nosey neighbors (who are actually out of character for the area).

For now I like it a lot though and feel really lucky. Knock on wood.
0 Replies
1
Reply Thu 6 Sep, 2012 02:59 pm
Well, I live just north of the centre of my city in a very residential neighbourhood. There are 3 or 4 playgrounds and at least two schools. I rarely see any kids on the streets, though. There is an off-leash dog park 4 blocks away, and we are 2 blocks from a main thoroughfare although we can't hear the noise. We are very centrally located and I like the place. It's an established neighbourhood called West Hillhurst.
0 Replies
2
Reply Thu 6 Sep, 2012 03:13 pm
I live in a very, very quiet town in Massachusetts. It's very safe, probably because there's almost nothing to do except dream, walk, and think.

We have close to no crime and I might add there's very little night life.

It's very different from the neighborhood in Chicage where I grew up and went to school. In Chicago, growing up we had at least 1 tavern per block and just to make it real interesting, every Tavern had a big, noisy jukebox blaring away till about 5 am in the morning.
What was interesting about many of these Taverns ( or saloons ) was the presence on the upper floors of dance studios where kids ( mainly young girls ) learned to tap dance or take ballet. Classes were day and night time.

The kids just tapped their little legs off ,while the drunks crawled in and out of their drinking holes.

Great life and who can forgot the aroma of fresh beer?


Nothing like that where I live now in Massachusetts. I would guess that on week nights, most folks around here are in bed by 10-11 pm.
0 Replies
1
Reply Thu 6 Sep, 2012 03:22 pm
@Linkat,
We live in an apartment house (condo), in a rented flat on top of a two storey building.
It's a village, part of middle-seized town (65,000 inhabitants) with nearly 5,000 inhabitants.
It's a 'spa-village' = we've got a thermal-salt-source here, with the pools just 5 mins walking away. And the park is in view from our windows.
Real countryside is two minutes away ....

It's a mixed neighbour: we got some rather rich neighbours but 'normal' people as well, multi-cultured, too.
0 Replies
1
Reply Thu 6 Sep, 2012 03:52 pm
I live in the wrong neighborhood for my needs and it's all my own fault. I was trying to buy fast. I should have bought the one I bid on mid town and then backed out of (teeeeny bathroom, too much yard). Instead I bought near friends in a place I checked had transportation, and that turned out to be close to nil, and the stops a long walk in heat or cold. I'm a strong proponent of mixed use development and what I call pedestrian culture. It was as if I bought against myself in a hurry, to save money and not impose on others. Max stupid.

I could have stayed at a motel and taken my time, my fault.

So, past that, I like my small neighborhood. A tract, built by a developer I hope is jailed (I worked once for a major developer in the US, another tale for another time, but I know enough to consider this company as full of curs, in contrast to that past one.) It's a bunch of small townhomes. I say small with a sort of wink, as my place approaches twelve hundred sq feet, and my favorite all time house, the california bungalow in Venice was something like 680, depending on whether you counted the tack on; spent 25 good years there, most of them as a couple.
But this place looks and feels smaller.

The grace note is that I like the people, including all close neighbors up and down the street. I like the way the neighbors in general make the places theirs. Just today I noticed one had put up a large photo type thing of an old car above the garage. Usually we have people putting up various new mexico iconography. We have children, but mostly in my immediate span, as rental folks. Once there was a family that scared me as the kids seemed to have no sense re cars. Chihuahua!

My duplex neighbor bought as a single woman and I think married the guy (I am even guessing their wedding celebration was what was going on around the time Pacco died, when I was like a madwoman crying.) I like the guy too.
Neither of us are nosy but we have both helped each other. We had a somewhat resolved spat re their putting big rocks on our intermediate space. I blew my top. You all know me, re blowing my top. I do japanese rock work, not stones plopped from the sky. We'll see, but it isn't life or death. The woman got my view, was interested.

On the other side, the woman who knocked loudly on my door one 4 a.m., her house on fire. She has two daughters and a divorced husband and a cocker spaniel (I'm a softie there.)

On the side of her, a gay couple. I like both of them, and they seem to like me. I think maybe the former owner said I was ok as they are definitely friendly. They'll agree to my taking some of their plants, a help for both of us, once the weather calms down.

On the other side of them, an older woman, who got scared today when she hadn't seen me backing out, as I was waltzing to the mailboxes. I reassured her. I think I need to ask her here for tea or coffee.

Moving north east? hard to tell, things are a little cattywampus here re map north, is a guy or family with a lot of sheriff cars. This is potentially useful. We've only talked once, ok so far.

Well, you get the idea.
Despite my high irritation with the construction, I like my neighbors.

I didn't mention the woman on the other side of the street who owned the house that became a rental. She invited me in, when I first moved here, to one of the cleanest places I've ever seen, but not a sterile place at all. And showed me her shrine to her mother.
I don't know. The family might have intervened, but I know alzheimer's and she was quite lucid.

Anyone taking photos?
I know it is not my business.
1 Reply
1
Reply Thu 6 Sep, 2012 07:09 pm
I live in the middle of the big green C. The C is the sprawling college lawn to the north, a golf course to the west, and a creek to the south. It is considered one of the most livable neighborhoods in one of the most livable cities in America.

It was one of the city's early suburbs so it is close to downtown, most of the houses were built between 1920 and 1945 so it's an eclectic mix of styles. Many of the houses cost in excess of a million dollars but it's very subdued, there aren't many show offs. People restrain themselves.

It isn't at all unusual to find four generations of a family living here. Nobody leaves. Some houses are passed down from generation to generation, having been owned by the same family for nearly 100 years. Sometimes it's a little too cozy, it almost feels incestuous.

It's a pretty idyllic place for kids -- safe and green and inside the big green C. We get 300+ trick or treaters. The boy next door sneaks into my garden and eats strawberries. The little girl across the street knocks on the door to ask if she can play with our dog. Our neighbors bring us fresh eggs from their chickens on Sunday morning. Everybody talks and smiles. It's almost unreal. We're so damn lucky.
1 Reply
1
Reply Thu 6 Sep, 2012 07:18 pm
@boomerang,
That makes me blink, so good.

The cool thing is, because so many of the houses have been passed down, that the grocery store checker can live a few doors down from the Senator. (True story.)

Here's info about the neighborhood and what's around:

It doesn't feel neighborhoody to me. I've lived in other parts of the city that felt homier. It might be because my building is on the corner of a very commercial avenue.

My street was in two movies. The first was Marathon Man--the car chase at the beginning. The second was a Spike Lee movie. I don't know the title, but I saw him outside directing a lot.


From Henry V. The building where this all took place survived the blitz and is now a pub.

0 Replies
1
Reply Fri 7 Sep, 2012 06:28 am
Great and quite different neighborhoods. I like hearing about the different places people live and the neighbors and dynamics.

Love the pictures - beautiful place.
0 Replies
2
Reply Fri 7 Sep, 2012 06:32 am
I was hoping I could still find a picture of our home online as we so recently bought it and here it is:

It is kind of a twisty turny street street and our house is located right after one of the turns - huge back yard with lots of trees and a little brook behind the trees. You almost feel like you are in the woods when you sit out on the back deck. Houses are a good space a part where you are not on top of one another, but close enough for a neighborhood feel.

Houses are all different not one of those neighborhoods where all houses are the same. Not far from a pond where many go fishing and canoeing. The town has lots of these little brooks/rivers where you can canoe and kayak. 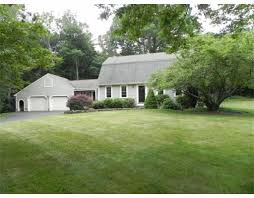 Here's some photos (not mine) from around my neighborhood:

My street (aka -- the linden alley) 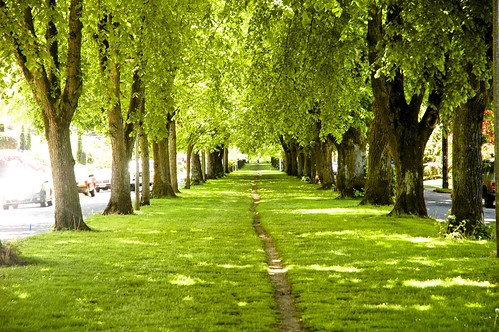 The park/garden (connected to the golf course):