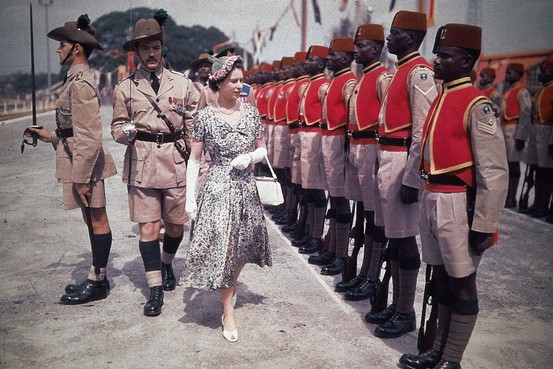 Interesting article from the Wall Street Journal. I notice other American media are also picking up on reporting onthe celebration. Whaddaya all think? Is there anything here to celebrate?

Type: Discussion • Score: 13 • Views: 6,737 • Replies: 81
1
Reply Fri 1 Jun, 2012 06:37 pm
There are people here who are slavishly addicted to royalty gossip, there are English ex-pats--i am not interested, but i understand why it happens.
1 Reply
1
Reply Fri 1 Jun, 2012 06:44 pm
@Setanta,
I remember her coronation. Or, rather, I remember the day of her coronation because we all got time off from school. I must have been in the 7th grade or thereabouts at the time. Back in those dear old days (1953 to be precise) there were no TVs in classrooms. There wasn't even a set in the Principal's office as far as I know. But as the coronation was going to be carried on television even here in the USA, the Queen's former colonial turf, the Board of Ed (Mr.Ed, I presume), in its infinite wisdom, had decided that classes should be dismissed very early and the kids all encouraged to go home and turn on their televisions.

This isn't totally off topic.
0 Replies
1
Reply Fri 1 Jun, 2012 07:28 pm
@Irishk,
I believe -- if I heard aright on the radio -- that the official jubilee celebration starts tomorrow. Or maybe today. Or yesterday. I wasn't paying that much attention.
1 Reply
1
Reply Fri 1 Jun, 2012 07:39 pm
@Lustig Andrei,
BBCAmerica has coverage of all things royal starting at 6am on Sunday, going until 10pm.

Are you sure you're Irish?


I had been wondering the same thing.
0 Replies
1
Reply Fri 1 Jun, 2012 09:42 pm
I am from the school of thought that doesn't really hold "royalty" in high regard. I've always thought it was very retarded, the way we fawn over every little aspect of what those people do. I mean we fought a momentous goddam war to be free of England. Nowadays the "royal family" serves no real functional purpose, and we're supposed to be in awe of their ostentatious preening, what they wear, who they marry, etc.

One thing you can say for the queen - she isn't daily involved in committing terrorist acts/war crimes against other countries.
2 Replies
1
Reply Fri 1 Jun, 2012 11:08 pm
I am British, and I would like nothing better than the abolition of the monarchy and an English Republic (to go with the Welsh and Scottish ones and a united Ireland). I hate it when foreigners assume we all love the royal family and the monarchy.

One thing you can say for the queen - she isn't daily involved in committing terrorist acts/war crimes against other countries.

Her emblem was worn by forces involved in some pretty murky goings-on in Malaya and Kenya in the early part of her reign, and also in Vietnam. Among others, at Thua Tich on May 29th and 30th 1969, and Binh Ba in June of that year.

I am an unabashed Anglophile. I was stationed there for two years in the mid-1950ΓÇÖs (USAF) and just got to love the place and the people. I remember spending many, many hours outside Buckingham Palace hoping for a lucky sighting of the beautiful Queen or her beautiful sister, Margaret Rose.

I understand Americans who find it less than attractive and I understand Brits who want to see the monarchy ended. But what can I say? I love the pomp and pageantryΓÇªand I think the Queen is fabulous.

I couldn't tear myself from watching Celebrity Apprentice this season.
1 Reply
2
Reply Sat 2 Jun, 2012 08:00 am
The Queen is rather popular right now, and I think this T shirt best expresses why that is.