Elizabeth II had joined the Women’s Auxiliary Territorial Service (trained as a driver and mechanic) and is thus the only actual head of state who served in uniform during World War II.

I thought she became the Queen after WWII?


I think, anyone with a bit of education thinks so. And the data don't say it differently.

I thought she became the Queen after WWII?


She wasn't Queen when she was in the ATS. She is now though.

It was the ATS she was in.

The women's branch of the army was called the Auxiliary Territorial Service, or ATS. It was formed in 1938 and after one year 17,000 women volunteers had joined up. This number grew to over 200,000 by the end of 1943. The new recruits were sent to army camps for their basic training. Here they slept in huts, learnt to march and obey orders and kept the camp scrubbed clinically clean. At the end of the four weeks of training there were written and practical tests to find out which line of work they were best suited to. 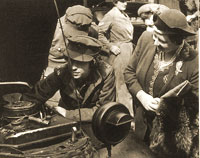 Point being, wtf is Foofie on about?


Perhaps he just wanted to see if I knew the year when she became head of state in the UK? (He can't know that I'm surrounded by Union Jacks and the flag of St. Piran these days. And that in eight out of ten tv channels the Jubilee is a theme at any given moment.

wtf is Foofie on about?

She failed to comprehend this correctly ---

Elizabeth II had joined the Women’s Auxiliary Territorial Service (trained as a driver and mechanic) and is thus the only actual head of state who served in uniform during World War II.

--- she assumed it meant that Elizabeth had been head of state during the war.

in eight out of ten tv channels the Jubilee is a theme at any given moment.

It's awful! I have got some Scandinavian noir crime dramas (series 1 of Irene Huss) to distract me.

It was the ATS she was in.

It's probably just his accent.

Having said that I'm well impressed that Liz got her hands dirty changing tyres.

Okay, thnx. That was off the top of my head. Point being, wtf is Foofie on about?


I ask myself the same question every time he posts.
0 Replies
2
Reply Sun 3 Jun, 2012 03:33 pm
"she was trained as a mechanic"
So she could get out and fix her Rolls Royce limo when it breaks down during the parade?

Given that, and her talent for picking out some of the strangest hats ever made, that puts her at least two useful talents up on Mitt Romney. Could we borrow her to run as the Republican (our Republicans, not yours) candidate for President?

But, geez, I thought everyone with even a modicum of historical understanding..

That's as funny as Setanta ragging on someone for their lack of understanding of language, Merry.
0 Replies
1
Reply Mon 4 Jun, 2012 02:50 am
@MontereyJack,
Ex Prime Minister John Major was interviewed about her. You probably won't remember him, he was the very dull grey one between Thatcher and Blair.

The pm has to attend weekly meetings with the Queen. Major said she always took an interest, she was the one person he could talk to in absolute confidence, and she gave really good advice, having been queen since Churchill was pm.

She is also one of the few people left who have been in the same room as Churchill and Roosevelt.
0 Replies
3
Reply Wed 6 Jun, 2012 12:45 pm
I thought it was a super celebration. Really fit for a Queen.

I enjoyed "observing" it, in the sense of merely watching it as a spectator. The pageantry and pomp and ceremony are things the Brits do better than anyone else in the world, and it is a form of theatrical entertainment that keeps tourism thriving, so I think the Royals earn their keep.

And this time they put on a wonderful show, from the flotilla on the Thames to a dynamite concert and marvelous fireworks display. It was all quite enjoyable to watch.

I also learned all sorts of interesting trivia. Like the fact that the Queen's skirts are weighted to prevent anything that might cause a "wardrobe malfunction" and an unwanted show of leg, and the armholes of her garments are cut larger so she can wave without hiking up her jacket or coat. Who knew? And the ubiquitous black handbag, a style called "the beaver", has an extra long strap to hang properly on her arm and is made to be lightweight for comfort. Why she wears only a black bag with pastel colors, when a lighter neutral color would probably look better, was not fully explained, nor will we know what's carried inside it, but it's main function appears to be to give her something to do with her non-waving arm--it helps to maintain her posture and composed appearance, which must be why she even had it dangling when she was out on the balcony of Buckingham palace. She has developed a definite style, so people in a crowd can clearly identify her as the Queen, even if she is seen from a considerable distance. She may not be trendy, but she certainly has her own "look" and it's consistency is important to the image.

I have no personal feelings about either the Queen or the monarchy. I admire her physical stamina at the age of 86, and I think she has some seriously sensational jewelry. Given that I think being a Queen is sort of an anachronism in this day and age, and I suspect a good deal of her job is doing work I would find extremely boring, I don't envy her, but I do admire her ability to fill the bill, and I can understand that she means considerably more to the people of the Commonwealth than I am able to appreciate.

There is nothing wrong with rewarding and honoring someone for a job well done, which is how I viewed the Jubilee celebration. Being Queen was not something she sought out--it was a responsibility that was thrust upon her, and she has always fulfilled her duties and likely will continue to do so until her death. Celebrating this milestone in her reign was a happy event and a cause for national pride. I could only watch from the sidelines, but I thoroughly enjoyed all of it and I am glad there was television coverage here. It was a jolly good show.
3 Replies
1
Reply Wed 6 Jun, 2012 01:15 pm
@firefly,
I've been told that the handbag often is used as a signal device to her bodyguards and retainers. She can signal her intentions to them by what she does with the bag...how she moves it and where she carries it--especially when she wants to signal that she wants to be tactfully extracted from the attention of someone she has tired of talking to.
0 Replies
1
Reply Wed 6 Jun, 2012 01:21 pm
@firefly,
As a Doctor Who fan I disovered she weighted her skirts when Frazer Hines who played Jamie the highlander said he did the same with his kilt, citing the Queen as inspiration.

Given that I think being a Queen is sort of an anachronism in this day and age,

A lot of people over here would agree with you. It's why I was an armchair republican for a long time. Our whole system is anachronistic though, the monarch being just part of it.

What turned me into a reluctant royalist was considering the alternatives. Either we embrace an executive president like you do in America and France, which would give him/her a personal mandate and be less accountable to parliament, or we take the Irish model and have a non-executive head of state.

Neither option has much appeal. When Blair took us into war with Iraq he had a huge parliamentary majority which meant he was less accountable to parliament. Overall his presidential-style premiership put the kibosh on any desire for an executive president.

Our prime minister Cameron has broken a lot of electoral pledges and pushed through a lot of unpopular legislation, particularly with regard to the NHS. If he were president it would be even worse.

A non-executive presidential head of state would be a lot like the Queen in all but name, but they'd probably be some washed-up celebrity. Less gravitas than the Queen and more likely to be gaffe-prone. Although the Duke of Edinburgh has had his fair share of those.

In short, a lot of us think the Queen is the least worse option, and regrettably accept, if not support the monarchy.
1 Reply