Why do many cartoonists find it "necessary" to give cartoon characters love interests?

good thing you are not trying to sell them.

In the one case where a Disney character has a child, Goofy, they kill off the mother before it makes it to the screen.

BTW, Templar mythology postulates athat Christ and Magdalen did have a child together, that's what the Holy Grail is (according to Templar myth).

It's quite normal for people, once they go through puberty to look for a love interest, someone to share their lives with. If they don't do this they can turn out well weird, doing thing like live in their mum's basement and obsess with cartoon cats who never get drawn, all the time calling people uncircumcised Philistines, and you wouldn't wish that level of dysfunction on anyone.
1 Reply
-2
Reply Tue 11 Oct, 2011 01:09 pm
@izzythepush,
In the OLD cartoons from the '50s, Goofy HAD a wife and was happily married.

STOP CALLING ME JASON- I DID NOT SAY YOU COULD CALL ME THAT.

GROW UP- THERE'S NOTHING FUNNY ABOUT CARTOON CHARACTERS HAVING SEX.

actually, there is a large and growing market of sexy toons.

I am aware of the fact they are trying to use sex to sell cartoons - that DOESN'T make it right.

When I was a kid, I recall watching Catillac Cats- that was a favorite cartoon:

Riff Raff and Cleo SHOULD HAVE BEEN MARRIED: 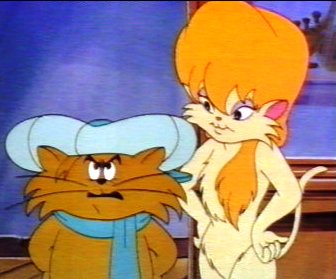 This is like the 8th time you've harped on some fictitious cats and dogs being married in your supposed comic book. Stop bringing things up just to boast and grandstand and get with it already.

Word of warning though, I guarantee you that no one is going to want to read a comic book about a bunch of masked, asexual animals sitting around their secret lair, praying for guidance in dealing with the Greenland super-villain gang that's out to get them while trying to figure out the best way to be super heroes and still turn the other cheek.

That would be about the size of it. Take a look at advertising, films, television, the supposed desire of all men is the perfectly shaped female with the hourglass figure, it is said to turn them on. In fact, in olden days, women learned the best way to get husbands to help in kitchen chores (cooking, cleaning dishes, pots and pans) was by placing several hourglasses strategically in the kitchen. When floors needed to be scrubbed, they would place an hourglass upon the floor and attach a chain to it. The husband would be down on hands and knees merrily following the hourglass across the floor as he scrubbed and scoured as the dutiful wife, yanked the glass, tugging gently at the chain. From this we achieved 3 things.
1)men with strong arms
2)high sales of hourglasses
3)the popular phrase "yanking your chain" which later men took to the level of meaning the wife was yanking their masculine chain (their wiggler). Men being men, began yanking their own chain (masturbating) and floors became filthy until the invention of the mop, when women took over the floor cleaning (except in all male households where the men have learned to share the mop).

So, yes, the hourglass shape is used to indicate sex and sexual charms.

If people want to use sex to get viewers they do BUSTY female charas (mostly believe it or not) and make them wear short skirt / something revealing anyway. Just the "hourglass" figure shouldn't automatically be judged as sexism.
1 Reply
2
Reply Sat 15 Oct, 2011 11:53 am
@JGoldman10,
Quote:

That’s never done anything for me. I’m a virgin just like you, something else we have in common.
1 Reply
0
Reply Sat 15 Oct, 2011 12:29 pm
@jcboy,
I am a Born-Again Christian. I am a GENERATION older than you. I AM NOT QUEER LIKE YOU - or was that some kind of sick facade you were putting on?
1 Reply