What TV show do you remember that you believe no one else does?

Speaking of Kerwin, who else remembers The Family Holvak (with a slightly younger Kerwin and starrring Glenn Ford)? Based on an earlier early movie with the same family, Ford was a rural preacher, Kerwin was his kid, Raymey. In the movie, Ford's character dies, so I was curious when it became a series.

Or for that matter, The Second Hundred Years with Monte Markham?

Strange coincidence or not? tvobscurities mentions My World... in their August 26 entry.

it states: "I’m not sure if My World and Welcome To It, which aired on NBC during the 1969-1970, can be considered a “popular obscurity.” Quite a number of people remembering watching it, and have fond recollections of the show. Following its cancellation it won two Emmy awards, which may have led to some embarrassment at NBC. CBS aired select episodes during the summer of 1972. What interested me most while writing this article was learning about previous attempts to turn the works and life of James Thurber into a weekly television series. Two pilots were produced and broadcast in the late 1950s/early 1960s but neither was picked up. I’d love to see those."

NO idea about the Ugliest Girl in Town! The first was Captain Satellite. It was an afternoon kid's show focused on science fiction and space as well as the popular cartoons of the time. Local kids were in the on-air audience and some got chosen to appear with the captain each day as his co-pilots. 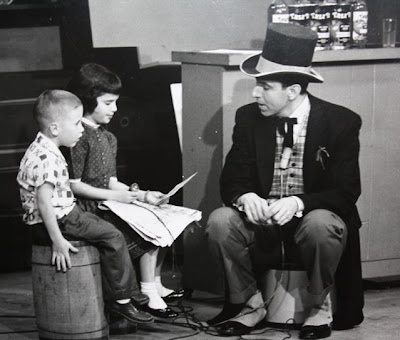 The second was The Mayor Art Show, another local kid's show based on civics and science. Mayor Art would appear in a top hat and coattails. This too had an on-air audience made up of local kids also dressed similarly. This group was known as the city council. Mayor Art made it a point of teaching kids foreign words and phrases in several languages.

His standard greeting was, "A glass of milk and a how-do-you-do." His standard closing was, "We'll be seeing you...subsequently." Each episode, at the end of the show he'd announce the names of the kids who would be invited to the next show to join the city council. He'd hold up a mayor's declaration with their names on it and tell them to stand by their telephones because he'd be calling in the next 30 minutes. He'd let each kid get a chance to tell a joke on air and to also introduce one of the regular cartoons. Peter, Paul and Mary made one of their first early TV appearances on that show.


Code:http://www.hillbilly-music.com/programs/story/index.php?prog=340
1 Reply
1
Reply Sat 4 Sep, 2010 11:12 am
@ibstubro,
The old boy, Toby Elsenpeter, is still alive and active. Unfortunately what I remember most about the show was the sponsor, Prairie Farms milk.

Fade. Cue up a white, horse drawn wagon, pulling down the road. Prairie Farms emblazoned on it's side. Music: "Fresh from the moo to you, it's Prairie Farms Dairy! You'll love milk from Prairie Farms, the very best from the dairy farms. Fresher for quality, better for your family..."
0 Replies
2
Reply Sat 4 Sep, 2010 11:23 am
How manyof you remember the Banana Splits?

another kids show from that era....H.R. Puffenstuff (he's your friend when things get rough)

and who could remember "My Mother the Car"

hmmm...how could that have happened when the car existed before the mother died?

I was gonna go with puffenstuff.

Remember "Have Gun Will Travel

Then there was "Combat"
http://www.youtube.com/watch?v=d0qQGS4fXSY&feature=related

http://crazyabouttv.com/decades/1960s.html
0 Replies
1
Reply Sat 4 Sep, 2010 12:15 pm
@mysteryman,
Around here the Banana Splits were paired with The Monkeys as after school TV. One of the best hours of TV ever (for a kid)!
0 Replies