Forums: History, Women, Female Historical Figures, Heroines
Email this Topic • Print this Page
Reply Mon 18 Jan, 2010 12:31 pm
Sozlet has a class assignment to do a report on a historical figure, that will include some acting + a presentation for a fairly large crowd. She's already done a big report* on Annie Oakley, and Amelia Earhart is a perennial favorite for this sort of thing.

She wants someone in that vein, though -- tough, female, preferably a pioneer of some sort. Someone that people will have heard of but not someone that everyone does for this specific event.

We have so far:

I suggested one of the real female pirates Set has talked about, she was lukewarm about that.


*Sozlet's friend to sozlet when s. was considering Annie Oakley for this project: "No, you already did a report on her! Don't waste your learning!"
Type: Question • Score: 30 • Views: 9,856 • Replies: 89
View best answer, chosen by sozobe

Oh and you added a new one I don't recognize, Lucy Parsons... lemme go read that...

Mary Harris "Mother" Jones (August 1, 1837 " November 30, 1930), born in Cork, Ireland, was a prominent American labor and community organizer, and co-founded the Industrial Workers of the World.

She was born Mary Harris, the daughter of a Roman Catholic tenant farmer, Richard Harris and his wife Ellen Cotter, on the northside of Cork city, Ireland. Some recent materials list her birthday as August 1, 1837, although she claimed her birthdate to be May 1, 1830. Her claims to an earlier date may have been an appeal to her grandmotherly image. The date of May 1 was possibly chosen symbolically, to represent the national labor holiday and anniversary of the Haymarket affair.

The family migrated to the United States and settled in the town of Monroe, Michigan. Harris studied and qualified to become a teacher in Toronto in 1857. She moved to Memphis, Tennessee in 1862 where she married George Jones, a member of the Iron Workers' Union. Two turning points in her life were the 1867 deaths of her husband and their four children (all under the age of five) during a yellow fever epidemic in Tennessee, and the 1871 Great Chicago Fire. After the death of her family, she moved to Chicago and recreated herself as an independent dressmaker. She lost her hard-earned home, shop and possessions in the Great Fire. This second loss catalyzed an even more fundamental transformation: she turned to the nascent labor movement and joined the Knights of Labor, a predecessor to the Industrial Workers of the World (IWW or "Wobblies"). As another source of her transformation into a radical organizer, biographer Elliott Gorn draws out her early Roman Catholic connection " including bringing to light her relationship to her estranged brother, Father William Richard Harris, Roman Catholic teacher, writer, pastor, and dean of Toronto's diocese of St. Catherine's, who was "among the best-known clerics in Ontario." Active as an organizer and educator in strikes throughout the country at the time, she was particularly involved with the United Mine Workers (UMW) and the Socialist Party of America. As a union organizer, she gained prominence for organizing the wives and children of striking workers in demonstrations on their behalf. She became known as "the most dangerous woman in America," a phrase coined by a West Virginia District Attorney Reese Blizzard in 1902, at her trial for ignoring an injunction banning meetings by striking miners. "There sits the most dangerous woman in America", announced Blizzard. "She crooks her finger"twenty thousand contented men lay down."

In 1903 Jones organized children, who were working in mills and mines at the time, to participate in the "Children's Crusade", a march from Kensington, Philadelphia, Pennsylvania to Oyster Bay, New York, the home of President Theodore Roosevelt, with banners demanding "We want to go to School and not the mines!" Though the President refused to meet with the marchers, the incident brought the issue of child labor to the forefront of the public agenda. Mother Jones's Children's Crusade was described in detail in the 2003 non-fiction book, Kids on Strike!.
In 1913, during the Paint Creek-Cabin Creek strike in West Virginia, Mother Jones was charged and kept under house arrest in the nearby town of Pratt and subsequently convicted with other union organizers of conspiring to commit murder, after organizing another children's march. Her arrest raised an uproar and she was soon released from prison, after which, upon motion of Indiana Senator John Worth Kern, the United States Senate ordered an investigation into the conditions in the local coal mines.
A few months later she was in Colorado, helping to organize the coal miners there. Once again she was arrested, served some time in prison, and was escorted from the state in the months leading up to the Ludlow Massacre. After the massacre she was invited to Standard Oil's headquarters at 26 Broadway to meet face-to-face with John D. Rockefeller, Jr., a meeting that prompted Rockefeller to visit the Colorado mines and introduce long-sought reforms.

By 1924, Mother Jones was in court again, this time facing charges of libel, slander, and sedition. In 1925, Charles A. Albert, publisher of the fledgling Chicago Times, won a $350,000 judgment against the matriarch.
Mother Jones remained a union organizer for the UMW into the 1920s, and continued to speak on union affairs almost until her death. She released her own account of her experiences in the labor movement as The Autobiography of Mother Jones (1925).
In her later years, Jones lived with her friends Walter and Lillie May Burgess, on their farm in what is now Adelphi, Maryland. She celebrated her self-proclaimed 100th birthday there, on May 1, 1930, and was filmed making a statement for a newsreel. She died at the age of 93 or 100 on November 30, 1930.
Mother Jones is buried in the Union Miners Cemetery in Mount Olive, Illinois, alongside miners who died in the Virden Riot of 1898. She called these miners, killed in strike-related violence, "her boys."

Amidst the tragic, and sometimes fatal, violence directed at early trade unionists, Mother Jones uttered words still invoked by union supporters more than a century later: "[p]ray for the dead and fight like hell for the living." Already known as as "the miners' angel," when she was denounced on the floor of the United States Senate as the "grandmother of all agitators," she replied:
I hope to live long enough to be the great-grandmother of all agitators.
During the bitter 1989"90 Pittston Coal Strike in Virginia, West Virginia and Kentucky, the wives and daughters of striking coal miners, inspired by the still-surviving tales of Mother Jones' legendary work among an earlier generation of the region's coal miners, dubbed themselves the "Daughters of Mother Jones." They played a crucial role on the picket lines, and in presenting the miners' case to the press and public.
Today, many people know the name Mother Jones chiefly because of Mother Jones magazine. For more than three decades, Mother Jones has featured reportage on many of the same social causes dear to Mother Jones herself.
Mary Harris "Mother" Jones Elementary School, in Adelphi, Maryland, is named in her honor.
Students at Wheeling Jesuit University in West Virginia can apply to reside in Mother Jones House, an off-campus service house. Residents perform at least ten hours of community service each week and participate in community dinners and events.

"I was traveling through Illinois when I was invited to stop and sing at a
memorial, there in the little town of Mount Olive. Now, who of note in
American history is buried in the cemetary at Mount Olive, Illinois? I'll give
you a hint: it was a woman, it was the Union Miners' Cemetary. D'you have it
yet? Mary Harris. Mary Harris Jones. Mother Jones.

It's hard for the mind to encompass a life that embraced the presidencies
between Andrew Jackson and Herbert Hoover; why, when Mother Jones was a little girl there were people still alive who remembered the Revolutionary War. And she died on the eve of the New Deal. Her millinery shop burned down in the Chicago fire, and she had heard Abraham Lincoln speak - in person.

Mostly though, Mother Jones was the miners' friend. Down in Kentucky,
Tennessee, West Virginia. Well, the men'd be organizing the underground
workers, the miners; Mother Jones had already organized their wives and led
them over the snow-covered game trails down into the hollows, where, armed with mops and brooms, they drove the scabs out of the coal pits.

Now, Mother Jones wasn't an organizer; she was an agitator. Which meant often enough she was hated as much by the organizers as by the bosses. One time Mother Jones was out in Colorado at the great Ludlow strike. Now that was a strike to enforce the eight-hour day, which the state of Colorado had made a law; but they couldn't enforce it, cause Rockefeller owned the militia. Now, the governor promised not to send the militia into the coal fields, but he
lied, and he did. Mother Jones was in the union hall down there at Ludlow and
word came that the militia had entered the coal fields. Well, she leapt up and
she screamed, "Let's go get the sons of bitches!" and she stormed out. She
didn't look to see if anybody was following her.

Nobody was following her. She just flounced up the road alone and confronted the militia. And that was the year that president Theodore Roosevelt called Mother Jones "the most dangerous woman in America." And she was eighty-three years old. That's some kind of dangerous." 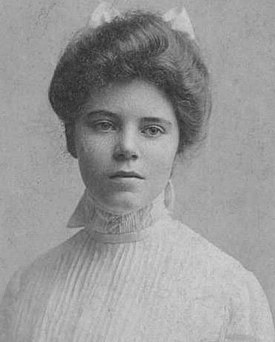 My favorite is Alice Paul. She was disorderly law-breaking, doggedly persistent and dangerously intelligent. When they put her in jail, she went on a hunger strike. When she was force fed eggs though a tube, she made sure it made the press.

In the end she brought the American President (Woodrow Wilson) to his knees-- thus winning the right of women in the US to vote.

Rosetta Wakeman (1843-1864) - Posed as a male to serve in Union Army during Civil War.
http://www.lkwdpl.org/wihohio/wake-ros.htm

I think even just going over all of these with her to choose the best one is going to be an adventure... thanks so much everyone. Belle Starr is another one who is new to me, badass for sure.

The Medieval ones may be fun to dress up as...

Plenty of material here and we'll probably be able to come up with a winner from what has been suggested already but if you're reading and have more ideas, go for it!