Shutting down libraries as the need for them increase


Many libraries go quiet as local budget cuts deepen
Branches in Ventura, Colton and elsewhere face closure, reduced hours and layoffs even as public demand for their free Internet access and resume assistance swells.
By David Kelly and Steve Chawkins

Reporting from Ventura and Colton - As tax revenues plummet and desperate local governments struggle to close widening deficits, some are looking for cuts in quieter places long considered off limits, like public libraries.

Last week the city of Colton shut down its three libraries and laid off nearly 60 employees to help plug a $5-million hole in its budget. Moves are afoot to shutter a library in Ventura, and other communities are slashing library hours.

"I've never seen such devastation in libraries," said Jackie Griffin, head of Ventura County's system. She recently returned from a meeting of Southern California library officials where more than half reported having to institute furloughs, layoffs and other austerity measures.

The bad times for libraries are coming just as more people are discovering how useful they can be.

"The demand for Internet access alone is phenomenal," said Barbara Roberts, head of the Palm Springs libraries, which are now closed on Mondays. "There are lines out the door every morning."

The recession has swept in a wave of out-of-work residents looking for online job listings, Internet access to fill out unemployment applications, and help with their resumes.

"You can't keep a DVD on the shelf," she said. "Families can't afford Netflix. And many people don't buy their books anymore -- they use the library."

Kim Bui-Burton, president of the California Library Assn., described conditions as "extraordinarily difficult." Never lavishly funded, libraries started to falter with last year's credit and mortgage disasters. Now, she said, they are being battered by deep state and local cuts.

In Ventura, the H.P. Wright Library is the city's most heavily used branch, Griffin said. But it's one-third the size of the main library downtown and the county can no longer afford to keep it open.

"As of the end of November, there's simply no money to operate it," Griffin said, pointing out that the state's funding for Ventura libraries fell from $1.1 million in 2000 to $149,000 this year. Hit with a property tax decline of 4.5% this year, the county had to cut its financial support as well. Volunteers raised more than $100,000 but it wasn't enough. A sales tax measure was solidly defeated earlier this month.

Los Angeles libraries are in better shape thanks to the passage of large bond measures over the years. Some 17 million people used the libraries over the last year -- an increase of more than 1 million. But there are still fewer books on the shelves, positions have gone unfilled and an early retirement program is in place.

In San Bernardino County, head librarian Ed Kieczykowski said he was stunned that Colton so swiftly shuttered its libraries.

"I haven't seen a decision like this made so quickly without some sort of vetting process," he said. "We are going to work with Colton to try and get their libraries open. If a community decides that libraries aren't important they will end up shortchanging their citizens."

He said libraries are reducing staff, using more volunteers and having patrons do their own check-outs and fine payments online.

"Next year it will be very, very difficult for us to keep doors open," he said. "If a city council determines libraries aren't important to them, there is nothing we can do."

Colton plans to close the libraries until June 30, 2010. The city has also asked all union employees to accept a 15% pay cut.

More than 100 people showed up at the City Council meeting Monday to argue against the cuts.

"I think it stinks because when a town loses a library, it loses an institution," said Peter Carrasco, a former school principal and chairman of the Colton library board of trustees. "As chairman I wasn't even notified that the library was going to close down. We could have closed one branch, cut hours, opened four days a week. We could have put in different combinations to save money but we never had the opportunity."

Interim City Manager Bob Miller said the financial crisis left the council with no other choice, and he promised to look into ways of reopening the libraries.

"We know we are affecting children and we are impacting families but the budget shortfall was so great that immediate action needed to be taken," he said.

The Colton library saw 160,945 patrons last year at its three branches and received $25,629 in city general funds, Carrasco said. He's received letters of support from the state and national library associations to keep the facilities open.

"I initially felt like resigning when I heard this but now I am going to stay and fight," he said. "I want to get that library open again."

2 Replies
1
Reply Thu 19 Nov, 2009 09:18 pm
@rosborne979,
Our library is almost a social network center. Besides the storehouse of Books, CD's tapes , and movies , we have a very large setup for computer and laptop stations for kids and adults to work. Weve also got it as a media center to download andplay just about anythging of an informational or entertainment nature.

We asked ourselves "What does a library do"? our answer has set us on a 10 year minimum pathway which, we hope will grow and stay ahead of the rapid means by which information is parsed.

Because they are a local community hub of help and knowledge. Not everyone can afford a computer. Not everyone wants to or can afford to buy books. My library has all sorts of job assistance programs as well as literacy classes. People in our community volunteer to teach everything from knitting to how to save for retirement workshops and the library offers a free, comfortable classroom space. We have elderly people who meet on a regular basis for companionship and to get out of their little apartments. There are book groups for people who like to share what they read with other people, face to face, but don't want to host such things in their own home. It's a place children can be dropped off to have a story read to them while their parent goes grocery shopping. It's a place that inspires people to learn. Libraries are a safe zone and inside their walls all citizens, of all ages and backgrounds, have equal access to bettering themselves. Live, caring people cannot be replaced by technology alone.

0 Replies
1
Reply Thu 19 Nov, 2009 10:24 pm
Apparently libraries have come to be something very different than when I was a kid. They sound like social gathering places and information access portals now.

Shutting down libraries as the need for them increases

The conjugation of the verb needs to agree with the subject. I wish to **** you'd learn to write the English language properly and express yourself in a coherent manner.
1 Reply
3
Reply Thu 19 Nov, 2009 10:44 pm
@rosborne979,
Quote:

What is the definition of a library now? What is it's role in the community and what is it mandated to provide for services?

Many libraries are asking that same question. Libraries are no longer just a place for books and microfiche. Technology is going to dominate their offerings, but technology is expensive. There are no mandates, libraries are only as useful and endowed as their communities are willing to make them. I think if libraries did not exist, and someone in our government tried to start them now, the concept would be tossed out as a socialist idea requiring too much taxation. I am most grateful to Ben Franklin for coming up with the idea at a time when Americans wanted to invest in their country and were proud to fund intellectual projects that benefited everyone.
1 Reply
1
Reply Fri 20 Nov, 2009 05:28 am
@Green Witch,
What the Green Witch said could serve as a proper "Mission Statement" for local libraries.
0 Replies
1
Reply Fri 20 Nov, 2009 05:55 am
Our local library was moved to the campus on the Tomball Parkway to save the city upkeep. Some of the publications that need to be current to be useful, such as The Writer's Market, were ancient and worthless the last time I checked.
0 Replies
1
Reply Fri 20 Nov, 2009 07:16 am
@Setanta,
Setanta wrote:

Shutting down libraries as the need for them increases

The conjugation of the verb needs to agree with the subject. I wish to **** you'd learn to write the English language properly and express yourself in a coherent manner.


Perhaps a trip to the local library is in order?
0 Replies
1
Reply Fri 20 Nov, 2009 02:25 pm
Beside fundings cuts the library employees in my area are being handcuff by the lawyers.

A older woman ask for the staff to help her in filling out a government form only to be told that they was no longer allow to offer that form of aid due to concerns over liability.

Then I was having a minor problem with getting my netbook connected to their wifi and offer the keyboard to a young lady that was aiding me at the time.

Another library staff member walk over rapidly and told her that they were not allow to touch a customer computer even with his complete premisssion to do so.

What a world we live in.
0 Replies
2
Reply Mon 3 Jan, 2011 10:16 am
I came across these photos of abandoned buildings in Detroit. I was surprised at the books left in the libraries: 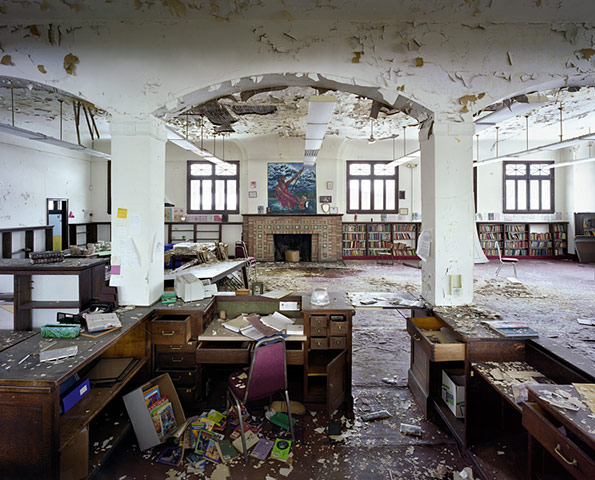 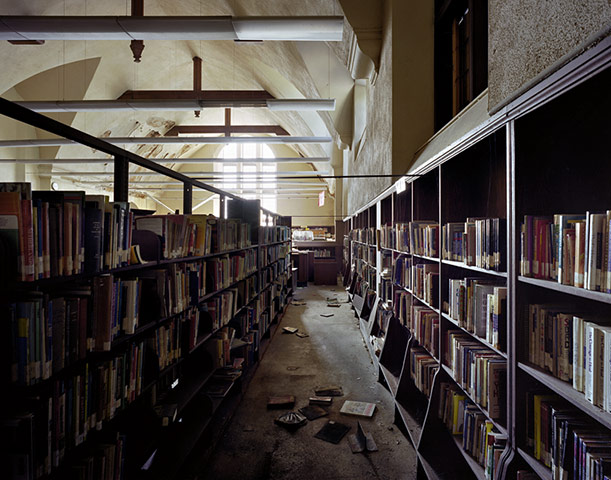 Why wouldn't they at least take those books to a different library or a homeless shelter or Goodwill or something?
2 Replies
1
Reply Mon 3 Jan, 2011 11:05 am
@boomerang,
I am surprise that in a city where the criminal elements ripped out copper piping to sell in such buildings that the books would not had been taken away and sold for a few cents apiece.
0 Replies
1
Reply Mon 3 Jan, 2011 11:44 am
Nothing I can think of is more important than the public library for all kids, but especially those kids growing up poor. Of course the library has computers ( today ) and of course you can receive resume help ( if you're lucky).

But the best thing in the library for poor kids living in the inner city is the chance to read books...all kinds of books. And the chance to do homework on a real desk. And...the libraries have always had really clean bathrooms. A fact important to poor kids who have to share a bathroom with 5-10 other people, while at home.

Some of my best days were spent in the Chicago Public Libraries. Days I'll never forget, especially the little book clubs that were held for Chicago kids in the Summer.

0 Replies
1
Reply Mon 3 Jan, 2011 12:12 pm
@boomerang,
These Detroit photographs looks like a scene out of the town Chernobyl or some place abandoned out of quick necessity.

Why didn't the library sell the books themselves and pocket the money into a rainy day account or something along the lines?
0 Replies